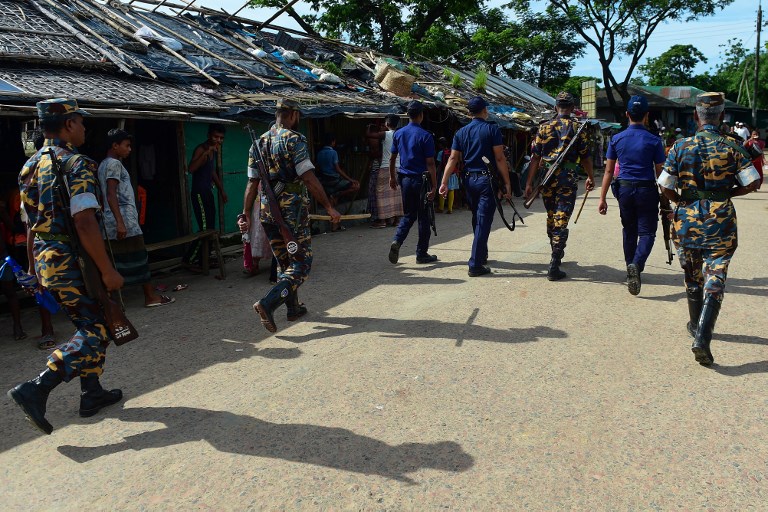 A climate of fear has spread across Bangladesh’s sprawling Rohingya camps as militant groups and criminal gangs compete for control, refugees and humanitarians warn.

Community leaders and female Rohingya in particular are threatened and intimidated for being educated or outspoken about women’s rights – stretching conservative norms to a level of oppression.

Women report being harassed, kidnapped, attacked, or extorted by men they believe are affiliated with Rohingya militant groups or gangs. Some women say they have been told not to work outside the home. Others say assailants demand a cut of their earnings. Most say they are afraid to leave their homes at night, when there’s little security and government-imposed curfews bar aid workers from staying past 4 pm.

For some women, the frustrations and fears have reached a point where silence is no longer an option.

“It’s happening everywhere, but nobody is talking about it,” said Mariam, a Rohingya civil society activist, who asked to be identified by a pseudonym for fear of retaliation.

These threats have long been an issue in the camps, which are now home to some 900,000 people after a Myanmar military purge forced hundreds of thousands of Rohingya from their homes in 2017. But refugees and aid groups say the violence has reached a crisis point in recent months, partly due to government-imposed coronavirus restrictions that have shrunk the number of aid staff allowed in the camps.

“It’s happening everywhere, but nobody is talking about it.”

The UN’s refugee agency, UNHCR, said it’s advocating with the government to restore humanitarian protection services. But individual aid workers who spoke to The New Humanitarian say they feel helpless – unable to guarantee Rohingya volunteers’ safety, or to properly address the issue with camp authorities.

The New Humanitarian interviewed six Rohingya women who say they were told to stop working, were pressured to hand over money, or were physically abused. They said they wanted their stories to be told and for the problem to be discussed publicly.

Similar accounts were corroborated in interviews with a dozen aid workers, researchers, other refugees, and a government official.

“Before coming here, we were scared the Bangladeshis would be rough with us. Now our own people are,” said a woman leader, whose family member was kidnapped for several hours by a group suspected of extorting money in her camp.

None of the women said they dared to seek help from the Bangladeshi police or authorities that oversee the refugee camps, where there is no formal justice system and crimes routinely go unpunished.

“There’s nowhere for us to complain,” said a female community organiser, who is regularly threatened online because she has an education, and is forced to pay “taxes” on her NGO salary. She said she knows of young women who were abducted and worries that she could be as well.

The women believe the threats and abuses are perpetrated by a militant group known as the Arakan Rohingya Salvation Army, or ARSA. But gangs and other criminal groups also operate in the camps, and affiliations are difficult to verify – even for refugees themselves.

A government official in Cox’s Bazar told The New Humanitarian that “simple criminals” were behind the threats to women. “There is no such thing as ARSA in the camp,” he said, asking not to be named because the issue was considered sensitive.

Among refugees, however, the perceived influence of ARSA is so extensive that some dub them “the night government”.

Mariam said the threats against her have grown so severe that she won’t leave her tent home to use the toilets at night.

Weeks ago, she started receiving online abuse after she wrote a Facebook post that supported women’s rights. “They asked me which way I would prefer to be abused,” she said, sitting hunched over on a chair in a quiet corner of a community centre.

Rozina, another Rohingya woman, stopped working with a female empowerment NGO several months ago after she was threatened by people she believes to be members of ARSA.

The men, dressed in black, banged on the door of her family’s shelter one night. They demanded that she leave her job; they told her that it goes against the culture of the mainly Muslim Rohingya community for women to work.

“‘If you don’t obey, we will take you out of your house,’” Rozina remembered them saying.

She reluctantly agreed – well aware of stories from other women who had been kidnapped or abused for not obeying.

Before she fled Myanmar as a refugee, Rozina had worked for an NGO for seven years. Now, fear slowly takes hold of her every evening, when the sun sets and the last aid worker jeep has rumbled out of the vast refugee camps. 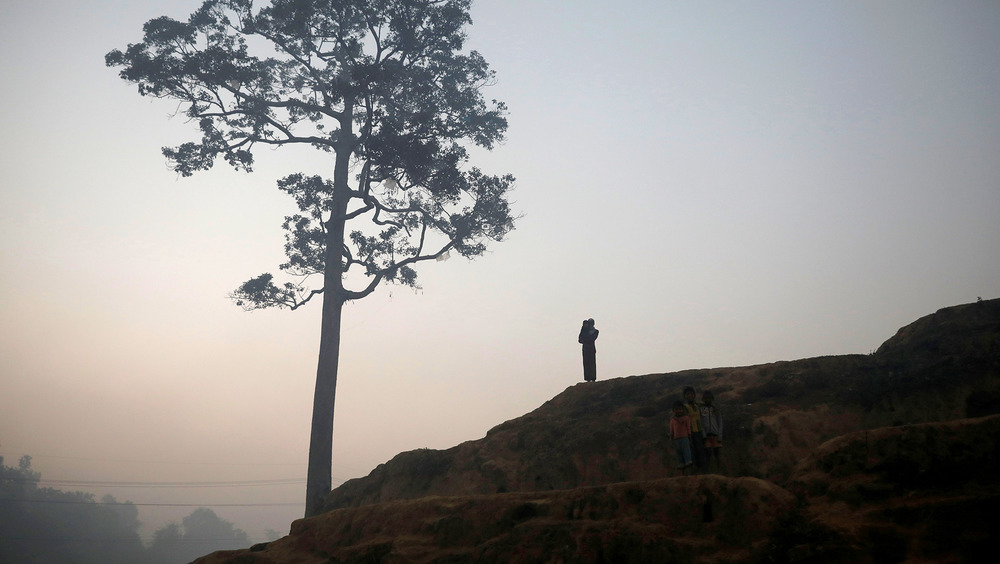 No protection for Rohingya aid volunteers

The security situation varies in each of the settlements’ 34 camps. It also changes over time; intimidation comes and goes in waves. In some camps, female aid workers report being told to pay “taxes” from their NGO job earnings, and payment receipts with ARSA’s logo circulate on social media. In others, the main goal appears to be stopping women from working. Supportive husbands and relatives of educated women have also been targeted.

Aid groups say the threats are disrupting programmes that are highly dependent on community volunteers. A March internal briefing by aid coordinators focused on gender issues said some teachers, health outreach volunteers, and others have stopped working due to the “new wave of threats” and “severe forms of violence”.

Some changes are subtle. Ahead of International Women’s Day in March, for example, UN Women cancelled a billboard campaign that was to feature the faces of several women leaders. “This might have otherwise unintentionally caused them harm,” said Flora Macula, head of UN Women in Cox’s Bazar.

“But this doesn’t mean that we are scaling back our activities with women,” she added.

The internal briefing encourages aid groups to document threats and violence, help women with legal support and relocation if necessary, and to not replace female workers or accept that their rights are restricted.

But for many aid workers, the reality is more complex.

One international aid worker said that when young women volunteers ask her organisation for help, she has to tell them that there’s nothing she can do to protect them. “We are powerless,” said the aid worker, who asked that neither she nor her organisation be identified.

Humanitarian groups are well aware of the threats to women, but they fear making the wrong decision, the aid worker said: They can’t protect female Rohingya workers, so employing them puts them in harm’s way; but not hiring women robs them of purpose and a rare source of income.

Many Rohingya say the worsening insecurity is a key reason why thousands have volunteered to relocate to Bhasan Char, a disaster-prone island on the Bay of Bengal that rights groups call a floating jail. Rohingya refused previous government attempts to transfer to the island, but some 19,000 people have relocated there since December.

Mariam, the civil society activist, wanted to be one of them: She saw it as a way to escape harassment and threats in the mainland camps.

“If I go to Myanmar, there will be a problem. Here, there are problems,” she said. “I told my family, ‘let’s go to Bhasan Char,’ but they didn’t agree.”

Rights groups have urged authorities to boost security in the camps, especially at night. Aid groups say there must be “zero tolerance” when women or their families are threatened or harassed.

But some aid workers also worry that properly documenting the extent of the violence could push Bangladeshi authorities to raise already tight restrictions on the Rohingya.

Authorities have ringed some of the camps with watchtowers and barbed-wire fencing – which may have prevented Rohingya from running to safety during a massive fire that engulfed parts of four camps in March. After the fire, Bangladesh’s home affairs minister said the fences were meant to contain “the worsening situation of law and order in the camps”.

“If Rohingya can be painted as terrorists, this could eventually be used as a good argument by the government why they should leave Bangladesh,” said a UN official, who asked not to be identified in order to speak freely.

Trying to shed light on the problem has also landed Rohingya in trouble. The New Humanitarian has spoken to refugees who fled into hiding after they were threatened for helping to research criminal activities in the camps.

“I said, ‘Even if you threaten to kill me, I will not stop speaking up.’”

Some women, however, no longer want to be silent.

“It has just become unbearable,” said Laila, an active member of Rohingya civil society who also asked that her name not be used.

“Even in conservative Saudi Arabia, there are women who are pilots,” she said.

A few months ago, Laila started receiving threatening voice messages after she called for women’s equality in an aid organisation’s video.

Rather than quit her advocacy, however, she eventually decided to push back: “I said, ‘Even if you threaten to kill me, I will not stop speaking up.’”

Laila continues to share the video on social media. She hasn’t been bothered since.

“When someone is speaking courageously, they stop,” she said.

Journalist formerly based in Yangon covering conflict, displacement, and politics.