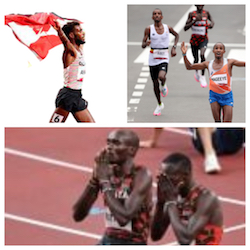 Dahabshiil and East Africa Bank have lauded the top African athletes at the just concluded Olympic Games in Tokyo.

Dahabshiil, a leading African money transfer company in the region with a presence in Somalia, Kenya, Uganda and Ethiopia, said it takes pride in the performance of African athletes in the international sporting showpiece.

Dahabshiil Group of companies which also includes E-Dahab, Somtel, and East Africa Bank have supported marathoner Bashir Abdi who won bronze in the marathon race, and Mo Ahmed who won silver in the 5,000 meters.

Both athletes have African roots having been born in Somali.

The company has been supporting Bashir as he prepared for the Olympics and this paid off when he finished third behind Kenyan Eliud Kipchoge and Dutchman Abdi Nageeye in the marathon.

East Africa Bank and Dahabshiil have been supporting Bashir who has been training with athletics legend Mo Farah.

He (Bashir) previously raced with Farah during the Djibouti half-marathon which offered him a great training ground ahead of the Tokyo Olympics.

Abdi is a Somali-Belgian athlete who qualified for the 2016 Olympics and won silver in the 10,000 metres at the 2018 European Athletics Championships.

Winning an Olympic medal was the icing on the cake for all his hard work and the support he received from corporate institutions like Dahabshiil which ensured he got the best training and competitive opportunities.

The company supports other sports initiatives as well as other community, health, education and development programmes as part of its corporate social responsibilities.