Saturday was an unqualified success for Liverpool, it has to be said.

Not only did the Reds thump Norwich City 3-0 at Carrow Road to kick off their Premier League campaign in style, but Virgil van Dijk made his competitive comeback.

Van Dijk hadn’t kicked a ball for Liverpool in a competitive match since October of last year due to a long-term knee injury.

But the big Dutchman came through last night’s test with flying colours.

As for Van Dijk’s partner in central defence for the long term, well we still don’t really know this.

Jurgen Klopp paired the former Celtic powerhouse with Joel Matip against the Canaries, but options are now booming.

For most of last season, Liverpool were scraping the barrel for centre-half options and Fabinho – a midfielder – spent most of the campaign in defence.

But Klopp had the luxury of having Joe Gomez and £36 million signing Ibrahima Konate on the bench yesterday.

Long term, it may well be Van Dijk and Konate but Matip, it has to be noted, played quite well against City and Klopp won’t be rushing to switch things up at the moment. 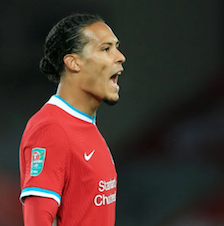