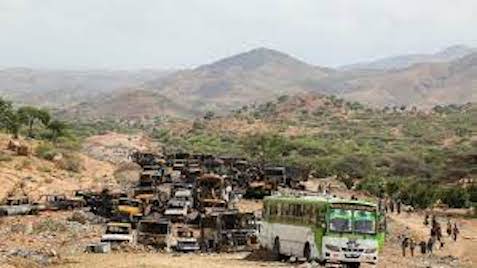 In the grinding war in Ethiopia’s northern Tigray region and the associated humanitarian catastrophe, conflict and centrifugal dynamics have significantly escalated, eviscerating the country’s stability well beyond Tigray. After eight months of fighting and an increasingly effective insurgency, the Tigray Defense Forces (TDF) routed the federal Ethiopian National Defense Force (ENDF) backed by neighboring Eritrea in Tigray. Facing a defeat, Prime Minister Abiy Ahmed declared a unilateral ceasefire and ordered the government’s forces out of Tigray.

However, the windows for badly needed humanitarian access and negotiations between the Tigrayan leadership and the national government rapidly closed. The emboldened TDF has seized parts of the Afar and Amhara regions. In response to the ENDF meltdown, the prime minister intensified efforts to stand up regional ethnic-based militias. Yet Addis Ababa has severely limited capacity to control these paramilitary forces: Over time, they will pose a graver threat to Ethiopia’s stability, territorial integrity, and ethnic coexistence than the Tigray situation. Although reductions of U.S. aid to Ethiopia seemed to have been on the table during USAID Administrator Samantha Power’s trip last week to Addis Ababa, Washington has limited levers to roll back the ongoing dangerous dynamics.

Since 2018, ethnic tensions and competition over state resources and power have grown in Ethiopia, as the country has sought to transition away from three decades of authoritarian rule by the Ethiopian People’s Revolutionary Democratic Front (EPRDF). Though EPRDF rule, dominated by leaders from the Tigray People’s Liberation Front (TPLF), delivered economic growth for years, it became increasingly heavy-handed. In the face of mass public protests, the EPRDF sought a soft transition, choosing as its new leader an Oromo politician, Abiy Ahmed, whom the Ethiopian parliament elected prime minister in April 2018.

Ethnic tensions emerged across the country, including in regions receiving less international attention, such as the Southern Nations and Somali region, and particularly among the Tigray, Amhara, and Oromo. The tensions soon led to incidents of violence, assassinations, massacres, and large internal displacement, as well as regional and national coup plots.

Struggling to control the unrest and stave off demands for faster political liberalization and economic redistribution despite increasingly repressive measures, Abiy took a confrontational attitude toward Tigrayan political leaders. In addition to reducing their disproportionate power, he sought to subject them to accountability for economic and political crimes of the EPRDF regime.

Abiy responded with military force against the Tigrayan leadership, deploying national troops into the region. At first, the military response seemed to be crushing the TPLF leadership, and Prime Minister Abiy refused negotiations with them, insisting on arrests and prosecutions.

Other claimants to power and resources in Ethiopia also took advantage of the conflict. Long resentful of Tigray’s decades of dominance, neighboring Amhara, home to the second-largest ethnic group and the ruling elite during the monarchy that ruled the country until 1974, seized parts of Tigray. Ethnic conflict over local resources, such as agricultural land, water, and access to revenue distributions from Addis Ababa, broke out in the other parts of the country.

However, even though regional actors, such as Eritrean forces, entered the Tigray battlefield in support of Ethiopian National Defense Force (ENDF) — with Eritrea and TPLF long defining each other as determined enemies — military fortunes changed.

Despite seeming ENDF successes in the initial weeks of the push into Tigray, the TDF insurgency became entrenched and increasingly effective by spring 2021. Repression of local populations by ENDF and severe human rights abuses perpetrated against the Tigray population also by Eritrean forces were one factor in the entrenchment and growing heft of the TDF. Pre-existing TPLF military capacities were another.

The ambitions of Abiy and the ENDF to simply crush the Tigray rebellion militarily had all along been misguided. Yet the extent of ENDF’s routing is significant. The federal Ethiopian military forces had long been considered one of Horn of Africa’s most potent military actors, a favorite U.S. counterterrorism ally and the lynchpin of anti-Shabab efforts in Somalia. The likely ENDF quagmire in Tigray instead fairly rapidly turned into an ENDF defeat, albeit a temporary one.

The exposed weakness of ENDF has both local and regional implications. In Ethiopia, the ENDF meltdown does little to deter violent rebellions elsewhere in the country (such as Oromia and the Somali region), which Abiy had presumably intended with his mailed-fist response. In fact, the ENDF defeat may tempt more aggressive moves by various unsatisfied ethnic groups. Regionally, it may reinforce counterproductive dependence of Abiy’s government on foreign reinforcements, particularly Eritrean forces, that are dangerously regionalizing the conflict. And it raises profound questions about anti-Shabab efforts in Somalia, already weakened and struggling.

With the departure of ENDF from Tigray, Tigrayan forces rapidly pushed into the Afar and Amhara regions, on August 5 seizing the important town of Lalibela, home to rock-hewn 13th century churches. In Afar, the TDF seek to take over the crucial land route to Djibouti, a vital artery for landlocked Ethiopia. Suppositions abound that the Tigrayan forces even entertain ambitions to march on Addis Ababa. Like Abiy before, they exhibit little willingness to undertake compromise negotiations, asking instead for the formation of a transitional government and Abiy’s resignation. Neither Abiy nor his power constituencies in Addis Ababa or broader constituencies among the Amhara and Oromo are willing to consider such concessions.

In large parts of the country, strong anti-Tigrayan sentiments dominate and have locally broken out into anti-Tigrayan ethnic violence.

Crucially, Abiy’s resort to ethnic militias as a key response of the weakness of ENDF is dangerous and will likely prove deeply counterproductive. Ethnic militias and paramilitary forces were forming across Ethiopia even before last fall’s TPLF rebellion.

Abiy has now enlisted militia support and reinforced their formation in Afar and other regions of Ethiopia.

However, the militias will prove to be a loose cannon. Traditionally, anti-insurgent militias require central government reinforcement, lest many such groups succumb to defection pressures or are crushed by potent rebel forces: Afghanistan and Mexico provide many an example.

Moreover, like elsewhere around the world, many of the Ethiopian ethnic paramilitary forces have intense local agendas, some directly clashing with Addis Ababa’s. After initially fighting TDF, many of the militias popping up around Ethiopia will turn against the capital, as well as against one another, in their conflicts over resources and power distribution, even though some are likely to accommodate with TDF.

Already, in various parts of Ethiopia, local recruits are refusing to join ENDF, preferring instead to sign up with state paramilitary or special forces, such as the notorious Liyu Police in the long restive Somali region. Numbering hundreds to thousands, such forces can easily discard Addis Ababa’s control.

Meanwhile, the risks of inter-ethnic slaughter are growing significantly. In Ethiopia, a complex multi-sided ethnic civil war would become a massive humanitarian catastrophe and have disastrous effects on the wider Horn of Africa, pulling in regional patrons from the Middle East and beyond.

Already, the humanitarian crisis in the Tigray region is dire, with a blockade by Addis Ababa and, to a lesser extent, insurgent and militia attacks hampering food and medicine delivery. Addis Ababa unconscionably revoked the operating licenses of two major humanitarian actors — Doctors without Borders and the Norwegian Refugee Council — accusing them of siding with the TPLF. Some 400,000 people are in famine-like conditions, another 4.8 million need urgent assistance, and these numbers will grow in September when harvests fail.

Washington’s calls on the Tigrayan forces to withdraw from Amhara and Afar are unlikely to be heeded unless the United States is ready to threaten and impose punitive actions against the Tigray leadership, in the form of visa bans, sanctions, and criminal indictment portfolios. The threat of such sanctions may also be needed against actors in Abiy’s government and regional militia leaders to force their forces back into their home areas and ensure the delivery of humanitarian aid. Cutting non-humanitarian aid to Ethiopia may soon become a tool Washington should also exercise, though Addis Ababa can retaliate by withdrawing forces from Somalia, thus giving al-Shabab more power and room amidst multifaceted crises in the country.

Even so, realistically Washington has little capacity to halt militia formation and the fissiparous unraveling they set in motion. And Abiy is unlikely to stop relying on them unless the Tigrayan forces return to Tigray and compromise negotiations begin. Even then, the militias have already been unleashed.