SomTribune
Home Opinion/Analysis The US, the Taliban and the Stunning Defeat in Afghanistan 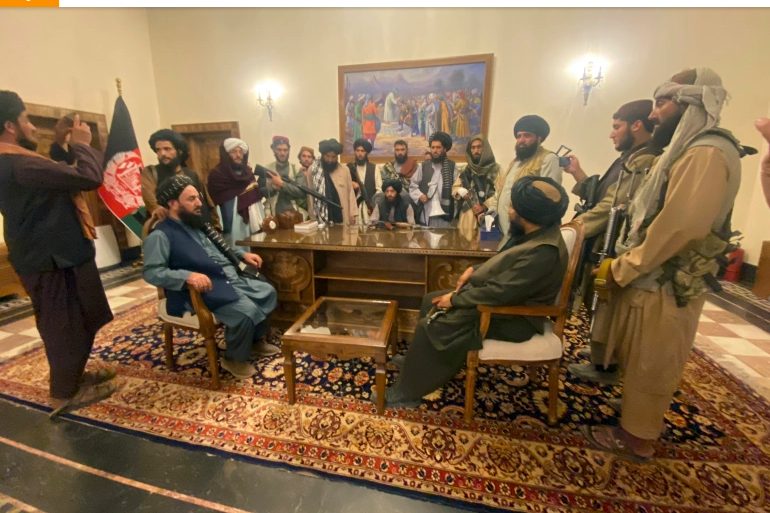 The Taliban victory is a major humiliation for the US, but perhaps that’s the silver lining of the Afghan tragedy.

Last week’s turn of events in Afghanistan has been utterly shocking but hardly surprising.

The Taliban’s blistering takeover of the country’s main cities was breathtaking in its speed and ease, culminating in their march on the capital almost unopposed as President Ashraf Ghani fled the country.

It was expected, yes, but no so rapidly, so victoriously, so humiliatingly.

Since the war began almost 20 years ago, successive US administrations have ignored the writing on the wall, prolonging the inevitable, while failing to prepare for it.

It took the US and its allies only two months to “liberate” Kabul from the grip of the Taliban in 2001, and less than two years for the smug Secretary of Defense, Donald Rumsfeld, to declare at a news conference in Kabul on May 1, 2003, that “major combat activity” was over.

But it was not over. Not by any measure.

As the US occupation stumbled, the deposed Taliban regrouped and launched a merciless asymmetrical war on the US and Afghan government forces for much of the following two decades.

But successive US administrations deliberately deceived the American public into thinking everything was dandy on the war front in Afghanistan, when in fact, it was anything but – just as they did previously during the Vietnam war.

The scene of US personnel fleeing Kabul last week, just as they did Saigon in 1975, was downright eerie.

The US has suffered a few thousand casualties, but tens of thousands of Afghan security forces have died, and an untold number of civilians have become the real victims of the war, which has destroyed the lives and livelihoods of countless families and communities.

During the past decade, the Taliban has demolished Washington’s “clear, build and hold” strategy, terrorising entire communities that cooperated with the US forces.

The total collapse of the Afghan government forces following the withdrawal of the remainder of US combat troops has left many in Washington and other western capitals scratching their heads for answers.

Some of these answers have been readily available by the “we-told-you-so” war sceptics, who long warned that Afghanistan was a proven “graveyard of empires”, whether it is the 19th-century British empire or the 20th-century Soviet empire.

In the words of the ancient Greek Macedonian emperor, Alexander the Great, Afghanistan is “easy to march into but hard to march out of”.

But an overconfident post-Cold War America was in no mood for such historical references after the 9/11 attacks hit at the heart of its economic and military symbols in New York and Washington and killed almost 3,000 Americans.

Those of us who warned against waging vengeful wars and occupying faraway lands as a way to combat “global terrorism” and establish a “pax America” in the greater Middle East, were ignored.

The Bush administration’s decision to launch a second disastrous and costly war against Iraq left Afghanistan in dire straits, and for all practical purposes, Washington was unable to recover the initiative afterwards.

The failure of the Obama administration’s Afghanistan-Pakistan strategy of troop surge signalled the beginning of the end of the war. From then on, only its pride prevented it from recognising the obvious and acting on it.

The Trump administration’s decision to engage the Taliban diplomatically appeared to be the beginning of the US surrendering the country to the hardline group in part or as a whole.

The Biden administration’s decision to speed up US withdrawal regardless of the diplomatic, military or strategic outcome, left the Afghan government to fend for itself, while knowing all too well it could not last long.

But was it really inevitable?

It is hard to say what would have been the outcome if the US remained focused on Afghanistan, rooting out al-Qaeda and paving the way towards a more stable regime with the help of neighbouring countries. Even Iran offered to help during those early years.

But the Bush administration’s decision to launch the “global war on terror”, including the disastrous war on Iraq, eventually downgraded and bungled its Afghan mission.

Afghanistan was left on the backburner and came to be known as the “forgotten war” as US attention focused on Iraq. Then came the 2008 financial crisis further forcing Washington to turn inward, weakening its foreign commitments.

But even if the US had remained totally focused on Afghanistan, there was no guarantee that it could have accomplished the more modest mission of stabilising the country.

In fact, since World War II, the US has failed to decisively win any major war, whether in Korea, Vietnam or Iraq.

Moreover, geography has long trumped strategy in such asymmetrical conflicts as that of Afghanistan, where local forces and regional dynamics outperform and outmanoeuvre the more sophisticated imperial forces deployed from across the seas.

Such is the lesson most 20th-century colonial powers learned the hard way, as any military historian would tell you.

Afghans knew that the US may have controlled the timings of its deployments but the Taliban had the time. And it had the will.

The US may have won certain hearts and minds, especially in Kabul, where it spent untold sums of money, but Afghans knew deep in their hearts that America will depart sooner or later, and they would have to deal with the Taliban.

It did not help that their successive governments were rather inept and corrupt, garnering little or no confidence. Their complete dependency on US military and financial aid ensured they would never be able to try to stand on their own.

The same applied to the armed forces. Despite outnumbering the Taliban four to one, corruption, nepotism and neglect reigned high, especially among the top brass.

In sum, this may have been inevitable considering the US blunders and its partners’ failings, but it did not have to be so utterly humiliating.

But then again, the humiliation may be the one silver lining after the two decades of tragedy, teaching Washington to avoid war at all cost in the future, especially those horrific wars of choice in the greater Middle East.