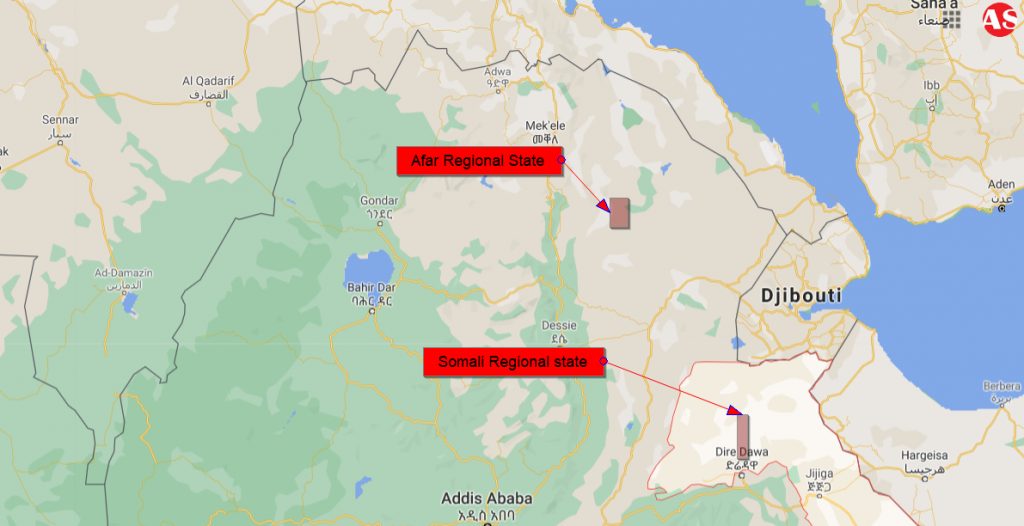 Conflicts between Somali and Afar communities in Ethiopia have been reoccurring since Mustafa Omer was unexpectedly named president of the Somali Regional State in 2018.

Although border towns between the Somali and Afar regions have been under dispute for a couple of decades, direct conflict and military engagement between the two regional forces became more common after the installation of Mustafa’s interim administration.

Afar and Somali people are neighbouring communities who share similar cultures, faiths, and other traditions. Both communities desire a peaceful coexistence. However, it appears as though leaders in Addis Ababa, Semera, and Jijiga have made a habit of exacerbating violence for various political agendas.

In the most recent example, over 300 Somalis were killed by Afar militias – aided by Afar regional forces – in a conflict that began on 24 July. Following the incident, the bodies of Somali victims were found littered all over the roads of Garba Isse.

Somalis living in Garba Isse were unarmed and no Somali regional force member was present in the area, as they had been deployed to Amhara regional state to support federal and Amhara forces in the Tigray war.

As they took full control of the small town, Afar militias and authorities prevented the burial of Somali victims, according to family members of some victims that I have contact with.

Somali regional forces were mobilized to enter Garba Isse and push out Afar militias following the attacks, which was initially successful. After carrying out the short-lived campaign to free Garba Isse, Mustafa ordered the Somali forces to vacate the town. This decision permitted Afar militias to capture Garba Isse once again and continue killings.

Although Mustafa is yet to give a statement denouncing the attacks or express condolences, protests condemning the violence against Somalis in Sitti Zone and Garba Isse were conducted in numerous parts of the Somali region.

A senior Prosperity Party (PP) member and Somali federal representative, Dr Abdiwasa Bade, posted on his personal Facebook page that those responsible for the inter-ethnic violence should be held accountable and that Somali victims must be supported.

Somalis around the world showed their support to Dr Abdiwasa. This outpouring of support demonstrates how members of the Somali community are desperate for their pain and deaths to simply be acknowledged. Sadly, Dr Abdiwasa was ordered or pressured, according to some colleagues, to remove his personal yet controversial Facebook post, and he did so less than two days later.

Some Somali locals that I have contact with suspect that this gruesome carnage is not just a Somali-Afar border conflict. Rather, they think it could be an incident that has been, to an extent, orchestrated, exacerbated, and used by the administration for ulterior gains in the Tigray war.

Following the incident, officials in the Somali region and diaspora activists with large followings and close ties to the administration instrumentalised the massacre. The goal was purportedly to motivate protests condemning the violence, but there was also a hidden agenda to encourage blocking the trade route connecting Djibouti’s port to Ethiopia.

The Djibouti route being Ethiopia’s main trade and humanitarian route, blocking the rail means blocking aid going to Tigray. This shouldn’t be surprising since numerous reports have shown that the Ethiopian government is willing to engage in whatever nefarious activity so long as it deems it helpful in crushing the TPLF.

The government, of course, understands that directly blocking aid from the most important import, trade, and humanitarian route would cause an international uproar, risk sanctions, and exacerbate political instability, and this explains why PP officials felt the need to come up with a more sophisticated, malicious plan.

The Somali youth protestors were largely successful in blocking the road and rail routes. However, one must recognise that the blocking of Ethiopia’s main trade corridor is well beyond the capacity of few local protestors. And, this further indicates that this has indeed been orchestrated by government officials.

One might wonder why PP officials would block Ethiopia’s main trade route, a move that negatively impacts the economy and risks further destabilisation of the country. As this demonstrates, the well-being of Ethiopian citizens is perceived by PP officials as being secondary to other more pressing concerns. At the moment, the biggest concern for Abiy’s regime is the TPLF.

Abiy has arrested or neutralised almost all political actors opposing his administration and his party’s authoritarian ambitions. In his eyes, it is only the Tigray region and the TPLF that are standing in his way – and, by extension, the Tigrayan people.  Thus, he thinks the TPLF must be crushed at whatever cost. Whether that is done via bombings, executions, displacement, or the blocking of Ethiopia’s main trade and humanitarian route, the consequences of these disastrous efforts are of little concern to the Nobel laureate.

Sadly, to the federal government, the unimaginable suffering the wider Tigrayan population goes through is negligible as long as they submit and TPLF is destroyed.

Finally, it must be stressed that such cruel plays from politicians where they use the death and suffering of innocent civilians, women, children, and the elderly for making political advances should come to an end. Also, border disputes between Somali and Afar communities require urgent attention, should be resolved in a peaceful manner, and the victims on both sides should receive all the necessary support.

Hafsa Mohamed is the founder and executive director of Maandeeq Women’s Organization (MWO), one of the first women empowerment organisations in the Somali Region of Ethiopia. Her developmental mission in Ethiopia is to achieve sustainable development, advance institutional infrastructures, reform education systems, and mobilize socioeconomic empowerment for all underserved groups (particularly women, youth, and differently-abled persons).