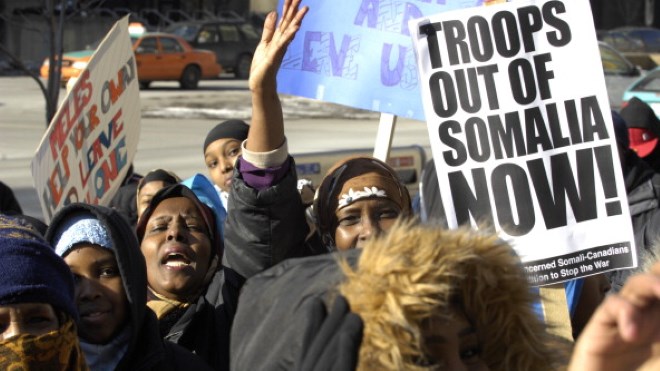 “War is God’s way of teaching Americans geography,” as a popular saying goes.

Perhaps nowhere does this apply more than Somalia. Few Americans can point to the country on a map. And for the educated ones among them, the U.S. pop-cultural propaganda items, such as the movie “Black Hawk Down” and the video game franchise “Call of Duty,” are probably the only exposure they have to the African country.

Even fewer Americans are aware that their elected representatives are currently bombing the country with no accountability and no end in sight.

After the 9/11 attacks – in which the U.S. says about 3,000 Americans were killed by Al Qaeda, a radical Islamist Jihadist organization composed of remnants of groups, which America had itself once funded to fight the Soviets – the U.S. allied with Ethiopia as part of its “War on Terror,” a Christian country and the traditional rival of Somalia, a Muslim nation.

Western nations, especially the U.S., are highly skilled at exploiting existing conflicts between states, and it worked this time too. The U.S. backed the Ethiopian invasion of Somalia in 2006 to depose the latter’s government, plunging the country into chaos. As usual, this U.S. proxy war helped increase militancy in the region. Analysts estimate that around 650,000 people have been killed in Somalia since 2006.

Unlike Iraq, Syria, or Afghanistan, images of which sometimes find their way to U.S. television screens (albeit in pro-U.S., racist fashion), Somalia is one of America’s most invisible “interventions,” similar to its involvement in Niger, another country most Americans haven’t heard of or read about, where four U.S. soldiers were killed in 2017.

Somalia has been one of America’s most silent, understated imperialist projects. The heavily subdued and propagandized U.S. population, never exactly keen on holding its government to account, has been more or less kept in the dark.

The U.S. media has been ordered not to pay too much attention to the subject. For an increasingly poor and crime-ridden public already finding it difficult to keep up with America’s countless wars, Somalia has simply slipped under the radar.

The U.S. bombed Somalia on January 19 this year, when Donald Trump was the leader. He also removed the country’s long-standing constraints designed to prevent civilian casualties, allowing the U.S. commanders to target local militants without providing proof that they posed a specific threat to Americans.

In an example of typical American savagery, civilian deaths were allowed if deemed necessary.

By removing such checks on the military’s power placed by Barack Obama, Trump sought to escalate the U.S. imperialism and murders in African nations. No wonder he bombed Somalia more than George W. Bush and Obama combined.

Then the U.S. bombed Somalia again on July 20, this time under Joe Biden. And then again three days later on July 23. And then again on August 1. The freedom-loving U.S. public and the holding-truth-to-power U.S. media uttered a collective yawn.

These are just the airstrikes. The U.S. military ground operations are often not reported by the country. Moreover, the Central Intelligence Agency (CIA) is known to carry out its own operations and strikes, which are neither publicly confirmed nor denied.

The U.S. did not admit to any civilian casualties (it almost never does), a claim contested by Amnesty International, which has pointed out multiple civilian deaths and injuries in Somalia over the years.

The U.S. is all too happy to cite “human-rights organizations” such as Amnesty as the gospel truth when the organizations criticize nations it doesn’t like, such as China or Russia, but prefers to ignore them when they point out its own war crimes.

According to the Airwars monitoring group, the U.S. reportedly carried out 93 strikes in Somalia (of which 61 were declared) in 2019, 72 strikes (with 54 declared) in 2020, and 15 strikes (with 11 declared) so far in 2021. While the U.S. admits to only five civilian deaths in its 15-year-long campaign in the country, actual estimates of deaths from its airstrikes range from 70 to 143.

Little of this is reported by the obedient U.S. media, which claims to hold the government “accountable.” The U.S. “journalists” and pundits are as silent as what they call the “international community” (i.e. the U.S. allies), nations that pretend to care about human rights but have barely uttered a peep about Somalia.

While the Delta variant surges at home and the U.S. struggles to meet its vaccination targets, one thing is clear: at least for the foreseeable future, there is nothing stopping the superpower from bombing Somalia.