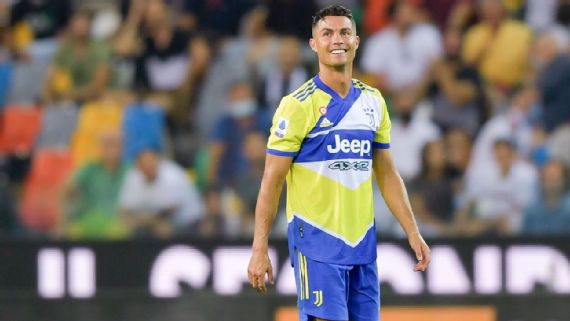 Cristiano Ronaldo has reached an agreement with Manchester City over a sensational transfer from Juventus to the Premier League champions, according to AS.

The Spanish sports daily reports that Ronaldo has struck a deal with City, who have offered him a two-year contract with a salary of €15 million per season, about half of what he earns in Turin.

Sources have told ESPN’s Rob Dawson that City had not dismissed the possibility of signing Ronaldo after Harry Kane committed his immediate future to Tottenham Hotspur on Wednesday. Sky Italia’s Gianluca Di Marzio reported on Wednesday that Ronaldo’s agent, Jorge Mendes, had flown in to settle Ronaldo’s future, with the Portugal captain wanting to move and Juventus willing to let him go.

However, while Ronaldo has agreed terms with City, no deal has yet been struck between the team and Juventus, who are seeking a €25m transfer fee for the 36-year-old and would be interested in signing City forward Gabriel Jesus. But City do not want to pay a transfer fee or let their Brazil international leave this summer.

Last week, Ronaldo lashed out over the transfer rumours, accusing people of being “disrespectful” yet stopping short of committing his future to Juventus. The ex-Manchester United man has been also linked with a return to Real Madrid as well as a move to Paris Saint-Germain.

With Manchester City manager Pep Guardiola revealing that he is likely to leave the club when his contract expires in 2023, as he wants to take a break before venturing into international football, what impact will have have on the Premier League champions’ future transfer business?

15.38 BST: Gareth Southgate has expressed his relief at Harry Kane‘s club future being resolved before England begin their preparations for World Cup qualifying next month.

Kane confirmed on Wednesday that he will be staying at Tottenham after failing to secure his desired move to Premier League champions Manchester City. Kane made his first appearance of the season in Tottenham’s 1-0 win at Wolves on Sunday and is likely to be involved on Thursday evening as Spurs host Pacos de Ferreira in their Europa Conference League playoff second leg.

Speaking earlier in the day at England’s squad announcement, Southgate said: “Harry got into the game at the weekend. I’m expecting that he’ll play a fair part tonight. The good thing from our point of view is it looks as though everything is resolved and settled club-wise now. So he’s got a clear focus now and I’m sure he is looking forward to getting out on the pitch with Tottenham and then with us next week.

“I don’t know if there might be other players who might possibly be on the move before we meet. That often is the case in September as well. But in terms of Harry’s situation, it is settled, it looks like he is going to be a Tottenham and that is obviously fantastic for Tottenham especially.”

England face trips to Hungary and Poland either side of a home fixture against Andorra as Group I commences with next year’s finals in Qatar just 14 months away.

14.56 BST: LAFC striker Carlos Vela has hinted that a return to Europe is a possibility at the end of the MLS season.

Vela, 32, is out of contract at the end of the year, and the former Arsenal and Real Sociedad player admits he has thought about going back across the Atlantic.

“Obviously I miss playing in Europe,” Vela told TUDN at Wednesday’s MLS All-Star game against Liga MX, which he missed through injury. “It’s my last year here and then we’ll see what can happen. It could be [a return to Europe].

“First [I need to] recover from this injury at this difficult time. But, like always, with a good attitude and positivity, I hope that when I return I can be ready to help the team and reach the playoffs.”

14.19 BST: Barcelona are still pursuing the option of signing another forward before the transfer window closes, various sources have told ESPN’s Moises Llorens and Sam Marsden.

Due to Barca’s precarious financial situation, sources admit it will be “complicated” to get a deal over the line, but the club are assessing their options.

Coach Ronald Koeman has said publicly he wants another attacker. Memphis Depay and Sergio Aguero have already arrived this summer but Lionel Messi left for Paris Saint Germain. Barca also have Antoine Griezmann, Martin Braithwaite, Ousmane Dembele and Ansu Fati. However, Aguero, Dembele and Ansu are all currently out with injuries.

Ansu is expected back in September, but Barca don’t want to put too much pressure on the 18-year-old after nine months out with a knee problem. Therefore, the club’s recruitment team are looking at cheaper options or players available on loan, which hugely reduces the amount of players available to them.

Barca’s cash crisis, coupled with LaLiga’s spending limits, has complicated the registration of their new signings with the league this summer. However, Gerard Pique’s pay cut allowed them to register Memphis and Eric Garcia, while reductions for Sergio Busquets and Jordi Alba should allow them to register Aguero and any other potential arrivals this week.

Correa has signed a four-year contract with the Nerazzurri, who have brought him in on an initial loan deal with an obligation to make to transfer permanent.

The 27-year-old, who scored 22 goals in three seasons at Lazio, was part of the Argentina squad that won the Copa America in the summer.

Sources have told ESPN’s James Olley that the Gunners are seeking to offload several members of their squad after spending more than £130m on new signings, and there had been speculation that the club were willing to listen to offers for their leading striker.

Aubameyang scored a hat trick on Wednesday as Arsenal thrashed West Brom 6-0 in their Carabao Cup second-round tie at The Hawthorns (stream the replay on ESPN+ in the U.S.) on the same day Manchester City’s pursuit of Tottenham Hotspur forward Harry Kane collapsed.

Sources have told ESPN that City are still in the market for a striker, but when asked at a news conference on Thursday whether he was concerned they could move for Aubameyang, Arteta replied: “I don’t know. Pierre-Emerick Aubameyang is our player and he will remain here.”

12.58 BST: Harry Kane is reportedly angry with Tottenham Hotspur chairman Daniel Levy for refusing to negotiate with Manchester City over a potential transfer, and he is now seeking a bigger contract with a release clause from the club.

Kane confirmed in a social media post on Wednesday that he is staying at Spurs “this summer” despite the striker telling them he wanted to leave and the Premier League champions preparing a bid for the England captain. The 28-year-old’s announcement brought to an end a saga which began with the striker believing he had a verbal agreement with Levy that he would be allowed to leave if a suitable bid was received.

Tottenham valued Kane in excess of £150m and were hugely reluctant to enter into negotiations given the striker had three years left on his £200,000-a-week contract and is of central importance to the team. Sources told ESPN’s James Olley and Rob Dawson that City were willing to offer £100m and potentially include players as part of any deal, although sources at both clubs denied a formal offer was ever made.

The Daily Telegraph reports that Kane is “angry” and “deeply upset” with Levy for not allowing the two clubs to negotiate over a potential transfer. The Times, meanwhile, claims that he now wants improved terms on his contract — which expires in 2024 — worth £400,000-a-week and with a release clause inserted.

12.24 BST: Chelsea are hopeful of completing a deal worth in the region of €50m for Sevilla defender Jules Kounde as defender Kurt Zouma closes on a move to West Ham United from Stamford Bridge, sources have told ESPN’s James Olley.

Talks with Sevilla over Kounde have been ongoing for some time, but Chelsea needed to offload a centre-back first before pushing ahead with a move. West Ham agreed a €29.2m (£25m) fee for Zouma earlier this month, but personal terms were an issue with the 26-year-old reluctant to leave Stamford Bridge.

Zouma has two years left on his Chelsea contract and has turned down moves in previous years to fight for his place at the club. He was left out of Thomas Tuchel’s lineup for their opening two Premier League games but did start their UEFA Super Cup win over Villarreal.

Sources told ESPN another stumbling block came as Zouma asked for a wage in the region of £120,000-a-week — around double what he currently earns at Chelsea — to even consider moving to West Ham.

However, negotiations have progressed positively and Zouma underwent a medical on Thursday as all parties near an agreement. The deal is not yet finalised but Chelsea are optimistic that Zouma will depart, allowing them to press ahead with their pursuit of Kounde before Tuesday’s transfer deadline.

Van de Beek signed for United from Ajax in a £35m transfer last September after being linked with several of Europe’s top clubs, but has started just four Premier League games since arriving at Old Trafford.

The Times reported this week that the 24-year-old’s representatives have been approached by clubs during the summer transfer window, but Van de Beek is not willing to consider any offers as he remains committed to succeeding at United. However, Berbatov believes the Netherlands international needs to move to revive his career.

“I don’t think we’re going to see any more playing time from Donny van de Beek,” Berbatov told Betfair. “It’s a really strange, disappointing and surprising situation. They spent around £35m on him and, to pay that for a player who isn’t starting many games, doesn’t make sense. I’m not blaming the player at all, but for me it’s one of the most disappointing transfers ever.

“He has got a lot of quality. I don’t like it when clubs buy for the sake of buying and this is one of those situations. I’m sure he’s banging on the manager’s door and asking questions.

“I think if he’s not happy, Van de Beek should push to leave. His place in the national team is at risk, especially now with Louis van Gaal in charge. Van Gaal is a disciplinarian who like his players to play football.”

10.56 BST: Barcelona and Ousmane Dembele are close to reaching an agreement over a new contract, according to the Catalan newspaper Mundo Deportivo.

The report says there has been a breakthrough in talks with Dembele’s camp and that Barca will focus on closing the deal once the transfer window closes next week.

Dembele, 24, is sidelined until November with a knee injury picked up at Euro 2020 while playing for France. Prior to that, talks over a contract extension had been at a standstill.

Barca believed the forward wanted to run his deal down and leave for free next summer, when his current terms expire, pocketing a huge signing on fee in the process.

However, his latest injury setback has cooled any real interest from elsewhere for now and Lionel Messi’s move to Paris Saint-Germain has increased Barca’s need to keep their best attackers at Camp Nou.