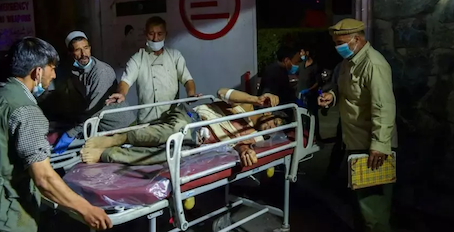 As a new era of Taliban rule began in Afghanistan following the withdrawal of US troops, Somalia’s jihadist group al-Shabaab cheered. They announced three days of celebration in the southern districts they control.

As with other Al-Qaeda affiliated extremists around the world, the Shabaab felt encouraged that the toppling of the government in Kabul could be re-enacted in Mogadishu.

While support for the Taliban in Africa is no surprise, their win is something of a victory flag to be waved around by their understudies in the continent emboldening them.

The UN Secretary-General Antonio Guterres had already warned of an “alarming” expansion of affiliates of the so-called “Islamic State” throughout the continent on the back of the situation in Afghanistan.

In the vicinity of East Africa, al-Shabaab is the group to watch, however. Other Somali al-Qaeda affiliates such as the Jamaat Nusrat al-Islam wal-Muslimin (JNIM) don’t tend to garner as much attention, though they are still to reckon with.

There are also the Islamist extremists in parts of the Democratic Republic of Congo and those in Mozambique, who are currently being scuttled by the Rwandan and Mozambican troops, among others.

These deserve close watch and curtailment, but experts generally agree the Shabaab have the most capability.

Experts such as Samira Gaid of the Mogadishu think-tank Hiraal Institute draw a clear parallel with the Afghan extremists.

Al-Shabab has been using Taliban-like tactics, she told The Economist.

They undermine the government and international forces with terrorist attacks, while running a shadow government, even in government-controlled areas, to pay their fighters.

Much like the Taliban, they thrive on providing residents with a modicum of security beyond the gift of a failing state.

The group has since the mid-2000s been fighting to topple Somalia’s government and impose strict Sharia law in the country.

It has not succeeded only because of the active presence of the UN-backed African Union force in Somalia (AMISOM).

But despite offering training to the Somalia National Armed (SNA) Forces, the SNA remain even less prepared to halt a potential militant offensive than those in Afghanistan.

The implications are clear: If AMISOM was to be withdrawn as mandated by December 2021, the government in Mogadishu would likely fall – some say faster than Kabul did, mainly because of al-Shabaab’s infiltration in the city.

Experts in a BBC interview predict that Al-Shabaab’s seizure of the city could take as little as 12 hours, though a period of days or weeks seems more likely.

Taking the rest of the country would probably likely also be short work. The recent UN Panel of Experts report to the Security Council on terrorist groups notes how, during the first half of 2021, “[Al-Shabaab] encountered little resistance in capturing several towns and villages in areas that had previously been hostile… [the] United States military withdrawal and the partial drawdown of the African Union Mission in Somalia left Somali special forces struggling to contain Al-Shabaab.”

Somalia is therefore in dire peril. The lessons the Taliban takeover has dispensed have focused on what could happen in such countries if international support was to be withdrawn without due consideration of the consequences.

It is therefore a good thing that, in renewing the mandate of AMISOM until December, the AU Peace and Security Council reaffirmed “commitment to review the AU’s engagement in Somalia post 2021.”

It’s the international community’s call not to allow the country go the Afghanistan way. The European Union should reconsider cutting back its funding while the UN should continue with the support until Somalia is stable, however long it takes.

The country’s politicians should also put their act together, beginning with ensuring a new government is elected and stamp out the endemic corruption.

The politicians should also not forget that extremists, who the al-Shabaab exemplify often provide the social and other services that have collapsed in broken countries, which they then exploit to win support.