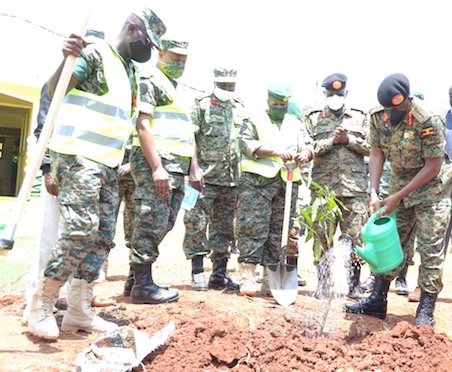 A total of 1848 officers and men of the Uganda People’s Defence Forces (UPDF) under the Battle Group (BG) 33 were at the weekend flagged off to Somalia by the Chief of Defence Forces (CDF) Gen Wilson Mbasu Mbadi, at Singo Peace Support Operation Centre in Nakaseke District.

The new troop is slated to replace BG30 on mission in Somalia.

When Uganda first engaged its troops under the Africa Mission to the war torn Somali land in 2007, the Battle Group built its success on the foundation of discipline that partly explains the success story in pacifying Somalia against the insurgency groups.

Gen Mbadi described any case of indiscipline including the sale of food rations and weaponry to the Somali people by any member of the Battle Group as madness.

“You have undergone the required training and orientation on the peace keeping mission in Somalia. The Somali people have their own culture and this is the reason why you undergo a vigorous training before you step foot in Somalia. When you sell food and weapons, you are acting as a mad person because these very items will be used against you,” the CDF said.

“The ideological orientation makes you complete and ready for mission. You represent Uganda and you have the duty to keep our flag high as good ambassadors. The training at the Peace Support Operations Training Centre gives you the right picture of what you expect to encounter in Somalia as peace keepers. You have been deployed because you have the enhanced skills to handle the situation in Somalia and stick to professionalism as a soldier under the UPDF,” he added.

Trainings for the UPDF peace keepers at the Peace Support Operations Training Centre unlike the earlier years when a bigger percentage of the instructors were not under the UPDF, 95 percent of the training is now undertaken by the Force.

The training centre with the help of the UPDF Engineering Brigade has aided in the improvement of the infrastructure including the construction of trainee dormitories, administration offices among others.

“The training did not stop when the Country went into the Covid-19 pandemic lockdown because we had built our own capacity to safely handle the situation. The trainees were not allowed to go for leave back home and this partly explains why we remained safe at the camp,” Brig Bonny Wolimbwa the Commandant at the Peace Support Operations and Training Centre said.

Uganda maintains one of the biggest peace keeping forces in Somalia as part of the multinational Africa Union force meant to pacify Somalia.

The other African countries contributing to the peace keeping mission under the AMISOM include Kenya, Djibouti, Burundi and Ethiopia.

The troops are in Somalia under the recent United Nations (UN) Security Council resolution 2568 that extended the mandate for the troops deployment in Somalia under the AMISOM to prepare and pave way for the Somali National Army to take Charge of the country’s security that has for years been under threat from the Al-Shabaab militants.