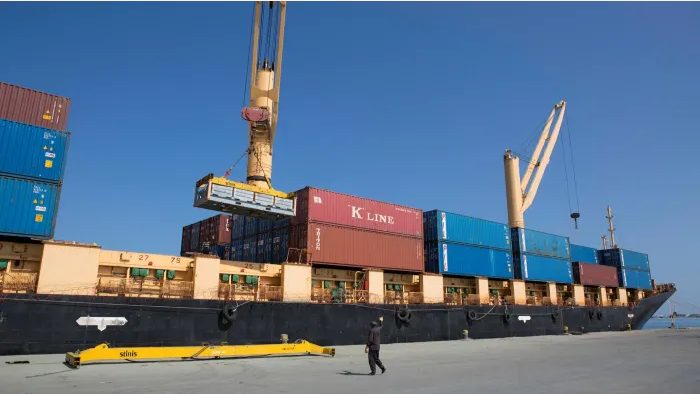 Anchored at the deepwater port of Berbera, an Ethiopian-flagged ship offloads its cargo of sugar and rice coming from India in what officials hope is a sign of a fresh era of trade in the self-declared east African state of Somaliland.

Thanks to a $442m investment from the Dubai-based ports operator DP World, Berbera is shaping up to regain its centuries-old trade lustre, setting up a battle of ports over a maritime thoroughfare traversed by about a third of ships worldwide. The revamped port of Berbera now offers an alternative to Djibouti as a gateway to lucrative trade routes through the Suez Canal.

Berbera was once the capital of the British Somaliland protectorate. For centuries, until a civil war destroyed much of its facilities three decades ago, it was a hub of maritime trade between the Horn of Africa, the Arabian peninsula, and India thanks to its key location on the Gulf of Aden opposite Yemen.

Now, “we are getting another chance to become an international business centre,” said Berbera’s mayor, Abdishakur Mohamed Hassan. Outside his office, rows of camels and herds of goats are heading to the dock, destined for the port of Jeddah in Saudi Arabia. “There will be a healthy competition between the neighbouring ports,” he added.

Berbera’s terminal, which opened in June, can handle the world’s largest ships. Its container capacity increased from 150,000 20ft containers (TEU) to 500,000 TEU annually, and work is already under way for an expansion to handle up to 2m TEU a year. The main aim of the port is to serve Ethiopia, Africa’s second most populous country, which needs “multiple gateways”, according to Supachai Wattanaveerachai, chief executive of DP World’s port of Berbera.

Eritrea broke away from Ethiopia in 1993, leaving the latter landlocked and reliant on neighbouring Djibouti for port access. Djibouti had remained “almost entirely free of competition” in the region, according to the World Bank which in a report said almost 95 per cent of Ethiopian cargo passed through it. The remainder goes through Port Sudan, in Sudan, and Mombasa, in Kenya. Workers unload food from a ship before loading trucks at Berbera port, in Somaliland

A 2021 global container port performance index by the World Bank and IHS Markit rated Djibouti as the most efficient port in Africa, measured by minutes per container move. The former French colony has capitalised on its infrastructure and privileged location on the strait of Bab-el-Mandeb, with nearly 1m TEU passing through its ports each year.

But the competition has intensified, with DP World now in Somaliland and going head to head with Djibouti.

“Ethiopia destined cargo does predominantly move through Djibouti port, however, there are future alternatives within the area,” said Carl Lorenz, managing director for eastern Africa at container shipping group Maersk. Those options include Berbera and the much-delayed new port in the Kenyan town of Lamu, close to Somalia, which partly opened in May.

Sultan Ahmed bin Sulayem, DP World’s chair, said Berbera would be a viable and efficient option for trade in the region, especially for Ethiopian transit cargo. “We believe that developing the Berbera corridor into one of the major trade and logistics corridors will unlock huge economic benefits for Ethiopia,” he said.

Those ambitions have not been welcomed by neighbours, according to Berbera’s mayor, Hassan. “Djibouti is 100 per cent not happy with the investment DP World made in our port,” he said.

Three years ago, Djibouti seized the container port of Doraleh from DP World. Djibouti argues the company’s goal was to take control of the country’s coastline and that the port was not operated to its full potential. DP World counters Djibouti acted illegally and won several international arbitration cases.

Djiboutian officials have played down any rivalry. Ilyas Moussa Dawaleh, Djibouti’s finance minister, said Berbera would compete “in a way”. Another senior Djiboutian official said their country was in “pole position” as it was closer to the Suez Canal, adding that Djibouti was already a linchpin of global commerce. A general view of Doraleh Multi-Purpose Port in Djibouti.

Although a road corridor from Berbera to Wajaale, on the Somaliland-Ethiopia border, is due to be completed by 2022, Somaliland requires infrastructure development for which it could not directly receive multilateral financing because it is not an internationally recognised country. And unlike Djibouti, where China has invested heavily, it has relations with Taiwan.

But much depends on the political situation in Ethiopia, the regional giant that is the main customer for the competing ports. Over the past decade, Ethiopia went through an Asian-style economic miracle, growing at a whopping average of 9.4 per cent a year. Then the pandemic struck and an unending civil war started.

Said Hassan Abdullahi, general manager of Somaliland Ports Authority, said Addis Ababa had already missed the deadline for acquiring a stake in the port of Berbera and worries about the war continuing. In July, fighting spread from Tigray to the region of Afar, a transit point between Ethiopia and Djibouti.

“If the war goes on there will be no trade,” he said. “We are building all this infrastructure for Ethiopia. It could be a problem for Somaliland and for Djibouti.”

By Andres Schipani in Berbera