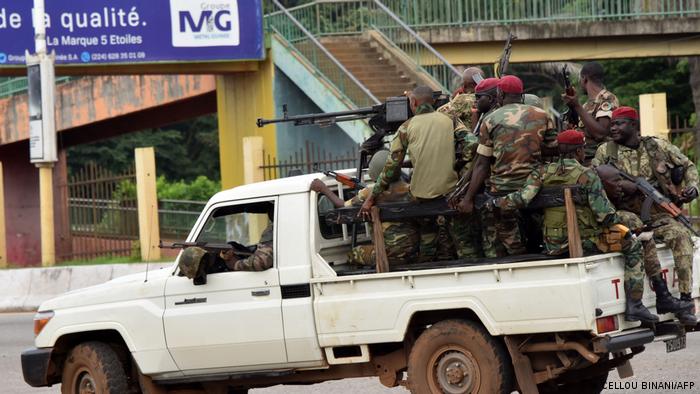 A source told DW that the president has been detained by special forces in a coup attempt, which the government denies. The military sealed off parts of the capital Conakry in response to the gunfire.

Gunfire rang out near the presidential palace in the Guinean capital of Conakry amid reports of an army coup on Sunday, witnesses told Reuters and several other news agencies. At least two people were injured from the violence.

What do we know so far?

The shots were fired in the Kaloum peninsula area of the capital, which is home not only to the presidential palace, but other government institutions and ministries.

A source in the presidential palace told DW that the president was detained by special forces. Yet, the source added that the soldiers staging the coup are only a small group, with the rest of the army staying loyal to President Alpha Conde.

Troops were deployed to the streets in response to the incident, with the military blocking access from the mainland to Kaloum. Guinean President Conde was reportedly unharmed by the gunfire, but his exact whereabouts are still unclear.

Local residents say they have been asked by soldiers to stay in their homes, according to news agency AFP.

What does the government say?

Guinea’s defense ministry claimed in a statement that the presidential guard and security forces “had contained the threat and repelled the group of assailants.”

“Security and sweeping operations are continuing to restore order and peace,” the statement said.

On the other hand, videos circulating on social media appear to show the president having been detained by the army in an apparent coup attempt.

What do the putschists say?

While the situation remains unclear, a group of soldiers claims the president has been arrested and the Guinean government has been dissolved.

A Guinean army colonel draped in a national flag said in a broadcast on state television that the country’s borders have been closed and that a transitional government will soon be formed.

“The personalization of political life is over. We will no longer entrust politics to one man. We will entrust it to the people,” Colonel Mamadi Doumboya said in the broadcast.

“It looks like the coup has actually succeeded,” DW West Africa correspondent Fred Muvunyi said from Lagos, Nigeria.  “We just had our colleagues in Conakry telling us that the army that staged the coup have already been on TV and national radio confirming that they have arrested Alpha Conde.”

“It’s still confusing to know who is going to take over,” Muvunyi added, citing the country’s internal divisions. Muvunyi reported that some people in Conakry are celebrating in the streets due to Conde’s possible ouster.

What is Alpha Conde’s legacy?

Conde assumed office in 2010 after the country’s first-ever democratic elections. He survived an assassination attempt in 2011.

The 83-year-old won a third term last year in the 2020 presidential election. His win came after he rammed through constitutional changes allowing him to sidestep the country’s limit of two presidential terms.

The Guinean president has pledged to stamp out the country’s rampant corruption, but critics say he has failed to improve life for the average citizen.

Although Guinea is rich in natural resources, including diamonds and gold, much of the country’s population lives in poverty. Guinea declared independence from France in 1958 and witnessed a period of military dictatorship from 1984 to 2008.