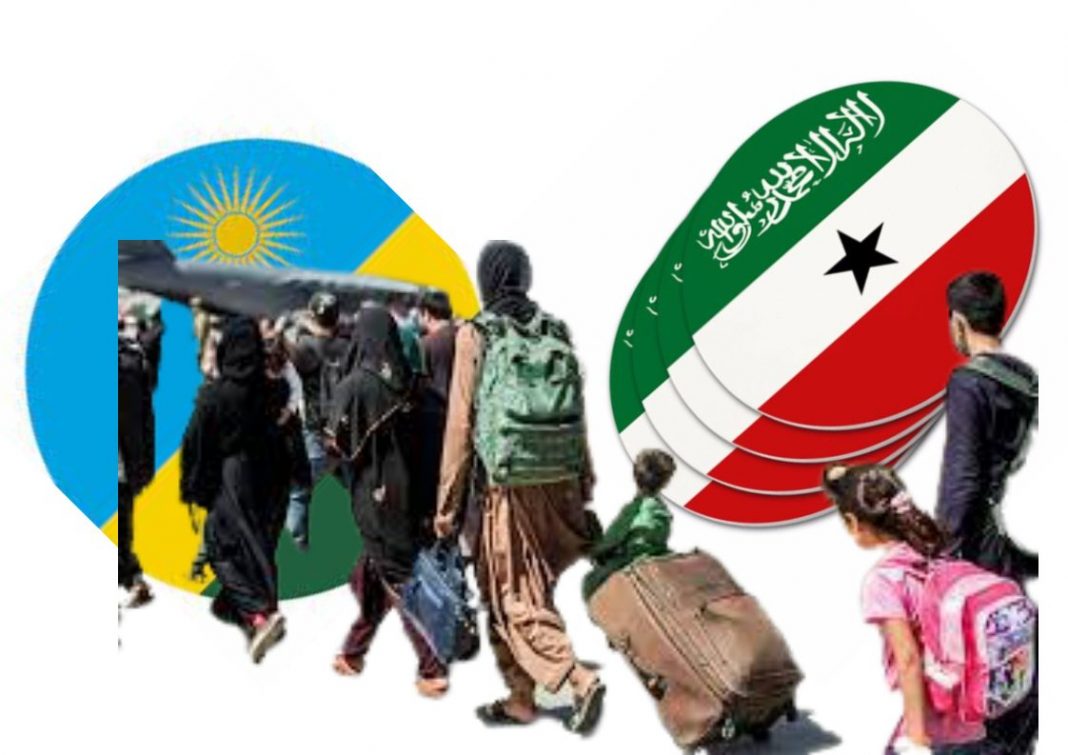 Somaliland, a former British colony that joined Italian-administered Somalia as an independent state in 1960, also has endured horrors of war. Even before Somalia’s disintegration in the 1990s, Somalilanders suffered through what some call the “Hargeisa Holocaust,” when about 90 percent of their capital city was destroyed and an estimated 200,000 people were killed between 1987 and 1989. Somaliland, which declared its independence in 1991, presumably sees a parallel between its own hardships and Afghanistan’s.

In the final days of the U.S. withdrawal from Afghanistan, a handful of African governments raised their hands to host Afghan refugees. Rwanda, Uganda, Sudan, and the self-declared independent state of Somaliland offered to welcome anywhere from a few hundred to several thousand refugees into their country. These African governments—in stark contrast to some European countries that quickly shut their doors to displaced Afghans—see a moral imperative to respond. They also spy an opportunity to extract geopolitical concessions from the international community.

The offer of assistance from African nations should be welcomed, appreciated, and understood from humanitarian and geopolitical perspectives. In 2020, only 22,770 refugees were resettled globally, a record low. Even before the fall of Afghanistan to the Taliban, an estimated 1.44 million forcibly displaced persons were in need of urgent assistance at the start of 2021. Hundreds of thousands of Afghans – or more – will likely be forced to leave home in the months to come at a time when barriers to their movements are at an all-time high. For many, escaping the Taliban is a question of life or death. Long-term solutions for Afghan refugees unable or unwilling to return home for the foreseeable future will be needed; but whether achieved in Karachi or Kigali, safety and security are their primary short-term concerns.

Sub-Saharan African countries already host more than 26 percent of the world’s refugee population. Most of the refugees come from neighboring countries, and some have lived in camps and foreign countries for decades. There are still Burundians living in Tanzania who fled their country’s civil war in the 1990s, and multiple generations of Somalis who reside in Kenyan refugee camps such as Dadaab. And it is not always displaced Africans: war-torn Somalia is home to 6,800 Yemenis and over 700 Syrians. The reasons why many African countries continue to bear the costs of hosting so many refugees are complex, often borne out of a sense of moral responsibility, the echoes of historical national traumas, and the allure of geopolitical opportunism. In the case of the Afghan refugees, all three factors are at play.

Rwanda and Uganda, who have accepted 250 and 2,000 refugees, respectively, have similar motivations to accede to U.S. requests to host the refugees. Uganda’s Foreign Ministry cited its “long history and tradition” of offering sanctuary to displaced persons. In The Conversation, researcher Evan Easton-Calabria notes that Uganda started hosting Polish refugees from Nazi-occupied Europe in the 1940s and subsequently has welcomed Burundians, Congolese, Ethiopians, Eritreans, Rwandans, South Sudanese, and Sudanese. Known for its pioneering efforts to give access to education, land ownership, and other rights to refugees, Uganda hosts almost 1.5 million refugees, the fourth largest refugee population in the world and the largest in Africa. Rwanda has hosted refugees for two decades, and many of its leaders, including President Paul Kagame, grew up in camps in neighboring countries. While Uganda’s refugee intake is larger, Rwanda’s traumatic history—including an ethnic pogrom in 1959, a civil war in the 1990s, and the genocide in 1994—is undoubtedly a reason why it has opened its doors to the globally downtrodden.

These principled drivers, however, only partly explain Ugandan and Rwandan enthusiasm for opening their doors to the Afghans. Uganda receives more foreign assistance than its neighbors in large part because of its approach to hosting forcibly displaced people, funds that have benefited refugees and host communities alike in a country with regular economic challenges. Both countries face growing international criticism for their antidemocratic rule and human rights records, and probably view their acceptance of Afghan refugees as an opportunity to soften their international images and dissuade foreign partners from imposing sanctions or other punitive measures.

Ugandan President Yoweri Museveni, who has been in power since 1986, presided over a 2020 election so discredited that the United States refrained from even deploying an observation team. President Biden’s National Security Adviser Jake Sullivan has tweeted about Uganda’s poor human rights record and the State Department imposed visa sanctions this year. Museveni, as he has with his peacekeeping and counterterrorism contributions, almost certainly hopes that hosting Afghan refugees might spare him from further negative geopolitical repercussions. While Rwanda’s Kagame is less exposed than his former comrade-in-arms Museveni, he has been under international scrutiny for his arrest of Hotel Rwanda hero Paul Rusesabagina and a recent exposé about the murder of a former Rwandan intelligence chief in South Africa. In the past, he has threatened to evict refugees if the international community criticizes his country’s activities, demonstrating his willingness to use perceived generosity as a geopolitical tool. Kagame may expect his offer to shelter Afghan schoolgirls, as well faculty and staff of the country’s only boarding school for girls, the School of Leadership Afghanistan (SOLA), as insurance ahead of more international condemnation.

Somaliland and Sudan have a different calculus than Rwanda and Uganda, seeking U.S. affirmation rather than acquiescence. Somaliland, a former British colony that joined Italian-administered Somalia as an independent state in 1960, also has endured horrors of war. Even before Somalia’s disintegration in the 1990s, Somalilanders suffered through what some call the “Hargeisa Holocaust,” when about 90 percent of their capital city was destroyed and an estimated 200,000 people were killed between 1987 and 1989. Somaliland, which declared its independence in 1991, presumably sees a parallel between its own hardships and Afghanistan’s. A Somaliland foreign ministry spokesperson last month confirmed that his government had discussed temporarily hosting Afghan refugees with U.S. officials. Sudan also has experienced the devastation of conflict and hardships of Islamic fundamentalist rule. It fought a decades-long civil war and the previous regime once sheltered Osama Bin Laden and carried out a genocide in Darfur. Sudan hosts the world’s sixth-largest contingent of refugees: around one million people from Central African Republic, Chad, Eritrea, Ethiopia, and South Sudan, as well as Syria. Though details are scarce, the Sudanese government did express a willingness to host “a limited group of Afghans… for a known period.”

Beyond humanitarianism, Somaliland and Sudan have additional motivations to accept Afghan refugees. Somaliland, which is not recognized by a single government, wants to show it is a responsible actor globally. Its Foreign Minister acknowledged that hosting refugees “shows that Somaliland is a credible state that has a stake in international affairs.” The Somaliland government seemingly wants to use its hosting of refugees to continue to build its case—alongside its record of stability and free and fair elections—for international recognition. Sudan, in contrast, wants to rehabilitate its reputation as an international pariah state and cement U.S. support for its democratic transition. Following the overthrow of dictator Omar al-Bashir in April 2018, the new government—a mix of military and civilian leaders—has assiduously worked to win U.S. backing, even hosting USAID administrator Samantha Power in one of her first overseas visits. It normalized relations with Israel, banned female genital mutilation, cancelled the death penalty as apostasy, and agreed to settle claims by victims of the attacks on the U.S. Embassies in Kenya and Tanzania and the USS Cole off the coast of Yemen. Several of these steps were required by the United States to lift the State Sponsor of Terrorism designation and restore the country’s access to international lending institutions. While there is no immediate ask by Khartoum in return for welcoming the Afghan refugees, it is almost certainly another measure to keep it in Washington’s good graces.

The U.S. government should praise and warmly receive these countries’ offers to host Afghan refugees. The need, of course, is great. Over 123,000 people were evacuated from Afghanistan in the weeks before U.S. withdrawal on September 1; though exact figures are unavailable, it is safe to say at least half of those evacuated were Afghan citizens currently awaiting processing and added to an already huge number of people globally in need of resettlement. It is part of this long line that the Afghans in Africa find themselves. Though out of immediate danger from the Taliban, their future remains unclear. African leaders speak of temporarily hosting Afghans while asylum claims are processed in the United States and elsewhere beyond the continent. Given the thorough background check and vetting procedures before admittance into the United States, though, the “temporary” hosting provided by Uganda, Rwanda, Sudan, and Somaliland could last for months, if not years.

As the United States continues to urge these and other African countries to host Afghans, it should provide necessary assistance to the refugees and their host communities as long as required, especially if there are distinct cultural, religious, or other accommodations necessary to provide protection and support to these recently-displaced and vulnerable Afghans. U.S. diplomats should also be prepared to manage inevitable geopolitical requests. Despite the generosity of African nations, these requests should be carefully adjudicated, avoiding all appearance of quid pro quo for accepting refugees and providing humanitarian assistance. U.S. focus should be on providing assistance to refugees and their host communities while working expeditiously to permanently resettle Afghans to third countries. While difficult, it is not impossible to resolve tough trade-offs between refugee assistance needs and broader human rights and democracy objectives in the region.

Rwanda, Uganda, Somaliland, and Sudan have a history of generosity toward displaced persons and refugees and should be appreciated for their willingness to host vulnerable Afghans, no matter the reason. It is important – and possible – for policy makers to support these good deeds without compromising or adjusting other priorities.