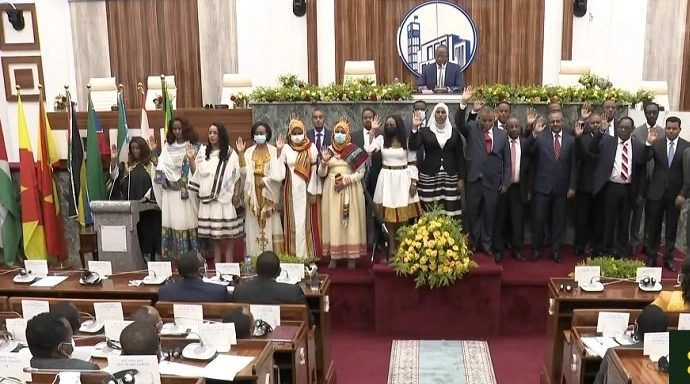 What makes his new cabinet somewhat new, at least theoretically, is that three of the cabinet ministers are appointed from three different opposition parties.

It is a new tradition in the modern history of Ethiopia, and remains to be seen if it will impact governance positively or otherwise.

About one-third of the cabinet members are women. Abiy Ahmed made headlines a few years ago for making a gender parity parliament that was said to be the first in the history of the continent.

The leader of Ethiopian Citizens For Social Justice Party (EZEMA), Dr. Beranu Nega, is appointed as Minister of Education.From reports disclosed by the party, there was a discussion within his party whether to accept PM Abiy Ahmed’s offer or not. Majority of the party members have supported the idea of working with the government. On Wednesday, the party released a brief statement on social media expressing best wishes for Dr. Berhanu in his new role. As a former professor of economics at Bucknell University in the United States, Dr. Berhanu is presumed to have the competence to bring about much-needed change in the Ministry that was butchered by ethnic politics. The quality of education, for many Ethiopians, is at a disaster level.

Kejela Merdassa, another politician from the opposition quarter, is included in the new cabinet. He is appointed as Minister for culture and sports. He was an executive committee member of the radical ethnic Oromo nationalist party, Oromo Liberation Front (OLF). Following a brief suspension of the party’s chairman, Dawud Ibsa, the crack within the ranks of OLF came to the open,and then the split became official. It was over disagreement in entirely abandoning armed struggle and resorting to peaceful one.  Kejela Merdassa’s group aspired to take part in the sixth general election, but it failed to catch up with the Electoral Board deadlines for registration. His comrade Ararso Bikila is appointed in the Oromo regional government.

Belete Molla, the leader of National Movement of Amhara (NaMA), is appointed as Minister for Innovation and Technology. Despite being one of the youngest political parties in the country, NaMA, as a party formed against the backdrop of the pervasive massacre of ethnic Amhara has a significant political currency in the country, especially in Amhara region of Ethiopia. The Ministry is presumed to be one that is not politically lucrative from a domestic politics point of view. However, Ato Belete, whose academic background is in philosophy, could get the opportunity to attend cabinet meetings to seize any possible opportunities to advocate against what seems to be an orchestrated massacre of ethnic Amhara in different parts of the country, especially in Oromo and Benishangul Gumuz regions of Ethiopia.

Another key appointment in Abiy Ahmed’s cabinet is Dr. Abraham Belay. He is bringing his ministerial experience from the Ministry of Innovation and Technology , and managerial experience as he was CEO of Ethiopian Electric Power (EEP). In his last role, he served as head of the interim administration in the Tigray region of Ethiopia.  Before he joined Prime Minister Abiy’s Prosperity Party, he was an executive committee member of the Tigray People’s Liberation Front (TPLF). He has demonstrated competence from his role as CEO of EEP and Innovation Minister. However, his new role as Minister for Defense rather sounds vague.

The other major change within Abiy Ahmed’s cabinet is that Muferiat Kamil is moved from the Ministry of Peace to take a new role in a new Ministry, Works and Skills Ministry.

Benalf Andualem, senior Prosperity Party official, is appointed as Minister for Peace. Many other ministers from the previous cabinets retained their ministerial portfolios.  The Ministry of Trade seems to be rebranded as Trade and Regional Integration Ministry.

The lists of ministers confirmed in the new cabinet are as follows :