SomTribune
Home Sports How Chelsea, Liverpool and Man City are Faring in the PL Title... 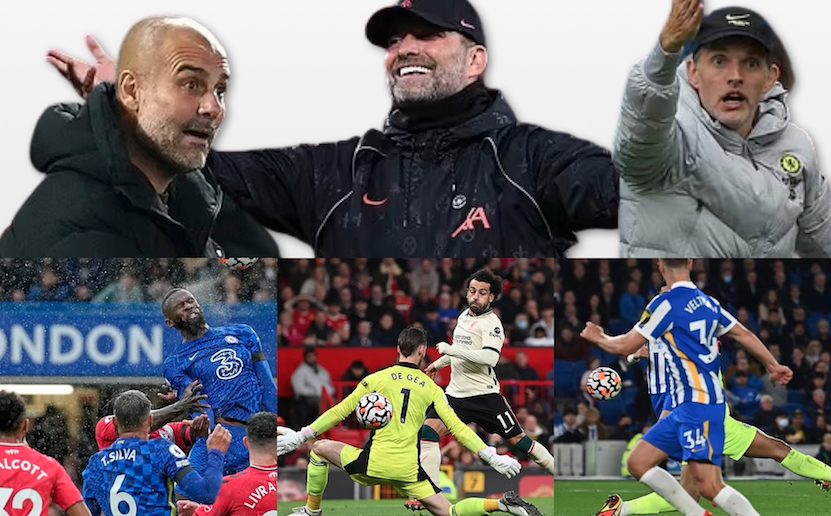 And then there were three. If there was any talk of Manchester United being true title contenders, those believing so were silenced on Sunday evening after they thumped 5-0 at home by Liverpool.

The Reds, led by a Mohamed Salah hat-trick, ran riot at Old Trafford as they dismantled their bitter rivals on their own patch. This result wasn’t the only eye-catching scoreline of the weekend though as Chelsea thrashed Norwich City 7-0 and defending Premier League champions Manchester City were sublime in a 4-1 win at Brighton. The trio’s combined triumphs totalled for an aggregate score of 16-1.

Speaking post-match on Sunday, Liverpool legend Jamie Carragher said his former side, Chelsea and City are three of the four best teams in the world alongside Bayern Munich at present.

As we approach a quarter of the season, the title race looks like being a three-horse race between Chelsea, Liverpool and Manchester City. As a result, Sportsmail assesses their strength and weaknesses.

Let’s start with the table-toppers and the current European champions.

The Blues sit on 22 points after nine matches, one ahead of second-placed Liverpool and two ahead of third-placed City.

They’ve only lost one game so far – a 1-0 home defeat by Manchester City on September 25 – and have also drawn one – a 1-1 draw at Liverpool on August 28 – from their nine matches this season.

This statistic shows their resoluteness – the same characteristic that can be applied to their title rivals.

However, where Chelsea can be deemed to be even more impressive is their tough start to the season. Out of the three title contenders they’ve navigated the hardest route so far – having played at Arsenal (2-0 win), Liverpool (1-1 draw), Tottenham (3-0 win) as well as facing City (1-0 loss) in four of their opening six matches.

The fact that they’ve only conceded three goals across their nine matches, including that start, emphasies their brilliant defensive nous under Thomas Tuchel. Breaking it down further, only one of those goals has come from open play with the other two from the penalty spot – meaning they really are a tough opposition to break down.

They have the best defence in the Premier League with a unit that is filled with world-class players. A year ago, Antonio Rudiger’s time at Chelsea was seemingly coming to an end under Frank Lampard but he has been reinvigorated by his managerial successor Thomas Tuchel. His form has reached new heights that Europe’s elite are waiting to see how his contract talks unfold at Stamford Bridge.

Alongside the German, Thiago Silva continues to defy his age as the 37-year-old shines alongside him. Then you have the likes of Cesar Azpilicueta, Reece James, Ben Chilwell, Marcos Alonso and Trevoh Chalobah all performing to a high level. And if you somehow get behind that defence then you have the towering figure of Edouard Mendy to try and beat in goal.

If there is one cause for concern, it could be their attacking output. This sounds ridiculous considering they just thumped Norwich City 7-0 on Saturday, but Romelu Lukaku’s ankle injury is a major concern.

Tuchel is remaining vague on how long the striker will be out for and before being hurt the Blues had created little for the Belgian in his previous four or five matches. In fact, when he returns the 28-year-old will be on a seven-game goal drought for the west London outfit.

To make matters worse, their deputy striker Timo Werner has a hamstring injury – leaving Kai Havertz as the only recognisable forward and he is not a true centre-forward.

It’s weird to think, but Liverpool have gone under the radar. Despite their world-class quality throughout the squad not a lot of noise has been made about Jurgen Klopp’s side this season, until now.

After winning the Champions League (2018-19) and then the Premier League (2019-20), last term was just an anomaly for the Reds. In unprecedented times they had no centre backs yet still finished third in the table.

Now with Virgil van Dijk, Joel Matip, Joe Gomez back – plus the summer addition of Ibrahima Konate – the Anfield outfit are back to full strength and ready to reassert their dominance in England and Europe.

Sunday’s mauling of Manchester United was a devastating example of their breathless football. Some eyebrows were raised by the team selection, but it just highlighted the strength of their squad as they were 4-0 up at Old Trafford by half-time. In truth, the full-time margin of 5-0 should have been greater – such was the dominance of the visitors.

It will come as no surprise that Liverpool have scored the most goals in the Premier League so far with 27 goals – meaning they average three goals-per-game. This is four more than Chelsea (23) and seven more than City (20).

At the heart of this has been Salah. The forward has been sensational all season – scoring a staggering 10 goals in just nine league matches so far. Some of his strikes have been mesmerising (see his solo efforts against Manchester City and Watford), leading many to believe he is the best player in the world on current form. On top of this too he has five assists as well, showing it is not all about him.

Momentum is building on Merseyside and the fact they remain the only unbeaten side (winning six and drawing three) in the Premier League is a warning to their title rivals. They just never know when they’re beaten.

If there are any drawbacks it’ll depend on the availability of Klopp’s squad. ‘Egyptian King’ Salah will miss part of the season for the Africa Cup of Nations (which runs from January 9 to February 6) as will Sadio Mane and Naby Keita. While that is a few months away, that will be in the back of Klopp’s head.

At the forefront too will be the rising injury count among his squad. Keita was forced off on Sunday following a reckless challenge from Paul Pogba – that saw the United midfielder sent off. This leaves the Reds short in midfield considering that James Milner, Thiago Alcantara and Harvey Elliott are all currently on the sidelines.

Last but not least, let’s talk about the current champions.

They’re only two points behind Chelsea on the account of having drawn a game more (one being a surprising 0-0 home draw with Southampton), so Pep Guardiola knows his side are in a good position in third.

City are known for their swashbuckling possession-based style of play under Guardiola but defensively they have been rock solid too. They have conceded just four goals across nine matches so far this season, second to only Chelsea’s three.

They were on course to share this record with Chelsea on Saturday evening until Alexis Mac Allister pulled one back for Brighton from the penalty spot in the 81st minute of City’s 4-1 win on the south coast.

Strength in depth has never been an issue for City and that has been demonstrated by the way Guardiola has utilised his squad. He has world-class talent in an abundance of positions and changing personnel doesn’t diminish their starting XI’s quality. This was evident on Saturday with influential trio Kevin De Bruyne, Fernandinho and Riyad Mahrez all coming off the bench against Brighton.

Since losing 1-0 at Tottenham in their season opener, City have gone from strength-to-strength domestically – winning six and drawing two top-flight fixtures. This has included an emphatic 5-0 win over Arsenal, plus a 1-0 win at Leicester City.

However, most impressively City have travelled to Chelsea and Liverpool this season and not tasted defeat – winning 1-0 at the former and drawing 2-2 at the latter earlier this month. Come the second half of the season, City will have home advantage – which could prove pivotal in deciding this season’s champions.

The one glaring problem with City though this season is the lack of a bonafide striker. Their all-time record goalscorer Sergio Aguero left in the summer and the club failed to bring in a replacement.

Tottenham’s talisman Harry Kane was the one player they wanted but failed to get and the lack of a natural centre-forward has showed at times. Phil Foden was excellent as a ‘false 9’ on Saturday, scoring twice, but the England playmaker wants to play deeper ideally. Gabriel Jesus was thought of as Aguero’s heir but he now prefers to play wider too.

City scored four at the weekend to take their tally to 20 league goals this season, but if they are to truly make the most of their multiple chances created per match then they need a world-class finisher like Chelsea have in Lukaku and Liverpool have in Salah. Expect the blue half of Manchester to be on the lookout during the January transfer window.

By LUKE AUGUSTUS FOR MAILONLINE