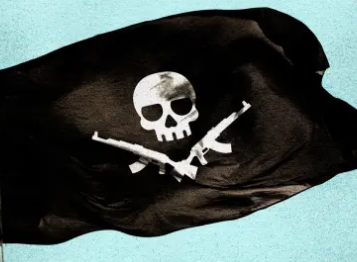 An expert explains why we rarely hear about criminal exploits on the high seas.

One November morning, the MV Cheung Son, a cargo ship travelling from Shanghai to Malaysia’s Port Klang, was assailed by a gang of hijackers. The ship’s 23 crew members were caught unaware, and within minutes had lost control of the vessel and been locked in the ship’s hold.

Having searched the MV Cheung Son for valuables, the hijackers ordered the sailors out onto the deck. A report published in The Guardian in August of 2000 suggests that “their bodies were weighted, bound and gagged, and dumped overboard”. Neither the ship nor its cargo were found, and the same newspaper report claims that “the suspicion is that it has been given a new identity, with the collusion of corrupt officials”.

This is a piracy story that doesn’t involve buccaneers, eye patches or wooden legs. The hijacking – or ship–jacking, if you prefer – took place in 1998 and is one of the first recorded incidents of modern piracy in the South China Sea. It was a contemporary version of a crime that mankind has been committing since at least the days when the Greeks ruled the waves.

Popular culture’s vision of what a pirate looks like (Jack Sparrow, pretty much) and what a pirate does (sailing the seven seas while gargling rum and bellowing “AHOY THERE” at regular intervals) and all that comes with it (the skull and crossbones, the buried treasure) bares no resemblance to contemporary reality whatsoever.

Piracy isn’t the stuff of fiction, and it certainly isn’t a thing of the past. A study published by the ICC International Maritime Bureau in early 2021 found that 195 incidents of the crime were reported to the IMB Piracy Reporting Centre. The majority of these took place in the Gulf of Guinea, the current global capital of modern international piracy.

“In reality, piracy never disappeared, but it just doesn’t affect the West anymore, and that’s why it goes unnoticed,” says maritime terrorism expert Peter Lehr, author of Pirates: A New History, from Vikings to Somali Raiders. “During most of the 20th century, the West was preoccupied with other issues that were deemed more important, like world wars, the Cold War and the possibility of all-out nuclear war between the USSR and the USA. Compared to those fears, piracy was a minor issue – an inconvenience more than anything.”

That doesn’t mean that piracy will disappear, however. Given that global supply chains are still largely reliant on cargo ships, maritime traffic is going nowhere. Neither is piracy. “Even if we get to the stage in the future where we’ve got robot ships without any crew members onboard, pirates will learn how to hack them,” says Lehr.

In Lehr’s eyes, deterring the existing human pirates involves fighting fire with fire. “You need a lot of warships in order to patrol vast stretches of coastal water, and nowadays you also need a lot of helicopters and maritime patrol aircraft.”

Before going to that effort and expense, the piracy expert thinks it would be sensible to “establish welfare policies on land adapted to fishermen in order to give them life options away from piracy”. Many of today’s pirates are ex-sailors who worked in overexploited waters. “Put yourself in the shoes of a young fisherman in the South China Sea or off the coast of Somalia,” Lehr says. “You’d soon see how industrial trawlers from different countries deplete your fish levels, leaving you with nothing.”

Lehr adds that “the state doesn’t help, because it can’t, and because it doesn’t want to. They leave you feeling alone and you have to find a way to put food on the table for your family. What can you do? That is when piracy becomes an option. It starts out primarily as an opportunistic activity, and then, as income increases, it becomes a more organised activity.”

In the end, Lehr argues, piracy exists in places where there’s a lack of law and order, and where the borders between states are vague. Location is also a key factor, as the crime is more likely to happen “in places where looting can be a very lucrative activity, as is the case with maritime traffic that’s open to attack in straits or confined waters as opposed to the high seas”.

Arguably the best known pirates of the modern day are those from Somalia. It is an industry that exploded in the country following the collapse of Said Barre’s presidency after a period of civil war at the beginning of the 1990s. Law and order on the sea disappeared and coastal waters rich in highly valuable fish like bluefin tuna became the target of industrial trawlers around the world, ousting Somali fishermen from their fishing grounds.

Targeted attacks on foreign ships began in earnest in the mid–2000s, when pirates started regularly hijacking vessels and demanding large sums of money for their return. A passenger-less French super yacht, Le Ponant, was hijacked with 30 crew members onboard in 2008, an event that is considered the beginning of the second wave of Somali piracy. News that the ship had been released after the owners paid a €1.7 million ransom “spread like wildfire through Somalia”, as Lehr puts it. “That is why Somali piracy exploded. It was about greed.”

The pirates started using trawlers or small freighters they’d captured as motherships. These were then used to launch attacks against container ships, oil tankers and anyone who crossed their path.

Following the capture of Le Ponant, the European Union, NATO and countries including China, South Korea and Thailand recognised that the Somali threat to maritime communication and the global supply chain required urgent action. To this day, warships from various nations carry out constant patrols in the area. However, experts like Lehr believe the strategy will only be useful for so long. “At the end of the day,” he says, “it’s expensive to keep people stationed in such distant waters.”

Not all pirates work like the Somalis do. Nigerian pirates, for example, are interested in cargo, specifically in the extraction of crude oil. Their political circumstances are different and, therefore, so are their needs. In the Caribbean, another hot spot for piracy, it is often linked to drug trafficking, but in the Bay of Bengal, a poorly defined border area between India and Bangladesh, the victims are usually local ships, not international shipments.

The reality of contemporary piracy occasionally rears its head in the Western media, but tends to go unremarked upon. Lehr thinks xthis is because, largely, it does not directly affect the West. “If we were talking about the hijacking of a Western container ship, supertanker or cruise ship, it would certainly attract media attention. But if the attacked ship is a local ship, the attack may or may not be reported in the local news, but for the international media, it is not newsworthy. Once again, who cares?”

In fact, most pirate attacks in the Straits of Malacca or the South China Sea are never reported anywhere, as long as there are no deaths. “Things change if there is a crew that has been kidnapped, as in the case of the French luxury yacht. If not, it’s easily forgotten,” Lehr points out.