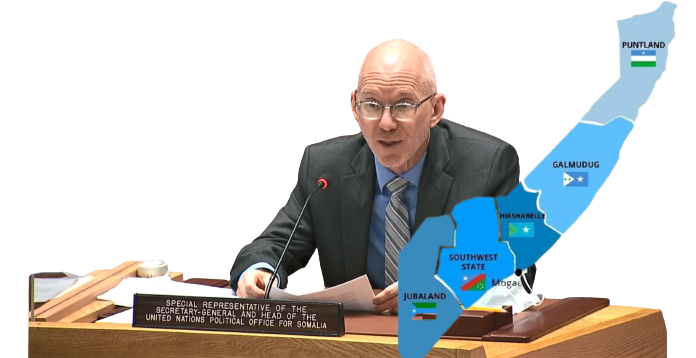 James Swan, the Special Representative of the Secretary-General of the United Nations in ‘Somalia, addressing the Security Council, Wednesday, showed despair of an improved security situation in Somalia despite the international community’s unreserved – and long-standing – financial and moral support to the beleaguered East African country.

“The security situation in Somalia, unfortunately, continues to be volatile,” he said, adding that this was so despite ‘the commitment and sacrifice of Somali Security Forces and AMISOM forces that continue to face Al Shabaab on a daily basis’.

Mr Swan lamented that Al Shabaab was not only alive and looming over the whole country but that it was able to maintain big operations at will.

“Al Shabaab remains a serious threat to Somalia’s security, able to maintain a high level of activities, including through continued use of improvised explosive devices, and an increase in the use of suicide bombers,” he stated.

The SRSG added that of ‘documented 964 civilians killed or injured in armed conflicts’, two-thirds were linked to Al Shabaab instigated operations.

‘So far in 2021, UNSOM has documented 964 civilians killed or injured as a result of armed conflict. Al-Shabaab remains the largest perpetrator, responsible for almost two thirds of civilian casualties,” he said.

Highlighting how serious the security situation has even further deteriorated in recent months, Mr Swan pointed out that political tensions and fresh rivalries exacerbated the grim picture.

“Regrettably, political tensions also continue to drive conflict in Somalia. The period from 23 to 26 October saw intense fighting in the town of Guriel between Ahlu Sunna Wal Jama and Galmudug security forces supported by federal armed forces. This armed confrontation resulted in significant casualties, mass displacement of the civilian population, and severe damage to public facilities and private homes. Along with partners, the United Nations engaged all parties on these issues, with strong calls for a cessation of hostilities and pursuit of dialogue to address political differences,” he pointed out.

Regarding the progressive AMISOM transfer of security responsibilities to Somalia, the SRSG stated that progress was already behind schedule. Mr Swan did not wish to elaborate on it at the moment – perhaps intimating the planned schedule may undergo further changes and delays in the foreseeable future.

“Implementation of the Somalia Transition Plan for progressive transfer of security responsibilities from AMISOM to the Somali Security Forces is advancing, but remains behind schedule. Regarding the implementation of resolution 2568 of March 2021 with respect to post2021 security arrangements, the Secretary-General will keep the Council informed of developments, and I therefore will not go into details of this matter,” he said.

The rest of the 7-page statement also painted a bleak picture of how Somalia’s indirect elections were progressing, the humanitarian situation, impact of climatic shocks, internal displacement, diseases and conflict in the country.