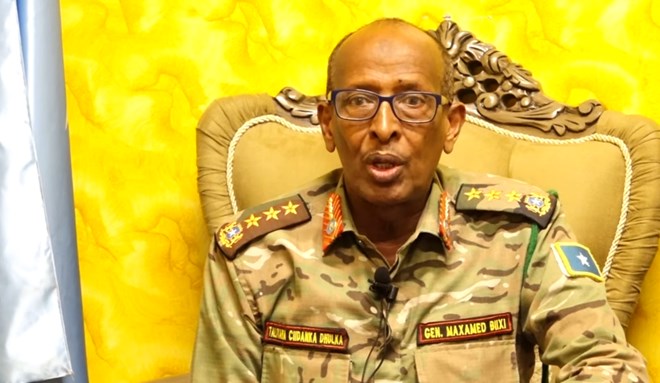 In an unprecedented verbal lash against the African Union’s peacekeeping troops in Somalia, an SNA General accuses AMISOM of using its role in the country’s security as a bargaining chip to promote its own agendas.

Brigadier-General Mohamed Bihi, Commander of the Somalia Armed Force’s infantry, accused the peacekeepers of using peacekeeping and their stay in the country to jockey for better benefits, longer stay.

“While we welcome the role African peacekeepers have played and still do in securing peace in the country, we will not, however, countenance African boys gathered from Africa bargain over our heads for own ends,” he said.

He said SNA troops were drawing a pittance compared to a USD 1,400 each AMISOM peacekeeper was taking home with all other cares covered by all sorts of allowances and benefits.

The General, on the same token, strongly blamed Somalia and Somalis – in general – for the situation and deterioration, as he put it, of their honor and integrity.

“None but us is to blame for this sorry development,” he said.

The General, particularly, pointed an accusing finger at politicians so engrossed with petty squabbles.

“The country is turned into a bargaining chip while we are so busy exchanging spars, going for each other’s jugular,” he said.

Talks between the weak Somalia government and an AU delegation on a reconfigured peacekeeping mission which would now include more troops from fresh countries and a stronger role of the UN failed earlier in the month.

The proposal discussed called for more countries to send troops into Somalia to join the 20,000 presently representing the AU member countries of Burundi, Djibouti, Ethiopia, Kenya, and Uganda.

Ambassador Mohamed Gad of Egypt who led the 15-member team of the African Union Peace and Security Council who arrived for the talks in Mogadishu on 9 November, said the Union was committed to Somalia peace despite differences with the Somalia government on technicalities.

AMISOM troops were first deployed in the conflict-ridden East African nation in 2007 to, primarily, drive out Al-Shabaab militants from major cities in order for the country to embark on rebuilding its governance, economy, and infrastructure.

The AMISOM mission runs under a United Nations mandate that runs out on December 31, 2021.