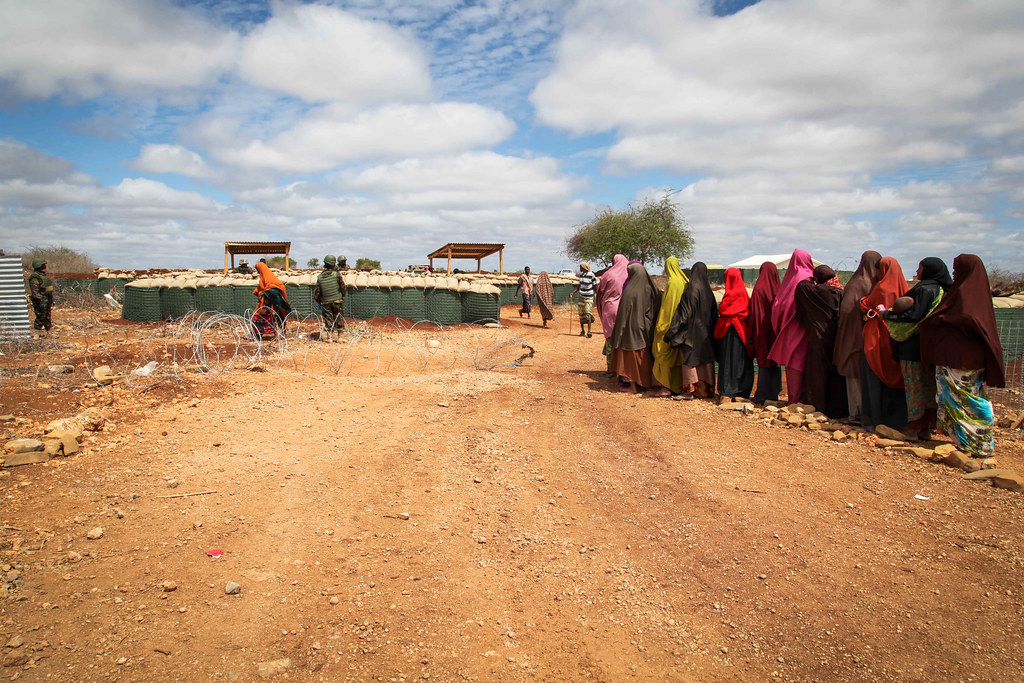 The two sides split when the moderate movement that used to dominate the Galmudug state, accused the federal government of violating their power-sharing agreement, after the federal government held a state presidential election without consulting them. Ahlu Sunnah boycotted the election and held a parallel state election, producing their own president. That led to a clash between the two sides that later forced the leadership of the movement into exile.

Fighting broke out on October 23, 2021, in Guriel following an offensive led by the federal and state armed units to recapture the town after the religious movement claimed it in the first week of October.

After one month of military buildup along the main road that connects the town to the State Capital Dhusamareb, the war broke out on October 23, killing over 100 people and injuring at least 400 others. As the war raged, medical services were disrupted and hospitals and other medical facilities were forced to discontinue their services due to heavy shelling nearby.

A situational report by the United Nations agency for humanitarian assistance (OCHA) stated that health facilities were damaged, power and water lines were cut, and 100,000 residents of nearby villages were displaced. The report also warned that the displaced were vulnerable since they lacked proper shelter and had to travel long distances to get water and firewood. Women and girls faced increased risk as they could be exposed to dangers like sexual assault and gender-based violence. In a separate report, the UN noted that more than 400 houses and 260 shops were damaged in the war and that schools had not yet opened.

The International Committee of the Red Cross (ICRC) Africa also documented the destruction of the health facilities in a statement, noting that because of the heavy shelling, wounded people on both sides of the struggle could not access much-needed medical treatment.

The town’s main hospital, Sterling, was partially damaged due to a mortar fire. This hampered citizens’ access to medical facilities and forced many to seek treatment elsewhere.

According to OCHA, local humanitarian partners recorded violations of international humanitarian law, including the denial of treatment to those injured. In one instance, Somali police officials in Galmudug state seized two patients from their hospital beds where they were receiving treatment. As per a local media report, the two individuals were fighters for the religious movement. Police seized them in one of the hospitals in Galkayo, Galmudug, when they were tipped off. In another report, state district commissioners issued a warning to hospital management not to admit any injured fighters. The ICRC decried the decision in a tweet, underlining the wounded people’s right to access healthcare irrespective of who they are.

The move led to many questioning the motive behind the denial of treatment. Among the various Somali Twitter users that commented on the incident was former state president of neighboring Hirshabelle state Mohamed Abdi Ware. In a tweet, he wrote:

The hostility prompted the US government to reconsider support for Somali military elite unit Danab (Lightning) following participation in a battle in central Somalia against a former ally in the fight against al-Shabab extremists and the killing of   Major Abdilatif feyfle, the commander of the US-trained elite unit in Galmudug state.

Speaking with VOA Somali services, an official with the US embassy in Mogadishu who declined to be named said:

The United States provides training and support coordination to Somali National Army Danab Brigade units to advance our shared objective of defeating al-Shabab. … As a result of this incident, we will be reviewing the support we provide to ensure it is being used appropriately and consistent with US policy and objectives.

The fighting might have subsided for now, but its impact is far-reaching. In a statement by Ahlu Sunah, the armed movement leadership accused African Union peacekeepers (AMISOM) of participating in the conflict. AMISOM countered the accusation with a statement denying any involvement. In the statement, they stated that the allegations are false, malicious that are meant to cause disaffection between AMISOM and the Somali communities.

There is now an atmosphere of tranquillity in the town, and people have started to return, with business and other essential services reopening; however, the fluidity of the situation means that any minute there is the possibility for another confrontation.

The state government is now in control of the town, and the armed movement retreated to a new base 35 kilometers away from the state capital, Dhusamareb, following mediation efforts led by elders and the business community. As reported by Somali Guardian, they are now regrouping and are readying for another showdown with the state government.

Somalia’s international partners issued a joint statement in October calling for dialogue and cessation of hostility. Reliable sources on the ground who requested anonymity confirmed to Global Voices that another conflict is likely imminent since the state government ruled out any talks with the armed movement — insisting that they surrender their weapons and disband Ahlu Sunnah.