SomTribune
Home Africa Ethiopia Is the U.S. Congressional Staffers Visit to Somaliland a Response to the... 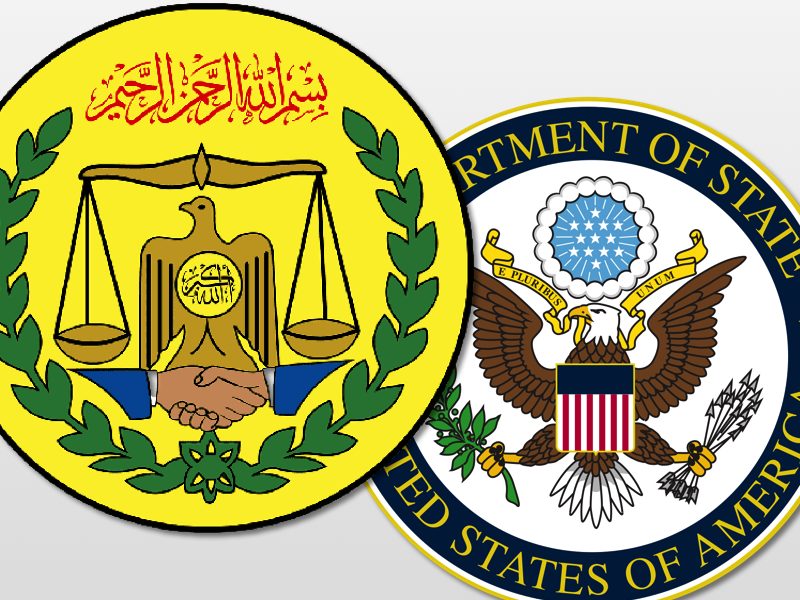 A United States Congressional Staff delegation is due to arrive in the Republic of Somaliland tomorrow, Monday, 13 December.

The expected arrival closely follows on the heels of a visit a high-level delegation led by Dr. Essa Kayd, the Somaliland Foreign Minister, made to the United States stopping at Washington and New York where he met with a number of high-powered statesmen and organizations.

The Ethiopian conflict which pits the federal government with the Tigray regional state forces and the tide and ebb of the devastating war has unearthed influences and interests far beyond regional cares spheres.

The fact that the West, led by the United States, has been found wanting and ineffectual in these influences has become only too clear. Pressures the United States and its friends exerted on Addis Ababa to stop atrocities the Ethiopian army meted on Tigrayan civilians and to allow international aid reaching victims both fell on deaf ears. Ethiopia, encouraged by more robust, more forthcoming friends, chiefly, China, Turkey, and the UAE, called the West’s bluff, revealing it as a paper tiger.

Bolstered by newly gained drones, weaponry, and financial support, Abiy Ahmed managed to turn the tables on the advancing TPLF – at least for the moment.

On the other hand, the Tigrayan liberation forces caught in a pincer-grip and so troubled by its suffering population looked and hoped but could not find their paper friends – the West – anywhere in sight.

China, particularly, has not only captured the hearts and loyalty of Ethiopia in its Belt and Road Initiative but it, as a motivated partner, succeeded to paint the West into a sorry corner.

China, using a number of tacks in its Initiative and speedily processed loans, appears to have firmly established itself in Africa through intelligently planned debt snared on hapless, development-starved, myopic African governments.

The West failed to capitalize on openings presented as China’s burdensome debts ominously surfaced in China take-overs of key revenue generators in those countries and that its inputs, especially in the construction of office blocs, have been revealed to embed spyware tapping into every facet of those nations’ politics and economies.

China waltzed from the East to the South, to the West of the continent where it has now a powerful command of the Atlantic undeterred.

Closer to home, China has one of the best-equipped spy and naval bases in Somaliland’s tiny neighbor to the northwest – Djibouti. To the south, it has long settled on a firm grip on Villa Somalia presenting itself to Mogadishu as a firm believer of a fictitious ‘Somalia territorial integrity.

China, fearful of the power of democracies defeating its One-China ambitions, found a gullible ally in a Somalia that claimed untenable jurisdiction over a Somaliland that went into an ill-advised union with it in 1960.

And this is so because Somaliland established firm relations with Taiwan.

The imminent arrival of a US delegation of this caliber, it is hoped, would be the harbinger of many more, proactive Western initiatives to come aiming to recapture wasted regional and continental face. In the case of Somaliland, Secretary of State Hillary Clinton reversed the American dual-track policy with Somaliland in the years between  2009 and 2013.

The United States, although it has been awakened to the waning influence it had on the continent and, especially in Eastern Africa, has not introduced any significant policies reversing its downward spiral.

Former State Department diplomats such as Jendayi Frazer, Tibor Nagy, and Peter Pham have all alerted the US to the differences between Somalia and Somaliland and how the United States’ continued policy ineptitude will irreversibly harm western interests in the whole region.

Ms Frazer, in office from 2005 to 2009, particularly, regretted not to have ‘pushed for Somaliland recognition while she was in office as U.S. Assistant Secretary of State for African Affairs.

Tibor Naby, former US Assistant Secretary of State for Africa, US Ambassador to Guinea and Ethiopia, accentuating the impending peril of a Somalia without the protection of AMISOM and other international peacekeepers due to make an exit next year, believes this Somaliland arch-rival is better off as a trusteeship.

AMISOM was created in 2007 to help the "internationally recognized govt" of Somalia vanquish al-Shabaab. Its mandate is due to expire this December. Does anyone believe that now, 14 years later, the inept Somali govt can stand on its own?! Outrageous!

The Congressional staffer delegation, representing several US Congress House Committees, would visit key government installations, meet with a cross-section of government and non-state actors’ offices, and would, eventually, draw up a policy report for the Congress and the State Department to act on.

This delegation is not only the highest and but the most timely, given the fluid, fast-changing political and economic kaleidoscope of the region, but – it is hoped – the most impactful on Somaliland future for these past 30-plus years the country has been fending for itself without international recognition or significant external support – and that of the United States and its Western allies in the region.

The United States is more in need of geo-strategically best placed Somaliland than the letter needs it – the more so now than ever.

The delegation’s report would – even in its most generous terms – would only corroborating a 2005 AU report that weak Somalia pushed under the mat. 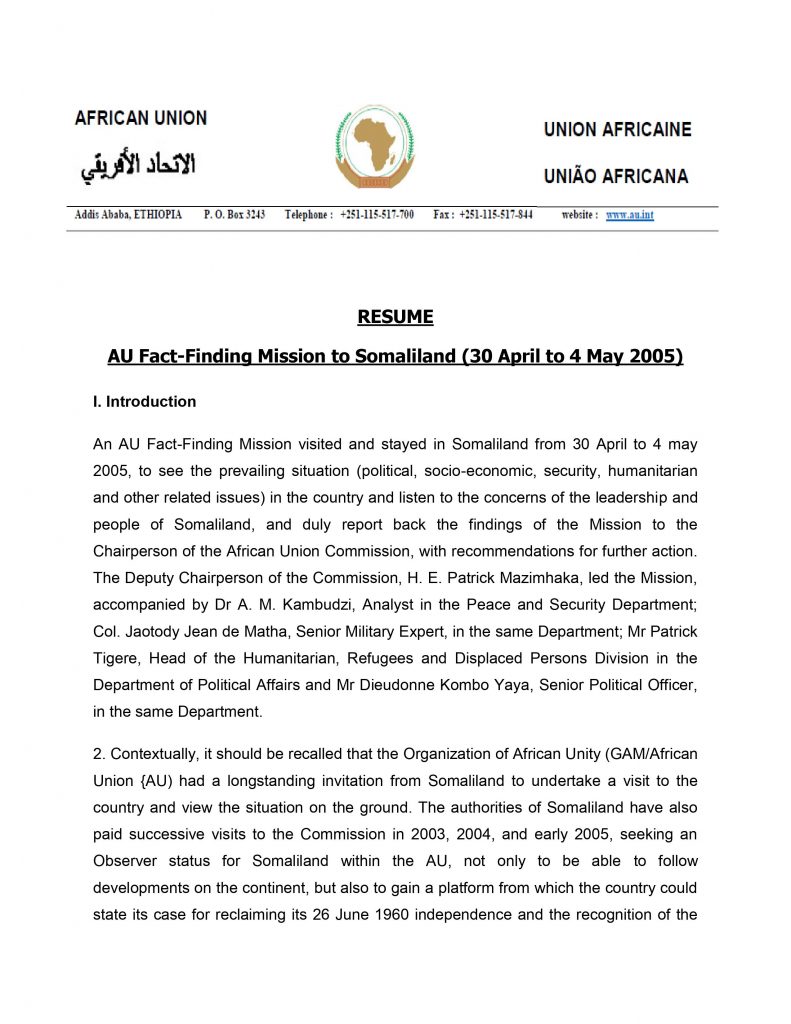 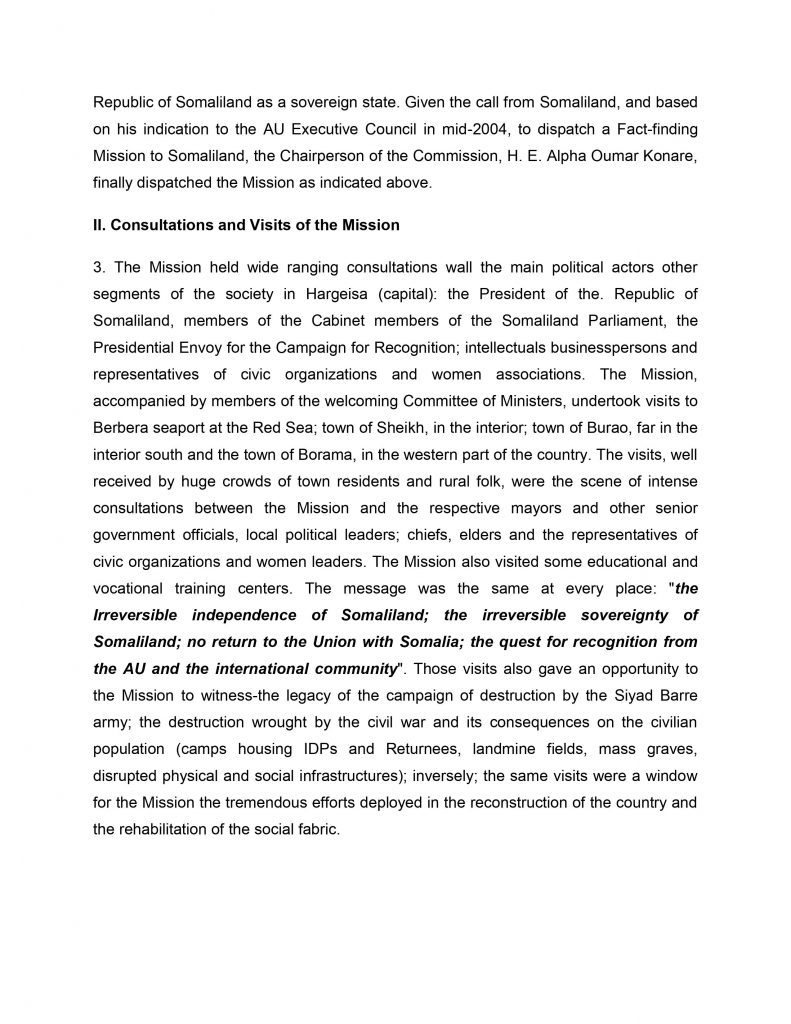 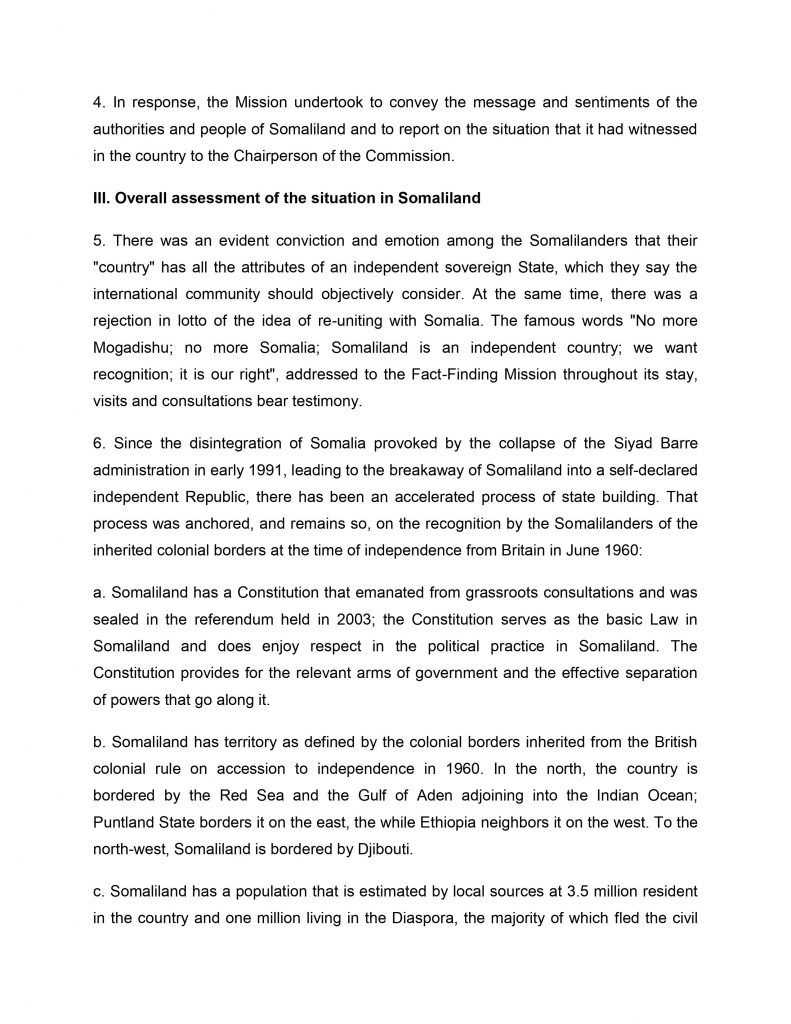 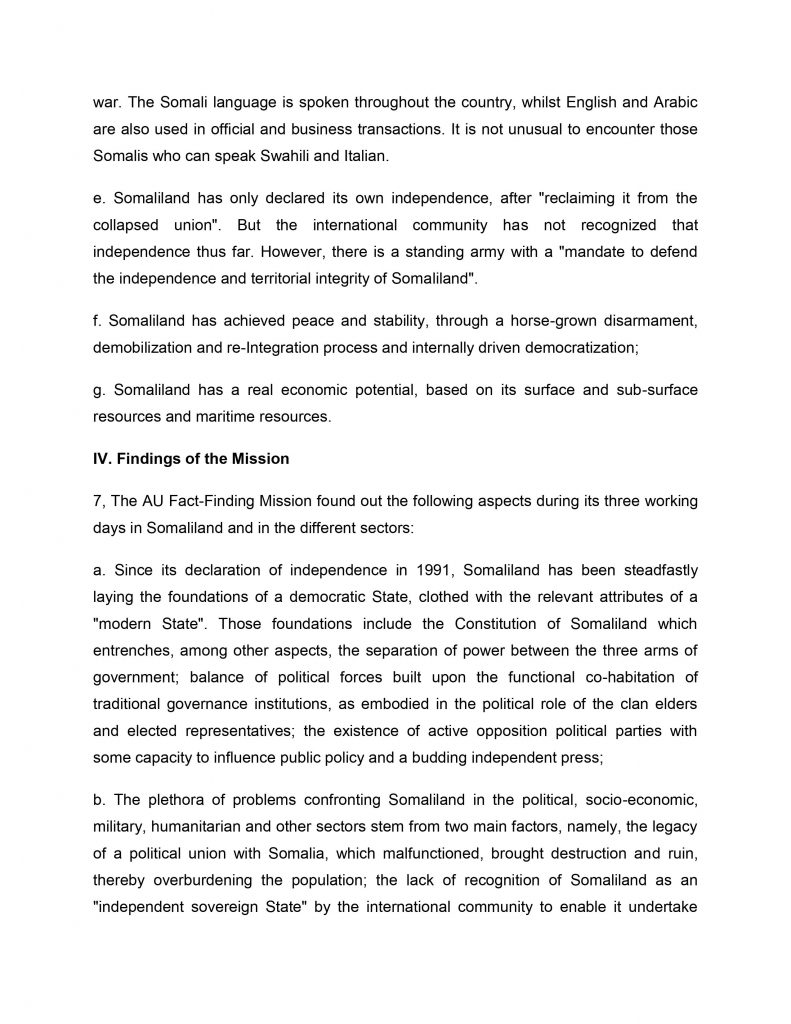 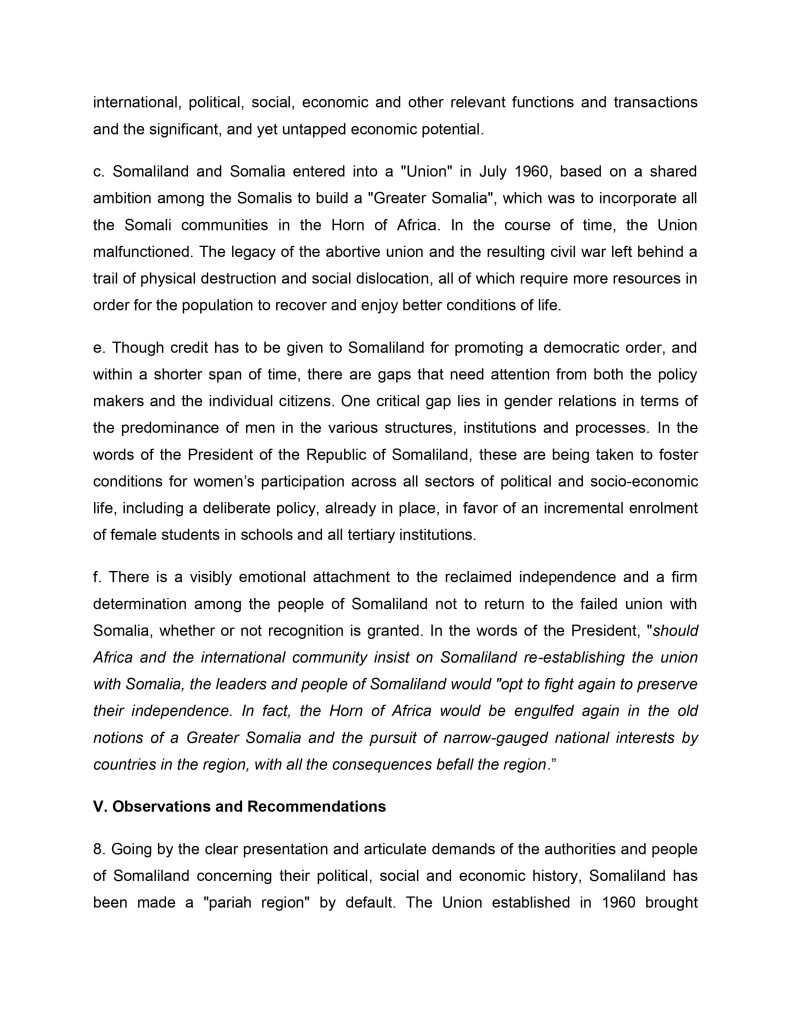 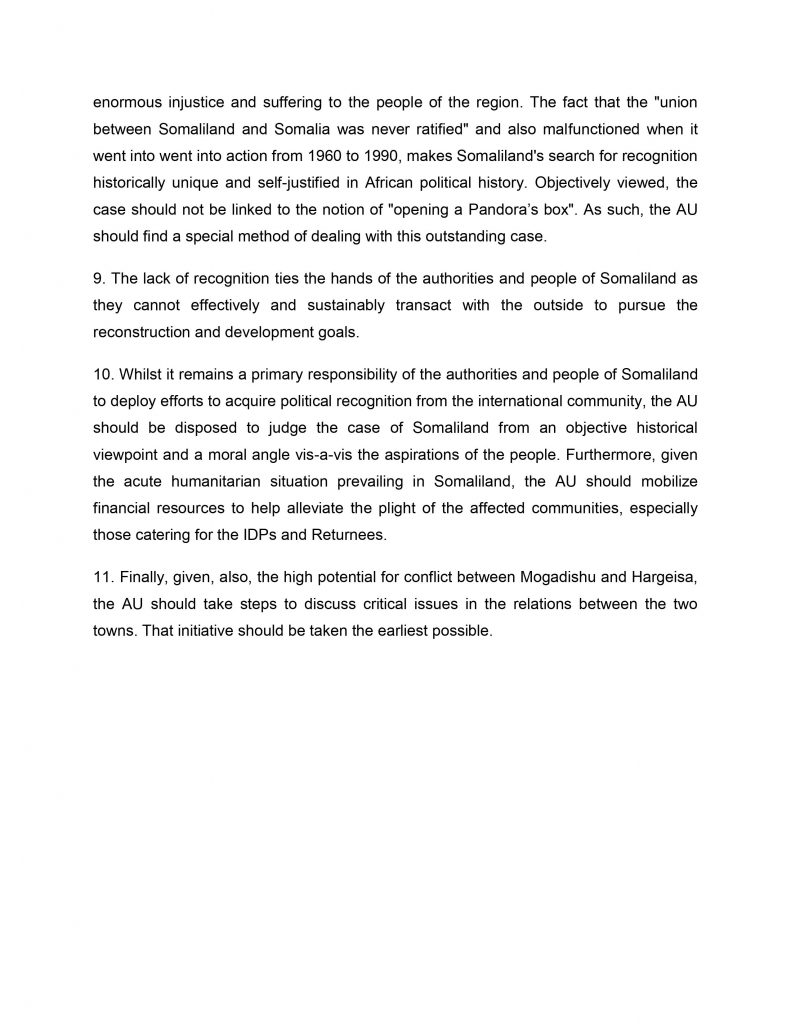