The Republic of Turkey’s involvement in sub-Saharan Africa, in general, and Somalia, in particular, marks one of the most exciting and widely misunderstood geopolitical and strategic events of the twenty-first century. Turkey is now considered a resident power in the Horn of Africa and the Red Sea region. By resident power, we mean states that do not possess territory outside a particular region, but nonetheless must be taken into consideration in terms of that region’s security and politics. Turkey, a state that geographically straddles Europe and the Middle East, possesses no territory in the Horn of Africa but nonetheless is a relevant state actor vis-à-vis the Horn’s politics and security. In short, the actions Turkey takes in Somalia have a direct impact on the region.

From its humble beginnings as a humanitarian relief actor in 2011, Turkey has become a political and economic heavyweight in the region, with trade topping $650 million with Ethiopia, flights operating daily from Istanbul to Djibouti, Addis Ababa and Mogadishu, and Turkish officers training the largest contingent of Somalia’s armed forces in Mogadishu.1 Its largest foreign embassy in the world is in Somalia’s capital, Mogadishu, and Turkish companies operate Somalia’s most critical and lucrative infrastructure: Mogadishu’s international airport and port. The Turks have built hospitals, paved roads and thousands of Somalis are educated in Turkey each year. A marvelous tactility surrounds Turkey’s actions in Somalia. This separates it from other external states that have participated in high-profile (and high profit) ventures in Somalia for years with little to nothing to show for it.2

Turkey’s presence is welcomed by many in the Horn—its president (and former prime minister), Recep Tayyip Erdoğan, is so popular that many Somali baby boys are named after him; girls are named Istanbul. While Ethiopia has been the quiet epicenter of Turkish investment, and Sudan has been integral to Turkish diplomacy in Africa, it is in Somalia that Turkey has made the biggest international splash. This has generated fears about Turkey’s power projection to the region. The rulers of some Arab Gulf states see a neo-Ottoman grand strategy at work in Ankara’s attempts to restore an Ottoman port town in Sudan and Turkish control of critical dual-use infrastructure in Somalia. Accordingly, they have taken measures to rollback what they see as undue Turkish influence in their backyard.3 In the Horn itself, however, Turkey’s image remains generally positive.4

Given its precipitous rise as an important factor in the region’s political economy, many scholars have attempted to explain Turkey’s sudden interests and actions in the region and, more particularly, Somalia.5 What is clear is that Turkey’s humanitarian impulses were quickly superseded by economic motivations.6 These, in turn, were complemented with an increasingly robust Turkish political presence in Mogadishu. In fact, writing about Turkey in Somalia really means writing about Turkey in the capital.7 This is entirely in line with nearly all external state actors operating in Somalia, but it also means the peripheries of this vast country are frequently ignored. As such, little attention has been paid to Turkey’s actions outside Mogadishu, in the country’s federal states and autonomous or independent regions.8

To fill this gap, the article offers a (re)appraisal of Turkey’s engagement with Somalia from the vantage point of the Republic of Somaliland, a de facto independent, but de jure internationally unrecognized political entity. Using a qualitative methodology supported by interviews and observations from Somaliland, the author critically reassesses Turkey’s posture, actions and interests, contextualizing them with Somaliland’s core national interests. The findings demonstrate that Turkey is negatively perceived in Somaliland on account of Ankara’s “One Somalia” policy, its training and arming of the Somali National Army (SNA) and its ongoing support of Mogadishu’s political elite who wish to see a return to the pre-civil war Somali Union. Thus, both the underpinnings and combination of Turkey’s actions, while certainly not directed against Somaliland per se, have the potential to negatively affect Somaliland’s national interests, cherished independence and sovereignty of action.

Somaliland occupies a strategic location at the southern entrance to the Red Sea (see Map 1). It has been de facto independent from the Somali Union since 1991, but remains internationally unrecognized, and is claimed by Somalia’s government. Mogadishu believes it has strong claims to Somaliland, and the international community of states tacitly agrees. It is Somalia, not Somaliland, that occupies seats at the United Nation (UN) and the African Union (AU); Mogadishu hosts international embassies, Hargeisa, Somaliland’s capital, does not (with limited exceptions). This, despite the fact that Somaliland—previously British Somaliland, a British Protectorate for over three-quarters of a century—achieved its first independence on June 26, 1960, and was duly recognized by 35 states and the UN (see Map 2).9 Nevertheless, caught up in the wave of Somali nationalism sweeping across the region, the newly independent Somaliland opted to enter a voluntary union with what was formerly Italian Somalia, an Italian colony and, subsequently. an Italian Trust Territory.10 On July 1, 1960, the two states formed the Somali Republic or Somalia.

Figure 1: The Republic of Somaliland. Source: By Petercorless – This vector image includes elements that have been taken or adapted from this file: Us-attack-in-somalia-01082007-2134.svg (by Petercorless~commonswiki)., CC BY 2.5, https://commons. wikimedia.org/w/index.php?curid=105638490 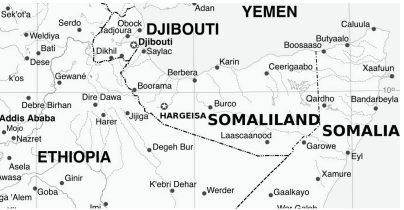 The promise of the union quickly faded as Somalilanders found themselves sidelined from key political posts in the union’s new capital, Mogadishu, by their more numerous cousins who were, after all, on their home turf. Just one year after its promulgation, Somalilanders voted against the Union Constitution and, in December 1961, military units revolted in Hargeisa in a failed bid to restore Somaliland’s independence. The union’s initial attempts at democracy, already seeing the first signs of rot by 1961, were binned in 1969 when the army’s commander, Mohamed Siad Barre, led a successful coup d’etat. Somalia became a “top-down developmental dictatorship” where Siad elevated his own Darod clan and consolidated his power.11 Somalia experimented with Marxism and curried favor with the Soviet Union, fielding one of the largest and best-equipped armies on the continent, only to cozy-up to the United States just prior to Barre’s disastrous invasion of Ethiopia.12 The Ogaden War sowed the seeds for an eventual Somali civil war (actually, multiple wars), the results of which continue to reverberate. The death knell of the Somali Republic finally came in 1991, the same year Somaliland declared its exit from the union and reestablished its independent statehood.13

In 2011, when Turkey’s then prime minister, Erdoğan, visited Mogadishu, the Republic of Somaliland was already two decades old. Given the intransigence of the Somaliland issue, and the instability its undecided status brings to the Horn region, the ingress of a new and hands-on external state such as Turkey offered the opportunity to shake things up. Indeed, the humanitarian nature of Turkey’s initial foray into Somalia looked benign, even promising to Somalilanders. Turkey’s economic, political and military power as well as its Ottoman history in Somaliland made it a desirable partner.14 Yet Mogadishu is the locus of Turkey’s energy and outreach, not Somaliland. Despite this, Somalilanders visit Turkey for medical treatment or for higher education. As such, if Turkey’s actions in Somalia are removed from the equation, its reputation holds up quite well in Somaliland.

Ten years on, its reputation in Somaliland is in tatters. Somaliland’s unique legal and political limbo have conspired to translate Turkey’s support of the Somali government into a zero-sum game, one where the accrual of more power by the Somali state—the political elite comprising successive Federal Governments of Somalia (FGS)—equals a corresponding decrease in power for Somaliland. In this reductionist scenario, Somalia’s political leaders will eventually amass enough force to exercise a monopoly on violence over the length and breadth of the historical Somali Union. That Somaliland considers itself legally and politically separate—based on current and historical precedence— is immaterial to Mogadishu’s leaders; to them, Somaliland forms an integral part of Somalia. This situation turns the ostensibly well-meaning policies of Turkey and other external states—and, by extension, their official support for “One Somalia”—into a loaded gun aimed directly at Somaliland.15

Given their history, Somalilanders understandably pay great attention to and cherish their sovereignty and territorial integrity. These, along with international recognition for Somaliland’s independence, form their core national interests. Somaliland fulfills the criteria for legal independent statehood as understood by both the AU and the UN. Its independence therefore sets no new legal precedents. Yet its successes—its democratically elected government prints its own money, issues passports and monopolizes the legitimate use of force across the majority of its territory—performed over the course of three decades with little to no outside assistance, have not resulted in its official recognition.16 This fact, one for which successive Somaliland governments bear partial blame, only adds insult to injury for the three generations of Somalilanders who have grown up outside the broken union . 17 Bashir Goth, Head of the Somaliland Mission in the US, stated: “when you’re fighting for recognition [of Somaliland’s independence], everything else becomes secondary.” Somalilanders largely agree, and 97 percent supported their independence from the Somalia Union in a 2001 referendum.18

This raises the stakes exponentially for Somaliland and offers a great deal of explanatory power when it comes to the exasperation expressed by Somalilanders about Turkey. As such, Turkey’s empowerment of the FGS and the SNA—very much in line with the primary national interests of Somalia and directly threatening those of Somaliland—has the potential, more than any other development over the past three decades, to snuff out Somaliland’s independence. This is therefore a highly emotive issue, one that Dr. M. Nasir Ali, Director of the Institute for Peace and Conflict Studies at the University of Hargeisa, voiced when he stated: “Turkey is seen as an actor that is not impartial when it comes to Somalia-Somaliland issues. We see Turkey as an actor which is not neutral but one that backs Mogadishu’s rulers.” Ali opined, “Why do we see millions of dollars going to Somalia [from Turkey]?… Turkey is a state that is allying with Somaliland’s counterpart [Somalia] that is adversarial.”

For his part, Suleiman Elmi, a management consultant for Somaliland’s Ministry of Finance, opined Turkey’s “One Somalia” policy was informed by its own national interests, namely its domestic political problems associated with the Kurdish issue. According to Elmi, Turkey’s “Kurdish problem” meant that Ankara shrunk away from any talk of separatism. He argued, however, that the background of Turkey’s conflict and the ongoing political issues bedeviling Somalia-Somaliland are “totally different,” because Somaliland was a separate entity—as a British Protectorate, and subsequently an independent state—prior to voluntarily forming a union with the Italian Trust Territory of Southern Somalia. Elmi’s reference to the ongoing armed struggle for an independent state or autonomy in Turkey’s southeast by ethnic Kurds was echoed by Ali, who highlighted that Somaliland’s intellectuals and government both understand Turkey’s government links the issue of Somaliland’s independence with Turkey’s own Kurdish problem. “This is why Turkey is antagonistic toward Somaliland’s independence,” Ali explained. “[Turkish leaders think] If we show sympathy for Somaliland’s independence, then this will be picked up on by [Turkey’s] Kurds and used against the [Turkish] state.”

Even as Somaliland and Somalia held talks circa 2012 to 2016, as described below, the policies and actions of Turkey and other external states operating in Somalia continued to support “One Somalia.”20 This brazenly ignored on-the-ground realities, such as Somaliland’s strong legal case for independent statehood and recognition; its decades of sovereignty as well as its history; and lastly, the fact Somalia’s FGS does not hold a monopoly on the use of force—legitimate or illegitimate—in Mogadishu, let alone in regions outside the capital.21 In other words, the FGS is legitimate in the eyes of the international community, but illegitimate in much of the country it claims to govern. How then does the international support for “One Somalia” make sense? Elmi vented his frustrations: “Honestly, I don’t know what the international community wants as a whole. There is not one [Somali] nation. The reality is very different. Demanding ‘One Somalia’ over and over again will not lead to a settlement.”