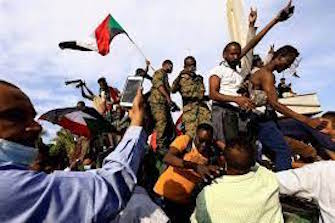 U.S. policy has been largely ineffectual in reversing democratic backsliding in the Horn of Africa.

The final days of 2021 in the Horn of Africa are demonstrating just how contagious authoritarianism and contempt for popular will can be—and how dangerous. On December 25, pro-democracy protesters in Sudan demonstrating against military rule were met with violence and intimidation, as has been the case week after week since the October 25 coup. On December 26, the leader of the coup, General Abdel Fattah al-Burhan, granted security services new emergency powers to hunt down Sudanese citizens resisting military rule, as well as immunity from prosecution. The rehabilitation of Bashir-era figures and attempts to control information available to the population should disabuse the United States and others who claimed to be “encouraged” by the November 21 political agreement—which freed civilian Prime Minister Abdalla Hamdok from house arrest and reinstated him into the military-dominated transitional government—of any notion that this step represented a viable way forward.

In Somalia, the grim timeline marches on. On December 27, President “Farmaajo,” who has remained in office past the expiry of his mandate in February, announced that he was suspending Prime Minister Mohamed Hussein Roble—despite the fact that he does not appear to have the constitutional power to do so. Roble, in turn, has pledged to disregard the president’s action. The tussle between the two men threatens to spill over into armed conflict and further delay an attenuated electoral process that is barely clinging to life support, worsening the already difficult outlook for peace and security in Somalia.

For leaders in Washington aiming to reassert global leadership in defense of democratic principles, these events also point to an urgent need to marry statements of concern with meaningful policy steps to increase the costs of abusive, self-serving power grabs and ramp up support for the forces taking real risks to resist them. Perhaps the State Department’s warning that it is “prepared to act” against obstructionists in Somalia indicates a shift in this direction.  As the region lurches from crisis to crisis, an understandable impulse to accommodate various elite interests in order to temporarily defuse tensions has yielded neither stability nor space for progress toward accountable governance. What indulging this impulse does do is encourage would-be autocrats to trample international norms and bully their populations, then frame empty promises and cosmetic changes as a respite from crisis. Authoritarian forces are learning from each other’s experiences. The United States should learn and adapt its approach as well.