The whole of Somaliland, today, erupted in huge rallies of appreciation, support and gratitude to the bold, far-seeing MPs of the United Kingdom who called the government to formally recognize the 31-year-old Republic of Somaliland this Tuesday. 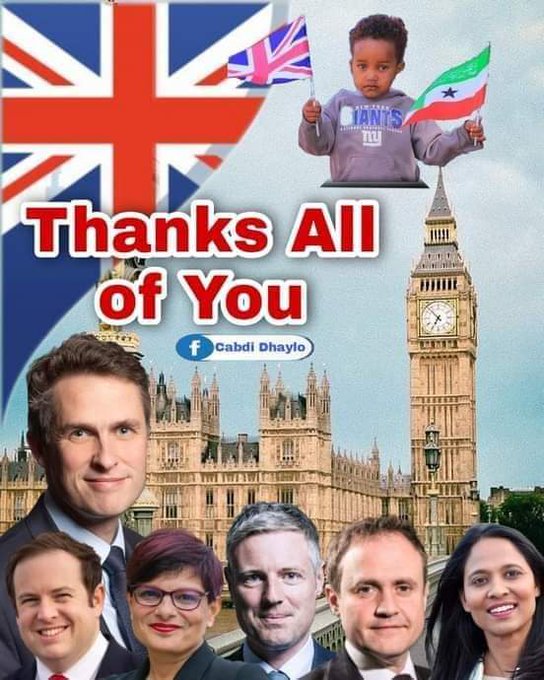 Nationwide, Somalilanders of all walks of life and age spontaneously and colorfully sang and danced their jubilation that their perseverance was coming of age on international, high-profile forums such as Britain’s House of Commons.

Young and old, government and opposition, Somalilanders waving the national flags of the Republic of Somaliland and Britain expressed how jubilant, proud, and happy they were with what they had and, on the same token, how confident they were in their resilience in the face of innumerable adversities was paying off at long last.

Many of the resultant scenes tugged at hearts moving beholders to happy tears.

“I was born in a free Somaliland that has reclaimed its statehood. I was raised and educated here in peace and prosperity. I do not believe I have missed one step in this long journey, and I am confident the world sees with me how I deserve to stand equal among my peers in the world,” a young girl in her 12th form in secondary said.

Many of her friends equally echoed similar sentiments articulating their hope and confidence.

Equally touching was police officers dancing with a public they were at one with.

By doing so, the police officers inspired the whole rally to fall in step.

The Somaliland Police Commissioner, General Mohamed Sanqadhi, announced that a number of officers were each promoted to a rank higher for the spirit and creative crowd control they have shown in the morning rallies.

“The world can no longer ignore a republic of Somaliland that has come of age. Our three-decade-long quest for an international acknowledgment of the statehood we reclaimed in 1991 and built from the ashes to a flourishing peaceful democracy is a fact that can not be sidestepped,” His Excellency the Vice President of Somaliland, Abdirahman Abdulahi Ismail said.

On Thursday, the cabinet of ministers chaired by President Musa Bihi Abdi and VP Abdirahman Zeyli’i called the world to heed the rightful calls of Somalilanders and to respect their rights to self-determination and the restoration of the independence they lost to pan-Somalism zeal in 1960.

The cabinet, also, cautioned Somalia to meddle in the internal affairs of the Republic of Somaliland and to admit that the ill-fated, legally unconsummated merger of 1960 can ever be revisited.

Somaliland’s message could not have come in clearer terms than that a united Somaliland beamed out to the outside world today.

The contrast with anarchic Somalia did not escape many in the region or beyond.

Somaliland-born opportunists posing as union-lovers held a press conference in Mogadishu yesterday, Friday, where they expressed in the quest they held onto to find places in the Somalia government structure which their homeland was not a signatory to. They claimed that their seats were being looted to align them with the whims and wishes of the President and the Prime Minister – especially the latter, this time around.

Their despondent cries of yesterday in a city where they were not wanted starkly contrasted the jubilance and joy of today in the home they left behind. Most of Somaliland see them as traitors and treacherous opportunists in an alien land.