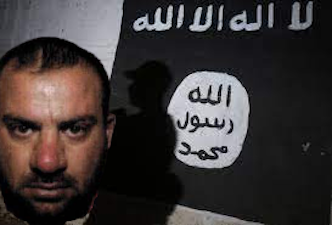 It was the biggest US raid in the country since the 2019 operation that killed ISIS leader Abu Bakr al-Baghdadi.
Qurayshi blew himself up as US forces approached his compound, Biden administration officials said, and the explosion resulted in multiple civilian casualties, though there was a discrepancy between the Biden administration and a Syrian civil defense group over how many. There were no US casualties, according to the Pentagon.
Biden spoke from the White House Thursday morning to announce that the operation had taken “a major terrorist leader off the battlefield,” saying the US had chosen to use special forces the operation in order to try to minimize civilian casualties.
“Thanks to the bravery of our troops, this horrible terrorist leader is no more,” Biden said from the Roosevelt Room. “Knowing that terrorist had chosen to surround himself with families, including children, we made a choice to pursue a Special Forces raid at a much a greater risk to our own people rather than targeting him with an airstrike.”
Pentagon press secretary John Kirby said in a statement late Wednesday night that the mission was conducted by US Central Command, which controls military operations and activities in the Middle East.

The Pentagon will conduct a more thorough after-action review of the raid. But one senior administration official said that “at the beginning of the operation, the terrorist target exploded a bomb that killed him and members of his own family, including women and children.”
“While we are still assessing the results of this operation, this appears to be the same cowardly terrorist tactic we saw in the 2019 operation that eliminated al-Baghdadi,” the official said.
White House press secretary Jen Psaki said Thursday that the death of Qurayshi “delivers a catastrophic blow to ISIS” and underscores the US commitment to eradicating terrorist threats.
Four civilians and five combatants were killed during the raid, Pentagon spokesman John Kirby said during a briefing Thursday. US special forces were able to evacuate 10 people, including eight children, from the first and second floors of the building, Kirby said.
The Syrian civil defense group the White Helmets, however, said 13 people were killed, including six children and four women. It remains unclear why there is such a wide discrepancy between the numbers provided by the Pentagon and the White Helmets.
The five combatants include Qurayshi, his deputy, his deputy’s wife and two others outside the compound who exchanged fire with US troops toward the end of the operation. 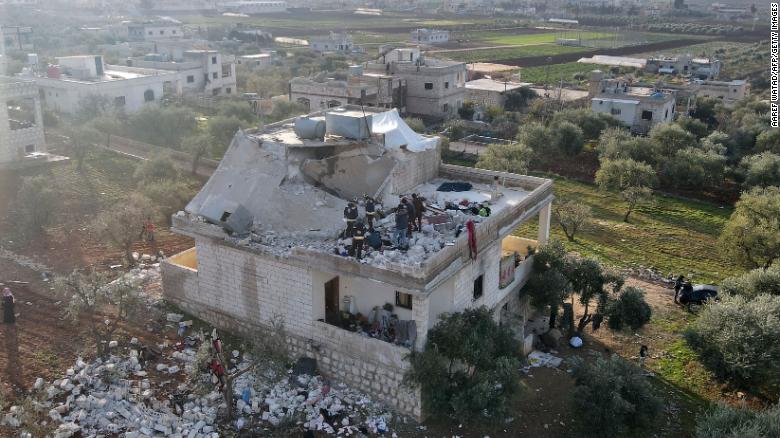 Syrians gather at the scene following the overnight raid by US Special Forces.
After the US forces landed, they announced their presence loudly, asking those inside the building to leave and for others in the surrounding residential area to stay away.
Moments later, the suicide detonation went off, killing Qurayshi, his wife and his children, blowing their bodies outside the building and onto the surrounding land. The blast occurred before any US forces entered the building, the officials said.
US forces entered the compound because a top ISIS lieutenant lived on the floor beneath Qurayshi. When US forces entered the building, the officials said, he barricaded himself with his wife on the second floor and was killed after engaging them.
Another child was also killed on the second floor, though Kirby would not go into detail about how they were killed.
Toward the end of the operation, two more people were killed when a “group of individuals” approached the compound, Kirby said. The group was deemed hostile by US troops, “they were engaged,” and two of them were killed, he added. A senior defense official said helicopters targeted the two men, though the official said there may have been an exchange of fire on the ground as well. The rest of the group approaching US forces fled.
The operation took about two hours to complete from start to finish, Kirby said.
During the raid, a US helicopter had “mechanical issues” and was “properly disposed of at some distance from the site,” one official said. Those issues had nothing to do with “any kind of hostile action.”
Senior administration officials said the US learned months ago that Qurayshi was living in the compound. He never left it, living on the third floor with his family and running the terror operation through a network of couriers. Families with no connection to ISIS lived on the first floor, apparently without knowledge of the terrorist two stories above them.
When Biden was briefed by operational commanders in December, he ordered the Pentagon to take precautions to minimize civilian deaths — a difficult proposition for a target who appeared to intentionally surround himself with children and families as protection, the officials said.

Witnesses and rescue workers told CNN that shelling and explosions preceded an airdrop of US forces shortly after midnight and targeted a house in the Syrian-Turkish border area of Atmeh, in the rebel enclave of Idlib.
In addition to the 13 killed, two people were also injured and a building was “partially destroyed” following the raid, according to the White Helmets. 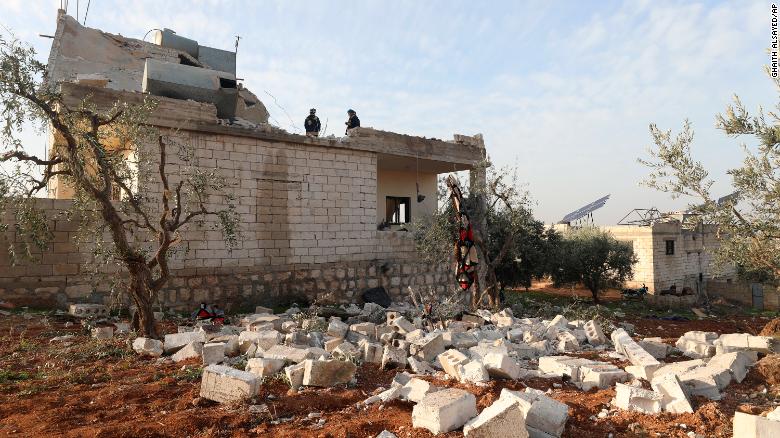 People inspect a destroyed home in the village on Thursday.
One witness in Atmeh, who asked not to be named for security reasons, said that machine gunfire erupted from at least three helicopters flying overhead, followed by an explosion some minutes later. The area has a heavy presence of Hay’at Tahrir al-Sham (HTS) forces, that were formerly affiliated to al Qaeda.
“I heard from a distance a person who is speaking Arabic in an Iraqi accent asking for families to evacuate the area and they will be safe,” said the witness. “I saw from a distance that there were machine guns shooting back from the ground towards the helicopters.”
The witness said two of the three helicopters he saw landed an hour after the clashes began. “Around 3:20 a.m., the helicopters left and I saw a faraway light which looked like a fire,” said the witness.
The witness also said he heard what sounded like drone strikes, and said HTS forces were preventing civilians from entering the area.

ISIS named Qurashi as its new leader in November 2019 at the same time that the terror group confirmed al-Baghdadi had been killed.
Biden administration officials said he oversaw ISIS branches abroad — including the one in Afghanistan responsible for the deaths of American Marines last year — and played a key role in the genocide of members of the Yazidi ethnic minority. 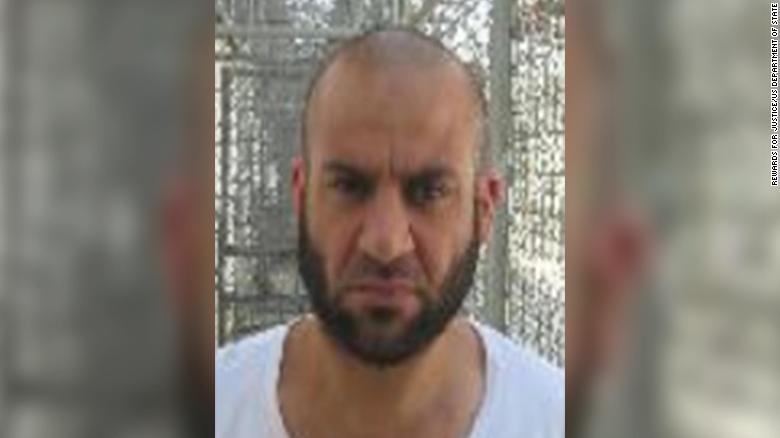 Abu Ibrahim al-Hashimi al-Qurayshi killed himself and his family after igniting a bomb at the beginning of the operation, according to a senior Pentagon official.
In 2008, Qurayshi was captured and interrogated by US forces in Iraq, where “he sang like a canary,” a top former counterterrorism official said.
“Investigators gained enormous insights about (Al Qaeda in Iraq) because of what he told them,” Ambassador Nathan Sales, the US Coordinator for Counterterrorism at the State Department under President Donald Trump, told CNN.
Sales was in his role at the State Department when US forces tracked down and killed Baghdadi in northern Syria in late 2019. Qurayshi, Sales says, was an “obvious choice” to succeed Baghdadi.
“He was sufficiently steeped in all these aspects of ISIS leadership — the political dimensions, the religious dimensions, and the operational dimensions — that he was the obvious pick to take over,” said Sales, who is now at the Atlantic Council.
The US has repeatedly targeted al Qaeda and its affiliates in northwest Syria, with the Pentagon acknowledging at least one strike in recent months may have resulted in civilian casualties. But Wednesday’s operation was the largest in scale since a two-hour raid killed ISIS leader Baghdadi in northwest Syria in October 2019.
Last September, the military targeted a senior al Qaeda leader near Idlib, Syria, according to a statement from Central Command. One month later, the military carried out a drone strike against Abdul Hamid al-Matar, a senior al Qaeda leader, Central Command said.
And then in December, the military targeted Musab Kinan, a senior leader of al Qaeda affiliate Hurras al-Din, near Idlib. Central Command opened an investigation into the possibility of civilian casualties from the strike, but the Pentagon was unable to provide updates at the time.
Meanwhile, various parts of Syria and Iraq have seen an ISIS resurgence. Last month, over 100 ISIS fighters attacked a prison in Syria’s northeast in an attempt to free jailed members of the extremist group. At least 200 prison inmates and 30 security forces died in the clashes that followed the thwarted jail break.