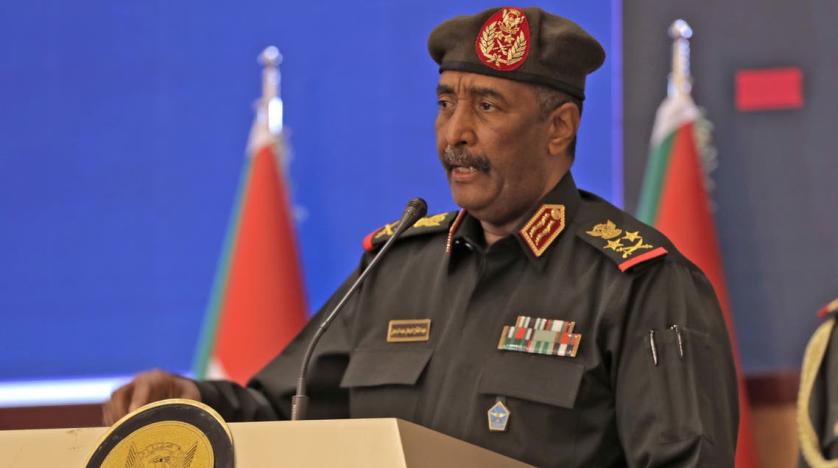 Sudan’s army chief Abdel Fattah al-Burhan denied issuing any orders to kill peaceful demonstrators protesting the military coup and accused the security services and a third party of being involved in the murders.

Speaking during a televised interview, Burhan vowed to step down if the Sudanese parties reached a comprehensive agreement or elections were held.

“If there is a political consensus between the national forces or elections are held, the military institution and I will be outside the political frameworks.”

“I do not want to govern Sudan,” asserted Burhan.

The military institution is the authority entrusted with preserving Sudan’s security and unity, said Burhan, adding that it is from the people and obeys their wishes, either by authorization through national consensus or by electoral mandate.

He explained that the army would return to its facilities if the major forces reached an agreement, except the National Congress Party.

The army will meet with the national parties to discuss managing the remainder of the transitional period, noted the military leader.

Burhan expected the political and military forces to reach an agreement soon, saying: “reconciliation is the easiest and the closest.”

However, he stated that any unelected party does not have the right to interfere in the affairs of the military institution or discuss its reconstruction.

Commenting on the consultations between the head of the UN Transition Support Mission in Sudan (UNITAMS), Volker Perthes, and Sudanese parties, Burhan said that the UN official is a mediator and does not have the authority to present an initiative to address the political crisis.

Burhan hoped that a Sudanese party would present the initiatives and that former Prime Minister Abdalla Hamdok had agreed to be part of the National Consensus Committee.

Burhan denied the existence of any division within the army or between the military and the Rapid Support Forces led by his deputy Mohamed Hamdan Dagalo.

Also, Burhan described the relations with Israel as “sensitive,” admitting, for the first time, the exchanged visits between Khartoum and Tel Aviv.

The military leader stated that he does not want enmity with any party to hinder Sudan’s integration into the international community.

“It is not a secret. The security cooperation between us has not stopped since I met the former Israeli Prime Minister.”

Burhan said the visits are not political but are of a security and intelligence nature, asserting that not a single senior official visited Tel Aviv. However, the delegations that visited Israel are security groups, noting that these mutual visits led to the arrest of several terrorists.