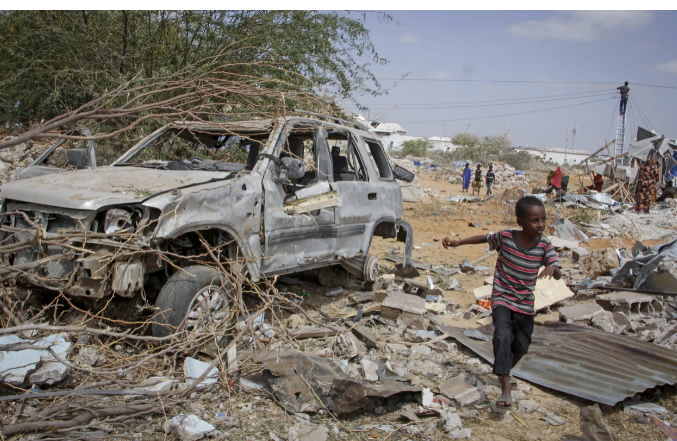 In the latest violence to rock Somalia, militants overran the Af Urur military base in the north of the country on Sunday, killing four soldiers.

That ambush comes barely a week after two deadly attacks: one on the Halane base near the airport in the capital, Mogadishu, and twin blasts in the city of Beledweyne, in central Somalia, which killed 48 people and injured more than 100.

Amina Mohamed Abdi, a prominent opposition politician and outspoken government critic, was among the people killed in the Beledweyne explosions.

Al-Shabab said it carried out the attacks to target politicians contesting Somalia’s elections, which are already more than a year overdue.

The election of the lower house, which has been ongoing for several months, is now scheduled to be completed on March 31.

This will pave the way for lawmakers to pick a president, a process that has been long and deeply troubled.

President Mohamed Abdullahi Mohamed, also known as Farmaajo, extended his mandate by two years in April 2021 after his term expired with no agreement on how to replace him.

The president has been at loggerheads ever since with Prime Minister Mohamed Hussein Roble, who accused Farmaajo of an “attempted coup” when he extended his term.

The political infighting between the two has given the insurgents free range to operate, said Hussein Sheik-Ali, a former national security adviser who is now the chairman of the Hiraal Institute, a Somalia-based security think tank.

“This upsurge in attacks comes periodically when they [al-Shabab] feel the government’s weakness,” Hussein said. “They try to penetrate and disrupt elections because of this prolonged election dispute.”

Abdirahman Aynte, a former federal planning minister, told DW that the political contest between the president, who was elected in 2017, and the prime minister had created confusion about who is in charge of security forces.

Al-Shabab is seeking to capitalize on this, he said.

“There is no doubt that, whenever you have a squabble and infighting among the political leaders, al-Shabab … would certainly exploit a situation like that,” Aynte said.

“They’ve been doing that for over a decade because the country’s security forces, unfortunately, have been deeply politicized over the past few months and have been dedicated to carrying out politically motivated security operations as opposed to operations against terrorist groups,” he said.

Al-Shabab insurgents, who are linked to al-Qaeda, seek to establish an Islamic state in Somalia.

They want to overthrow the federal government in Mogadishu and are also opposed to peacekeepers operating in the Horn of Africa country under the AU-led AMISOM military mission.

Al-Shabab previously controlled large swaths of the country, but AMISOM forces pushed the group out of Mogadishu and significant parts of southern Somalia.

Despite these setbacks, al-Shabab has still “notched up a series of bloody successes” against both Somali targets and AMISOM troops, the International Crisis Group reported in a recent analysis of the al-Shabab threat.

The uptick in al-Shabab attacks also comes as AMISON’s mandate is scheduled to expire on March 31.

The withdrawal of AMISOM troops was originally planned for December 2020, but it has been postponed several times.

Now, instead of a complete withdrawal, AMISOM is to be replaced by a transitional AU mission, known as ATMIS, on April 1.

Somali security forces are scheduled to only take over all responsibilities in December 2024.

Civil society activist Hodman Ahmed is worried that prolonging the AU-led mission with a transitional period will continue the cycle of violence in her country.

She said it was no coincidence that Somalia adopted a revised transition plan for the ATMIS mission only a day before gunmen tried to gain entry to the Halane base camp, which houses AMISOM, the United Nations and other international agencies.

At the same time, the resumption of the “explosions and killings prolongs AMISOM’s presence” in the country, she said.

Aynte said the delayed elections had significantly contributed to the uptick in violence and the overall insecuDeutsvcrity.

“We know that, if this election can be completed in the next maybe two to three months at most, a new empowered administration would certainly be able to dedicate both financial and manpower resources to fight al-Shabab,” Aynte said.

He acknowledged that the presidential vote won’t be smooth.

“It’ll be a very bumpy ride. But, in Somalia, we have gotten used to that,” Aynte said.