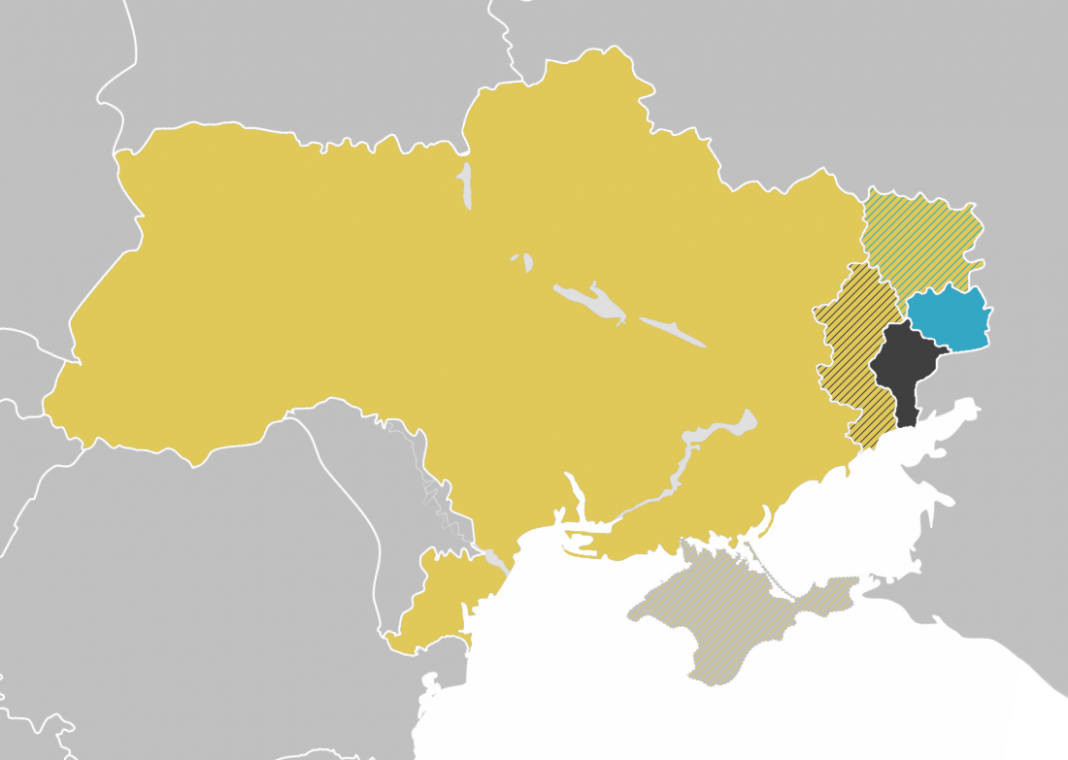 Though now overshadowed by the war, an important political geography event took place in the days leading up to Russia’s invasion of Ukraine, changing some versions of the world’s list of countries.

Back in April 2014, the month after Russia-backed separatists in the peninsula of Crimea declared their independence from Ukraine, Russia-backed rebels in Ukraine’s eastern provinces of Donetsk and Luhansk also announced that they were forming independent countries: the Donetsk People’s Republic (DPR) and Lugansk People’s Republic (LPR). (“Luhansk” is the Ukrainian-language spelling of the place name, while “Lugansk” is the Russian-language version.)

But unlike Crimea, which had already been secured by Russia’s military, and was quickly absorbed into Russia with the permission of its supposed independent government, Donetsk and Lugansk would remain unrecognized for the next eight years – not officially treated as independent countries by any other country, even Russia.*

*That is, unless you count them recognizing each other, or being recognized by fellow Russia-backed South Ossetia, which claims independence from Georgia but is itself barely recognized by any other countries.

In any case, all changed last month, just a few days before the Russian military launched its full-scale invasion of Ukraine. On February 21, Russia officially endorsed Donetsk and Lugansk as independent countries, its president signing a document to grant them what international law experts call “diplomatic recognition”.

While almost all the rest of the world’s countries still consider Donetsk and Luhansk to be part of Ukraine, Russia’s recognition technically elevated the two self-proclaimed countries from the status of “completely unrecognized” (by any UN member country) to “partially recognized“.

So far, Russia is the only country known to have formally recognized Donetsk and Lugansk as independent countries. Close Russian ally Syria made a point of saying it supported Russia’s move to recognize the two self-proclaimed republics, while a few other countries made varying statements of general support for Russia’s side. But up to now no evidence has emerged of them officially offering their own separate recognition.

Though Russia’s government now considers Donetsk and Lugansk to be independent, does that mean they’re actually real countries? Well, most of the world’s governments would say “no” out of principle, but what if we’re just being realistic?

There’s an argument to made for either side. On the one hand, the DPR and LPR do have governments of their own, with military forces and at least some government services, both of which are definitely not controlled by Ukraine. But on the other hand, they’re largely reliant – and increasingly integrated – with Russia, so some people might argue that they’re de facto (“in actual fact”) parts of Russia – for better or worse – rather than de facto independent countries.

Beyond official declarations and diplomatic recognition, independence is a bit of a fuzzy concept, so in the end it depends on your interpretation. There’s not necessarily one correct answer.

After the upgrade of the DPR and LPR, there are only three self-proclaimed countries that aren’t recognized by any UN members at all, but do have governments that act independently of the countries that they’re widely considered part of:

Transnistria – yet another self-proclaimed republic with Russian military support, claims independence from Ukraine’s neighbor country Moldova, while the Republic of Somaliland claims independence from Somalia. Meanwhile, the self-proclaimed Republic of Artsakh (a.k.a. Nagorno-Karabakh) is considered part of Azerbaijan by the UN, but is ruled by a separate government closely connected with the neighboring country of Armenia.

For a more extensive accounting of the world’s partially and completely unrecognized countries, check out our “How many countries are there in the world” explainer, which has been updated for recent events.