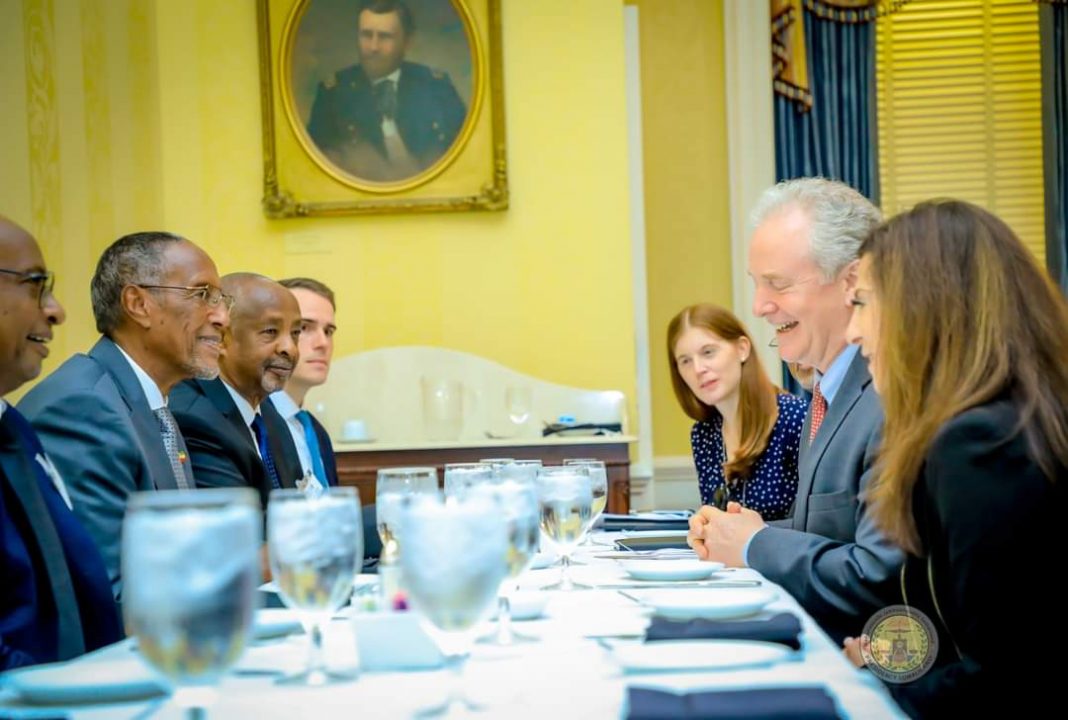 As the US’s grip over countries in the Horn of Africa slips, alternative partners have stepped up. China is one of the countries that has moved in quickly to plug the gaps. analysis by Faisal Ali

In a recent interview, AFRICOM commander Gen. Stephen Townsend was visibly disconcerted when a reporter asked him about relations between Somalia and China.

“There are conversations between the Chinese and the Somalis that happen regularly” he said, “we’ll just have to see.” “They’ve discussed a lot of things” he continued, including the prospect of China setting up its second military base in the Horn of Africa in Somalia – the other being in Djibouti – but said the US was given an assurance that Somalia was its partner, implying it was unlikely to do so. Somalia hasn’t yet commented on his remark.

China has been working to upgrade its ties with the Somali government with both foreign ministers recently meeting on the sidelines of the OIC summit in Pakistan last week.

On March 18th, China made a huge donation to Somalia’s military at a ceremony attended by the country’s top general and its defence minister. The delivery included $5M in defence aid, 20 off-road trucks, 5 field ambulances & 22 mine detectors.

“This is a clear indication of the longstanding and friendly relations between our two countries which dates back centuries”, said Chinese ambassador to Somalia Fei Shengchao.

“Following delays in Somalia’s elections, which have seen the US expand visa restrictions on Somali officials deemed to be undermining democratic processes, as well as a US military withdrawal from the country during the Trump administration, Somalia and China have begun rekindling their relationship”

Somalia has a close but troubled partnership with the US in which Washington provides Mogadishu with support in its war with Al Shabaab through security cooperation, airstrikes and humanitarian aid.

But following delays in Somalia’s elections, which have seen the US expand visa restrictions on Somali officials deemed to be undermining democratic processes, as well as a US military withdrawal from the country during the Trump administration, Somalia and China have begun rekindling their relationship.

Cameron Hudson, a Non-Resident Senior Fellow at the Atlantic Council’s Africa Centre, told The New Arab, that whilst Mogadishu is attempting to mitigate a possible downturn in Somalia-US relations, the alternatives will also have a cost.

“For a lot of countries the choice between China and the US isn’t either or, and specifically in the case of Somalia the US’s approach has tended to be too securitized. Somalia is an example of a country where the US has tended to wield the carrot and stick too heavily,” Hudson explained.

“But the US won’t drop its demands for better governance. The difference between the US and China is that with China there are different strings attached.”

The US and UK have also grown visibly closer to Somalia’s breakaway region of Somaliland. Earlier this month, Somaliland’s president Muse Bihi Abdi returned from a high-profile visit to Washington where he met with Biden administration officials, members of congress and addressed the Heritage Foundation.

The groundwork for the visit was laid last November when Somaliland’s foreign minister Essa Kayd visited the US & Canada to meet with government officials, civil society, opinion leaders & advocacy organisations.

“If we were to sign an agreement and accept China as our ally, it means that the freedom of the waterways of that region could be compromised,” Kayd said. “That’s why we have the Americans paying more attention.”

During his visit President Bihi made an ambitious pitch for recognition of Somaliland’s independence and succeeded in persuading some congressmen, with Rep. Scott Perry drafting a bill to recognize Somaliland “as a separate, independent country.”

Bihi’s visit also earned a commitment for increased US cooperation with the Somaliland Partnership Act. US senator Jim Risch explained that the US should explore all avenues for further cooperation “with stable and democratic partners, like Somaliland.” He also won plaudits for Somaliland among America’s foreign policy intelligentsia.

“Somaliland has stayed faithful to democracy when hardly anyone was noticing,” said Kevin Roberts, president of the Heritage Foundation, one of the US’s most influential and hawkish foreign policy think tanks. “We need to be clear eyed about the competition we’re in with the Chinese Communist Party… Almost alone in Africa [Somaliland] has been immune to Beijing’s overtures and threats.”

“Bihi struck all the right notes in Washington but his audiences were very curated to people who would be amenable to his messaging about China, most of those being lawmakers and think tanks closer to the Republican Party”, Hudson told The New Arab.

However, Molly Phee, the US assistant secretary of state for African affairs, added a caveat to the US’s interest in increased engagement with the breakaway region, saying this would be within a broader framework of the US’s “single Somalia policy.”

“Bihi struck all the right notes in Washington but his audiences were very curated to people who would be amenable to his messaging about China, most of those being lawmakers and think tanks closer to the Republican Party”

The US’s ambassador to Somalia Larry Andre also reiterated his country’s support for Somalia’s revival as a peaceful, democratic country, emphasising that the US is Somalia’s largest donor.

Overall, Hudson doesn’t believe that Bihi’s visit was a harbinger of change in US policy towards Somaliland. “Biden poured cold water on Somaliland’s independence, but what is new is the push by Somaliland to deepen cooperation and its more explicit lobbying.”

MP’s in the UK have warmed to Somaliland too, recently debating a motion on its formal recognition. “Our nations have long historic ties and now it is the time to make history together” Conservative MP Gavin Williamson tweeted, citing Britain’s colonial-era ties to Somaliland.

Tom Tugendhat, conservative chairman of the foreign affairs committee, also expressed his support for the motion. Both Williamson & Tugendhat have long advocated for closer cooperation with Somaliland, with Williamson championing its independence in parliament and visiting the region more than once.

In response, Somalia’s foreign minister quickly got on the phone to Vicky Ford, the UK’s minister for Africa, after which she re-stated the UK policy of letting Somalia and Somaliland decide their future. Williamson slammed the government’s position, as talks to reach a decision have made little progress over the years.

Somaliland and Somalia’s ties have been frosty from the moment Somaliland declared independence, but growing competition between the US and China has overlapped recently with Somaliland’s move to formally develop ties with Taiwan in 2020. Cooperation between the un-recognized de facto republics has deepened since, to the annoyance of both Beijing and Mogadishu.

When Taiwan recently hosted officials from Somaliland, China’s foreign ministry said Taiwan was “fanning the flames to undermine the independence and unification of other countries, harming others without benefiting themselves.”

Describing the visit as a “milestone”, Somaliland’s foreign minister Kayd quickly hit back saying his country was “born free and we will stay free. We will run our business the way we want.”

Beijing views Taiwan’s outreach to Somaliland as a “minor irritation”, says David Kiwuwa, a professor at the University of Nottingham’s Ningbo campus and specialist on Africa-China relations. Its attempt to upgrade ties should be viewed in the context of Somalia’s much longer relationship with China.

“Cooperation between [Somaliland and Taiwan] the un-recognized de facto republics has deepened since, to the annoyance of both Beijing and Mogadishu”

“China and Somalia have had a much longer diplomatic relationship established 61 years ago and today’s relationship is simply a strengthening of those enduring ties. Somalia still signs on to the “One China” policy and likewise Beijing reciprocates with a one Somalia principle,” said Kiwuwa.

China also increasingly appreciates the strategic importance of the Horn of Africa, and Beijing’s policy of non-interference has been popular among African states.

Earlier this year China appointed Xue Bing as its special envoy for the Horn of Africa, and he has wasted no time differentiating China’s approach from his counterparts, tapping into growing anti-Western sentiment. “Some countries in the Horn of Africa are fed up with the foreign intervention, the preaching from Western countries,” he said.

Sudan’s recent decision to consider a Russian naval base after US criticism and sanctions following the recent coup is the most high profile example of countries in the Horn of Africa seeking out alternative political and security partners.

Eritrea, the region’s most isolated and authoritarian state, struck an agreement with China for $157M in aid, and formed a “strategic relationship” during a two-day visit to Asmara by Chinese foreign minister Wang Yi. China reaffirmed its criticism of US sanctions imposed on Eritrea for its role in Ethiopia’s civil war.

Ethiopia, once a staunch Western ally, has also begun to see-saw. Its UN diplomats sat out a motion to condemn Russia’s invasion of Ukraine in the UNGA, with ties between the US and Ethiopia deteriorating because of Addis Ababa’s war in Tigray.

Ethiopia has long had strong ties with China, its main source of foreign investment, but sought out new allies in the Middle East to support its war effort. “These countries simply have more options now,” Hudson told The New Arab.

Both Russia and China abstained in a UNSC review of an arms embargo on Somalia, a policy which Mogadishu strongly opposes but the US supports. Whilst Somalia’s politicians have faced censure in Washington over elections, Djibouti’s controversial 2021 election which saw the incumbent president Ismail Guelleh secure a fifth term with 97% of the vote was congratulated by the US.

“For now, Gaid says China’s influence will mostly be felt outside Somalia in the broader Horn of Africa because of its lower tolerance for risk”

Djibouti hosts the US’s main military base in Africa and China’s only permanent one outside its territory. When China considered working with Kenya to establish a base there, it was met with a stern American warning.

The big issue for Somalia is its fragility & political division, says Samira Gaid, executive director at the Hiraal Institute, a Somalia based think-tank focused on security in the Horn of Africa.

“This makes it easier for Somalia to be influenced by its Western donors. Djibouti’s leadership by contrast is better able to act with unity of purpose, and as a result it can pick and choose its relationships based on how it determines its national interest.”

For now, Gaid says China’s influence will mostly be felt outside Somalia in the broader Horn of Africa because of its lower tolerance for risk. The recent delivery of military aid from China however, is a “sign of more to come.”

Faisal Ali is an Istanbul based multimedia journalist. He writes about East African politics.