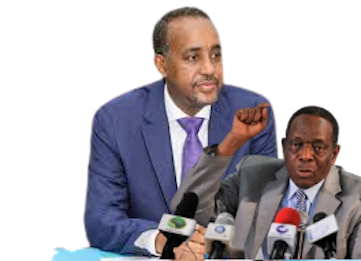 The Prime Minister of Somalia, Mohamed Hussein Rooble, ordered that the AU Commission Special Representative, Francisco Madeira, leave the country within 48 hours of the publication of the expulsion order.

The letter from the PM accused Madeira of ‘engaging in acts that are incompatible with his status as Representative of the African Union Commission’.

The statement requested the AU Commission, to whom it was addressed, to ‘recall Ambassador Francisco Madeira and comply with the request’.

The expulsion of Madeira follows five months after a summary expulsion of his deputy, Simon Mulongo who was sent packing on uncannily similar charges on 5 November 2021 by the federal government.

In January 2019, Villa Somalia kicked out Ambassador Nicholas Haysom, the Special Representative of the United Nations’ Secretary-General, on trumped-up accusations declaring him persona non grata following disturbing riots in the Southwest State of Somalia, Baidoa, and a questionable hand the government had in loss of lives there.

This usually happens when a foreign mission speaks out audibly against one misconduct or another affecting the international community’s expectations of the status quo.

The weak government of Somalia is propped up through an expensive portfolio of aid and direct financial inputs labeled as security or related fields. Equally, the world, especially, Africa, has lost hundreds of troops to keep the peace.

And, yet, Somalia behaves like an authoritarian regime that is accountable to none – not to its public, not to the international community.

Contrasting, the Republic of Somaliland, to the north, costs the world a fraction of the billions of dollars that it poured into Somalia for the past three decades or so and none of the lives lost. But, inexplicably, Somalia still remains the prodigal son leading many observers to suspect agendas none of which altruistic.