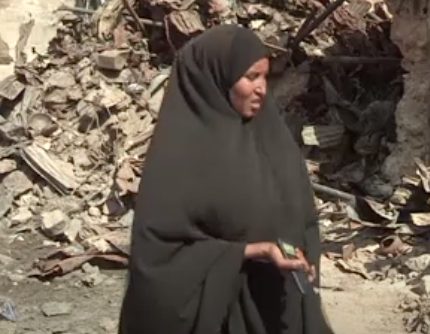 In response to the destruction caused by a blaze in Hargeisa, the United Nations deployed an inter-agency team of technical experts to work with the government and the response committee to assess the damage and support the rebuilding of a marketplace.

On the site of what used to be Somaliland’s largest market, only ruins are left. More than a week after a fire ravaged the Waheen market, in central Hargeisa, the United Nations deployed an inter-agency team to work with the government. And their task is immense.

The market spread out over five square kilometres. The destruction of many goods has led to scarcity and inflation in the city. The other dramatic consequence is that hundreds of business-owners like Zainab Hassan Warsame are now penniless. “My boutique used to stock clothes and I used to sell all types of clothes, she says. It was a big boutique. I used to feed my elderly parents, my children, as well as my daughters’ children – in total, ten people’s livelihoods depended on my business. I was the only breadwinner for my family and they depended on this boutique, but it is no more.”

UN technical experts dispatched to Hargeisa will back local efforts to assess the damage and support the rebuilding of the marketplace. A preliminary report released by a national taskforce looking into the fire estimates losses of between 1.5 and $2 billion.

The team comprises experts in environmental issues, communication issues and socio-economic among other things. “I do recall speaking to one of the women and just asking her about the impact that this had had on her and she mentioned two critical things, Jacqueline Saline Olweya, the UNDP Deputy Resident Representative for Somalia said.One is the heat that she has to bear is great because of the destruction of where she was selling her wares, …… And she was talking about the very limited resources she turned out every year but that is now destroyed, she does not have it anymore, so the site visit also helped us put a human face to the tragedy.”

The marketplace was a significant source of income for the government revenue. According to Somaliland’s Chamber of Commerce the fire accounted for 40 to 50 per cent of the city’s economy. UN experts and local authorites will issue a joint assessment report. It will be used at a meeting of international donors takin place next week in Kenya.