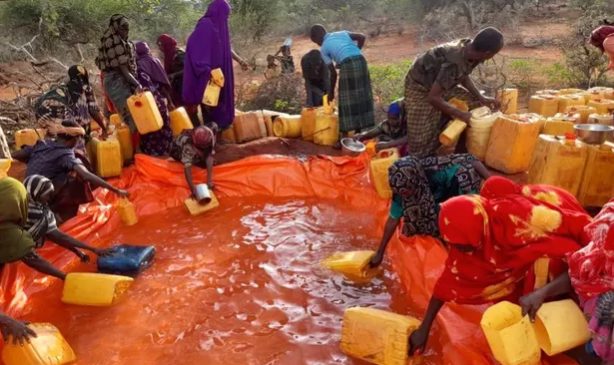 Analysis: with more than 6 million people in need, there is anger at perceived lack of action from the government and the UN

The UN this week issued a stark warning on Somalia, projecting that 350,000 children could starve to death without urgent action.

The country is in the middle of a drought that is already killing people. Some regions in the Horn of Africa are the hottest they have been since satellites started recording data 40 years ago, according to an analysis by the World Food Programme.

Humanitarian aid organisations have spent billions over the years in this east African nation yet few Somalis have felt any real impact. “They spend all their money on overhead and salaries and we are left with pennies,” said Hodan Ali, director of the durable solutions unit for the Benadir regional authority, which contains Mogadishu, the capital.

Among a multitude of other costs, money has been spent on security and salaries – in dollars, in the lower six figures for non-Somali UN staff – and logistics, everything from fuel for cars and generators, to laptops, to secure conference rooms. Cash chunks have also gone to the Somali government for “statebuilding”. The government has yet to mount a coherent response to the drought, establishing a committee only in February.

All this before money reaches the bare necessities for civilians: food, water and medical supplies. Even the much-lauded direct cash transfer schemes, which many organisations now use as a better, more nimble way of getting help to those in need, come with huge costs for measuring their effectiveness. Consultants are paid in the range of $600 (£450) a day. These processes are considered necessary to prove to donors that money is not going to al-Shabaab, the insurgent group that controls swaths of Somalia and is embedded with much of the population.

Abdulahi Abdishakur (who goes by Nadeef) is one of a few Somalis mobilising direct aid. Like many, he feels bewilderment and anger with the UN and international aid agencies, which are seen as wasting time and money, complicit with the Somali government, and prone to misallocating resources and getting waylaid by politics.

Nadeef raises money from the diaspora to buy water from private companies that have drilled wells, and then to get it on to trucks. He does his planning from Iowa, where he settled with his immediate family in 2005, spending between $100 and $400 to organise water trucks to supply a remote village. He has relatives across Somalia and visits nearly every year.

“You can bring water for very little, but the politicians are focusing on elections,” said one Somali, referring to the protracted political crisis. They asked to remain anonymous but said they knew of water trucks that could be obtained for as little as $150, although it is now getting more expensive.

Adam Abdelmoula, UN humanitarian coordinator for Somalia, does not deny the problem. “The absence of a functioning government for so many decades allowed humanitarian actors – including within the UN and among non-government organisations – to devise whatever interventions they deemed fit and implement them without any government oversight,” he said.

“This led to what could be described as a culture of ‘humanitarian impunity’. Given how long those practices prevailed in Somalia and the weak coordination capacities of the newly reconstituted government, some of that culture still lingers on and at times makes it difficult to bring the humanitarian and development actors to work together along the nexus lines to achieve collective outcomes for the benefit of Somalis in need.”

The Gedo drought relief committee (GDRC), a group that supports people in the west of Jubaland – in southern Somalia – has raised nearly $200,000 and funded nearly 600 water trucks, as well as distributing food, according to a member who requested anonymity for security reasons. The GDRC has been able to get the water to areas controlled by al-Shabaab, places where neither the government nor international groups can safely go.

“We the committee can raise funds for the affected,” the member said. “When we have enough cash we contact well-known clan elders and they convince al-Shabaab they [the civilians] need assistance the most. So we send them the money and they buy water and report back.”

According to the GDRC, no international aid group has been near the people it has supported, although a member does recall that one assessment was conducted last year. “They come just in time to gauge the mortality rate,” said Adam Aw Hirsi, a former senior government official who is now on the national drought relief committee, set up in February.

It is difficult to show the GDRC at work because al-Shabaab does not allow the use of smartphones. A few photos have been smuggled out, one published here, of a child in the Balanbaal area, controlled by al-Shabaab.

International organisations are helping only the few who reach camps for internally displaced people (IDPs) in government-controlled areas, said the GDRC member.

“They are helping, but the question is, who do they have access to help? The plight caused by this drought is far greater than some few families gathered in an IDP camp. The people that really need assistance are those that are in hard-to-reach areas whose livestock have been depleted and have nothing left,” they said.

A failure to consult with people does not help, said Aw Hirsi. “The aid organisations failed to closely coordinate with the local actors on the ground and elsewhere. Close coordination will prevent a gap in aid allocation and delivery, and overlap in resources. Our committee has raised an alarm on both government and aid organisations’ shortcomings.” Drought relief money needs to go straight to “local hands-on actors” to have any impact, he said.

Politics also hampers relief efforts. The country is mired in an electoral struggle and there’s deep distrust between regions. Mursal Khalif, minister of international cooperation in Jubaland, has claimed that at least one plane loaded with humanitarian aid has not been allowed to leave Mogadishu.

Meanwhile Nadeef’s GoFundMe campaign in the US has raised more than $20,000. He has spent half on sending 70 water trucks across Jubaland, and half on food distribution.

The UN agency Unicef has not given a figure for how many water trucks it has sent out but says 110,000 of the 1.2 million people it has targeted have been reached. About 6.4 million people are in need of water and sanitation assistance. The agency says it needs $18m to meet its trucking target, and other support such as water supply systems and boreholes.

By Amanda Sperber in Kismayo