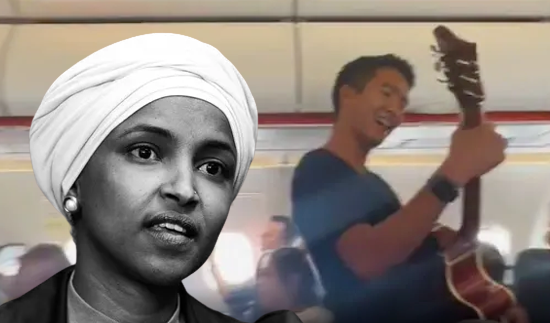 Lest you forget there is no limit to what sort of minor events can turn conservatives into writhing cesspools of rage: A handful of politicians have accused Representative Ilhan Omar of hating Christians after she pointed out the hypocrisy of a video showing Christian singers performing on a plane.

The video in question is captioned “Worshipping our King Jesus 30,000 feet in the air!” and shows a Christian group standing in the aisles singing worship music. As in many other cringey situations, an acoustic guitar is involved.

Omar, who is Muslim, generously skipped over the unpleasantness of this scene to point out how absurd it looks against the backdrop of her own experience expressing her faith while flying. “I think my family and I should have a prayer session next time I am on a plane,” she wrote on Twitter. “How do you think it will end?”

Of course, conservative politicians have responded to this subtle and correct observation about discriminatory airline practices with characteristic outrage. One congressional candidate in Georgia, Vernon Jones, accused Omar of hating Christians, writing, “If the freedom we enjoy here in America disturbs you, feel free to pack your bags and head back to Somalia, Sudan, or wherever you’re from.” Royce White, a Republican who’s running for Omar’s congressional seat in November, tweeted, “Don’t disrespect Christianity!” He at least seems to know where Omar is from, referencing the capital of Somalia, where she was born before emigrating to the U.S.: “Minneapolis will not become Mogadishu. We will not bend the knee.”

Omar’s comment has also reignited accusations of anti-Semitism, which first exploded in 2019 when Omar criticized American politicians’ allyship with pro-Israel lobbying groups. Republican and Democratic leadership both condemned the comment, and Omar apologized. That didn’t stop Cicely Davis, another GOP candidate running against Omar, from digging up the accusation. “Qatar — a country you’re very familiar with — plays Islamic prayers on the intercom before takeoff on their planes,” Davis wrote, seemingly under the impression that Omar is from Qatar. “The issue is you hate Christians & Jews & lots of Muslims.”

There’s no shortage of discrimination against Muslims in airports and on planes since 9/11, with Muslim travelers targeted for sending messages in Arabic, wearing a headscarf, or reading a book about Syria. That’s not counting all the times Omar herself has come under attack for her faith — in 2019, a man called her a “terrorist” and said that “somebody ought to put a bullet in her skull.” One of her colleagues, Republican politician Lauren Boebert, has publicly called Omar an “honorary member of Hamas” and a “terrorist sympathizer.”

Omar has a name of her own to call conservatives asking her why she hates Christians. She wrote later on Monday that “the original snowflakes had a complete and glorious meltdown” in response to her comments.