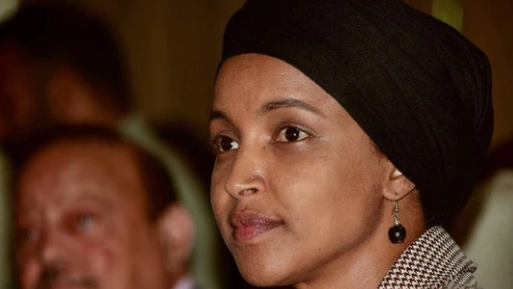 The Somalia-born US lawmaker is on a four-day visit to Pakistan, during which she has met Prime Minister Shehbaz Sharif and opposition leader Imran Khan. She held public and official interactions while visiting the LoC in PoK to assess the ground situation, according to Pakistani media reports.

India on Thursday criticised US Congresswoman Ilhan Omar’s visit to Pakistan-occupied Kashmir (PoK) as “condemnable” and accused her of violating the country’s sovereignty by travelling to a region illegally occupied by Pakistan.

The Somalia-born US lawmaker is on a four-day visit to Pakistan, during which she has met Prime Minister Shehbaz Sharif and opposition leader Imran Khan. She held public and official interactions while visiting the Line of Control (LoC) in PoK on Thursday to assess the ground situation, according to reports in the Pakistani media.

Asked about Omar’s trip to PoK at a regular weekly media briefing, external affairs ministry spokesperson Arindam Bagchi said, “We have noted that US representative Ilhan Omar has visited a part of the Indian union territory of Jammu and Kashmir that is currently illegally occupied by Pakistan.”

He added, “If such a politician wishes to practice her narrow-minded politics at home, that may be her business. But violating our territorial integrity and sovereignty in its pursuit makes it ours. This visit is condemnable.”

In 2018, Ilhan Omar and Rashida Tlaib became the first Muslim women elected to the US Congress. Omar’s visit to Pakistan has reportedly been arranged in her personal capacity as a member of Congress.

Omar visited PoK capital Muzaffarabad, where she said the US foreign affairs committee has held hearings on reports of human rights violations in Jammu and Kashmir and also discussed anti-Muslim rhetoric in India.

During his meeting with Omar on Wednesday, Pakistani premier Sharif highlighted the “serious human rights situation” in Kashmir and “stressed the importance of peaceful resolution of [the] Jammu and Kashmir dispute, enabling the region to realize its economic potential and promote social progress”, according to tweets from the Prime Minister’s Office.

Sharif also said a “peaceful and stable South Asian region can focus on its growth and development”, and called for concerted global efforts to deal with Islamophobia.

Ilhan Omar is the first American lawmaker to travel to Pakistan after the ouster of the Imran Khan government. Besides Sharif, she also met minister of state for foreign affairs Hina Rabbani Khar and National Assembly Speaker Raja Pervez Ashraf.

Omar’s meeting with former premier Imran Khan on Wednesday triggered a controversy as the cricketer-turned-politician has been accusing the US of being behind a “foreign conspiracy” to topple his government. Social media users reminded Khan of his criticism of political leaders who had recently met US officials and interior minister Rana Sanaullah asked if his meeting with Omar was “a conspiracy or interference”.

Earlier this month, Omar, a Democrat, asked why the Joe Biden administration was reluctant to criticise the Indian government on the issue of human rights. In the past, Omar has accused India of pursuing an “anti-Muslim” policy.