SomTribune
Home World News/International Politics/Diplomacy In this New Age of Empire, the West Has No Need to... 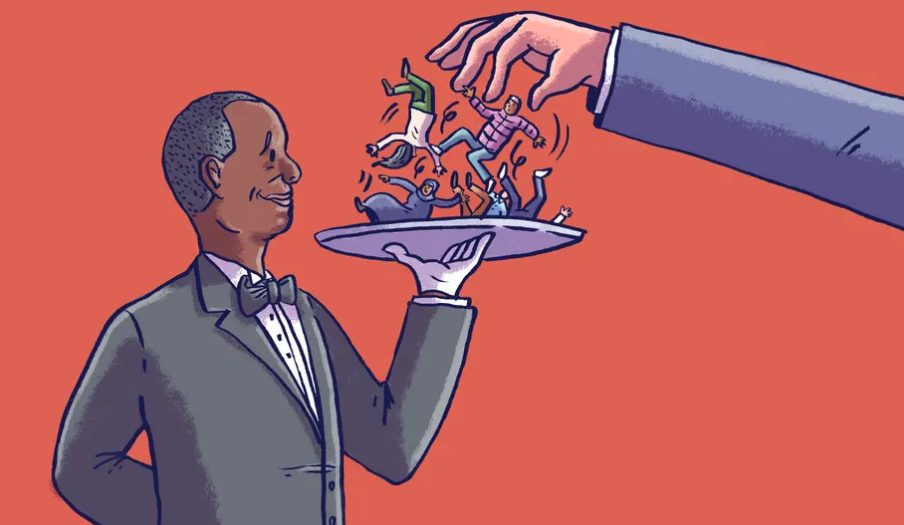 Where is America’s southern border? Look on a map and you can see the line where America ends and Mexico begins, a line along part of which Donald Trump tried to build his wall.

Justin Campbell will tell you that the maps are wrong, or at least disclose only half the story. He is a historian and former US soldier who served with Joint Task Force Six (now called Joint Task Force North). It is a military unit initially set up in 1989 to wage the “war on drugs”, then, after 9/11, to combat terrorism, too, and now also to stem migration.

America’s southern border, Campbell insists, does not simply lie on that line where the US meets Mexico. It lies also 1,500 miles to the south where Mexico meets Guatemala. Here, as at the US-Mexico border, there are American troops and border force police to monitor migrants coming through. Any who are thought to be heading for the US are immediately apprehended. The US border lies a thousand miles farther south, too, where Guatemala meets Honduras. Here, too, the US forces carry out operations to stop possible migrants to the United States.

“The US-Mexico, Mexico-Guatemala and Guatemala-Honduras borders,” Campbell told journalist Todd Miller for his book Empire of Borders, are all part of “a border set… where all borders face south… and try to prevent the same things going north”.

One can similarly ask: where is the European Union’s southern border? Just as the US border stretches into Central America and beyond, so the EU border extends further south than the Mediterranean coast of Spain, France, Italy, Malta and Greece, reaching out into Africa. The EU pays millions of euros to dictators and warlords, militias and criminal gangs in north Africa, the Sahel, and the Horn of Africa to act as immigration police, to hunt down and detain potential migrants to Europe. The EU’s former special representative for the Sahel, Ángel Losada, calls it “Europe’s new forward border”.

Why cannot Britain cope with any more asylum seekers – while Rwanda, per capita, already hosts five times as many?

Britain’s recent migration deal with Rwanda has generated much controversy. It is an obnoxious arrangement, not even a policy of offshore processing, but, rather, of mass deportation. The deal, however, did not emerge out of nothing. It is the latest move in what Alan Bersin, former commissioner of US Customs and Border Protection, calls a “massive paradigm change” in western perceptions of borders. For western governments, Bersin argues, borders are no longer lines to “demarcate… one sovereignty from another” but are seen, rather, as “movements – flows of people and goods on a global scale”.

Rich countries seek not to defend sovereignty at a line on the map but to manage those flows by extending sovereignty across the globe. As Miller details in his book, US troops and border police are to be found not just in Central America but in Ecuador and Kenya, Kazakhstan and the Philippines, stemming potential migration to America through a global operation.

There has in recent years been a fierce debate in the west about the “migration crisis” and how best to protect borders, defend sovereignty and insulate itself from that crisis. One of the ironies is that the protection of the borders of rich countries now requires them to trample all over the borders of poor countries. It is a new form of imperialism, in which immigration controls become the means of defending the sovereignty of rich nations through undermining that of poorer ones.

“Nonsense”, respond the defenders of the globalised immigration controls. “Poor countries may be poor but they are independent, capable of making their own decisions. Mexico is freely accepting US border police on its territory. Niger is voluntarily acting on behalf of the EU. Rwanda is willingly taking on more refugees.”

The nations of the world do not, though, all make decisions on equal terms. Mexico, Niger and Rwanda are sovereign nations but they don’t have much leeway when negotiating with the US or the EU or the UK, any more than when Amazon warehouse workers or P&O staff sign contracts promising pitiful wages and abysmal conditions, they do so truly out of choice. The market and the global economy can hide myriad forms of coercion behind the rhetoric of “free choice” and “sovereignty”.

The reason that Niger is “Europe’s migration laboratory” is that it is among the poorest countries in the world. It is also the largest per capita recipient of EU aid. In return for that aid, the Niger authorities have to shape domestic policies to fit the EU’s migration needs. So, Niger’s economy has become distorted and its citizens are prevented from travelling freely within their own country. The EU makes all aid conditional on support for its migration prevention policies. Niger signed a treaty with the EU, but its sovereignty was barely visible when it did so.Or take Rwanda. Ever since Britain signed the deportation deal, rightwing commentators, such as the Tory peer Daniel Hannan, have suddenly discovered their love of Rwanda as a “safe and prosperous country” and have condemned critics of the scheme as demonstrating “racist attitudes” and promoting “stereotypes about Africa”.

Rwanda has recovered remarkably well from the genocide of 1994 and has made huge economic strides. It remains, though, among the 25 poorest countries in the world. Britain’s per capita GDP is more than 50 times greater than Rwanda’s. Rwanda had every right to sign the deal. But let us not pretend that when Priti Patel and the Rwandan foreign minister, Vincent Biruta, met across the negotiating table, they did so as representatives of equal powers. Or ignore Rwanda’s human rights record or President Paul Kagame’s refusal to tolerate opposition. Or wonder why it is assumed that Britain cannot cope with any more asylum seekers but Rwanda, which already hosts five times as many refugees per capita as the UK, and with a population density almost twice as great, can do so.

Britain has the economic clout to transport its “problem” away and Rwanda’s government has both the economic need for the cash and the political desire, given its human rights image, to appear humanitarian. And, in the process, migrants are turned into commodities to be traded on the global stage, victims of a new imperialism in which immigration controls have become a means of dividing the world into rich, gated nations and poorer ones that take care of the west’s unwanted.