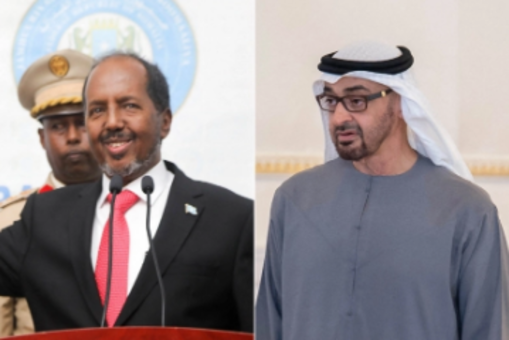 The day after his inauguration as president of the United Arab Emirates, Mohammed bin Zayed Al Nahyan landed himself a new ally in the Horn of Africa, where his influence has been growing to the detriment of Qatar

After the setback of 2017, this time round the United Arab Emirates has chosen to tread carefully in the Somali presidential race. Five years ago, the UAE bet everything on presidential candidate Omar Abdirashid Ali Sharmarke, who then withdrew despite qualifying for the second round. In this year’s 15 May election, it chose to back several candidates, which proved to be a winning strategy as the outgoing president Mohamed Abdullahi Mohamed, also known as Farmajo, was defeated after a three-round vote filled with suspense. And so it was an Emirates-backed candidate, Hassan Sheikh Mohamud, who this week settled back into Villa Somalia, the official residence of the Somali president, having first led the country between 2012 and 2017.

Fahad Yasin out of the picture

For the new UAE president Mohammed bin Zayed Al Nahyan (MbZ), the Somali election result is an important win in its decade-long battle against Qatar for influence in the region. For this election, Doha allegedly supported the former prime minister and presidential candidate Hassan Ali Khaire, and it has been a backer of Farmajo’s regime for the past five years. With this change at the top will come a major shake-up of the corridors of power in Somalia, and the former all-powerful intelligence chief and then security adviser to Farmajo, Fahad Yasin Haji Dahir (AI, 21/01/22), is likely to be the first casualty.

A former Al-Jazeera journalist who has often been described as the communication channel between Farmajo and his wealthy Qatari sponsor, he also knows Mohamud well, having been his campaign manager in 2012 and served as his go-between with Doha. But with Hassan Sheikh’s first election, Qatar failed to gain the influence it had expected in exchange for its support, and Fahad Yasin was gradually sidelined in favour of Mohamud’s former right-hand man Farah Sheikh Abdulkadir Mohamed.

That meant that for his 2022 campaign, Mohamud could not call on Qatar’s help. Presumably with help from Farmajo’s prime minister and rival, Mohamed Hussein Roble, the presidential hopeful then turned to MbZ, who hesitated for some time before offering his support.

Farmarjo’s departure has allowed some of his most fervent opponents to regain a foothold in Mogadishu, starting with the candidate who came third in the presidential election in Puntland, Said Abdullahi Deni, who is also politically backed by the UAE (AI, 13/05/22). After losing out in the second round, Deni offered his support to Mohamud as a means to bring down the outgoing president and perhaps pick up the prime minister’s seat for himself or one of his entourage.

The blurred lines of Somaliland and Djibouti

Abu Dhabi’s successful bet will allow MbZ to further expand his influence in the Horn of Africa, even if it means being somewhat inconsistent. The Emirates is on excellent terms with Somaliland, which has self- proclaimed its independence from the rest of Somalia and where the giant Dubai Ports World (DP World) operates and develops the port of Berbera. Recognition of Somaliland as a sovereign state is a highly contentious issue in Somalia. During his first term, relations between Mohamud and the former Somaliland President Ahmed Mohamed Mohamoud, known as “Silanyo” (2012-2017), were abysmal. He was, however, much more open towards Silanyo’s successor, Muse Bihi Abdi, mostly out of a desire to destabilise Farmajo. How he will handle relations with Somaliland is therefore still uncertain.

The situation with Djibouti is also muddled. President Ismail Omar Guelleh was among the first heads of state to welcome Mahmoud’s return to office in Mogadishu. The two leaders get along well. But the Djibouti government has been at loggerheads with Mohamud’s new sponsor, the UAE, since 2014 when it cancelled DP World’s concession for the Doraleh port container terminal.

The Djibouti president’s relations with the Ethiopian prime minister Abiy Ahmed Ali are frosty, and reminiscent of a cold war with his other neighbour, Eritrean President Isaias Afwerki. Both Abiy and Afwerki are strong allies of the Emirates. For a long time, Eritrea hosted an Emirati military base in the port of Assab which was used in the Saudi-Emirati coalition’s war against Houthi rebels in Yemen.

The UAE left Assab in February 2021. It had been increasingly suspected of military interference in the conflict of the Ethiopian federal government and the Eritrean armed forces with the insurgent Tigray Defense Forces (TDF) coalition in northern Ethiopia. The TDF is led by the Tigray People’s Liberation Front, the party that ruled Ethiopia from 1991 to 2018, and with whom Mohamud’s ties go a long way back.