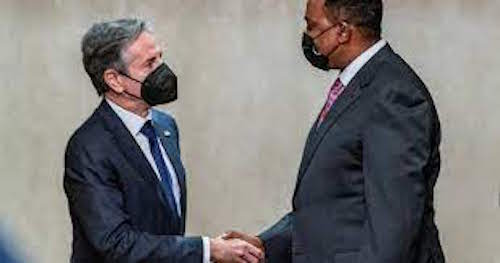 The dialogues in the Horn of Africa inspire little confidence to resolve the region’s crises while U.S. diplomatic efforts seem insufficient in an area of strategic interest.

It’s a matter of conventional wisdom that the crises gripping the Horn of Africa are fundamentally political, and that viable, sustainable solutions can be found only through inclusive political dialogue. But in both Sudan and Ethiopia, current dialogues—one internationally backed and one a domestic project—inspire little confidence. The United States has real interests at stake in the region that are ill-served by relying on these processes to stabilize these two fragile countries.

In Sudan, where a more just and accountable political dispensation has been a U.S. priority for decades, the administration seems determined to defer to the United Nations (UN)-African Union (AU)-Intergovernmental Authority on Development (IGAD) tripartite mechanism, which the State Department recently described as “the most inclusive mechanism to achieve an urgently needed agreement” on a way forward in Sudan. But urgency does not appear to characterize the process that has prompted no meaningful change in political power dynamics in Sudan since the military coup of October 2021. The junta is still in charge, is still violently repressing pro-democracy protestors, and has even felt free to threaten multilateral negotiators. Insecurity has worsened in Darfur. Rumors abound of rifts between the UN and AU facilitators, important civilian actors have been reluctant to engage in political dialogue in an atmosphere of violent repression, and plans for direct talks among the Sudanese actors have been postponed. Playing a supporting role makes sense when an effective process is delivering results.  It’s hard to argue that is the case in Sudan. The Unites States cannot impose a political settlement on the Sudanese people. But perhaps policymakers should be willing to get caught trying to establish some clear redlines for those currently wielding power, articulate reasonable conditions that should enable all relevant parties to participate in a dialogue process that has some integrity, and clarify both how the U.S. will lead an effort to isolate those who impede a genuine civilian-led transition, and how it will provide concrete financial support to a Sudan engaged in a viable transitional process.

In Ethiopia, critics maintain that the National Dialogue Commission, created to address divergent viewpoints on “the most fundamental national issues” and to “engender national consensus”, is insufficiently inclusive to win the trust and credibility of the country’s diverse population. The backdrop of the unresolved war in Tigray and ongoing civil unrest elsewhere in the country raises questions about authorities’ overall commitment to resolving disputes through dialogue and compromise. Moreover, the government’s arrest of Ethiopian journalists and expulsion of international correspondents indicates an intolerance for free expression, and even for acknowledging facts, that is antithetical to any serious political dialogue. The United States is right to continue to focus on grossly inadequate humanitarian access in Tigray, but also needs a strategy to address the broader powder keg of an Ethiopian state rife with ethnically-affiliated militia forces, historical grievances, and disputes over access to resources and opportunities. Again, this is not a case in which the United States can or should impose solutions. But given the potential costs of state collapse in Ethiopia, the United States cannot afford to ignore the trendlines headed in the wrong direction, and should carefully consider the signals sent by financial support for recovery in areas where conflict persists and underlying causes remain unaddressed.

When the United States named a special envoy for the Horn of Africa over a year ago, Secretary of State Blinken explicitly stated that the appointment “underscores the Administration’s commitment to lead an international diplomatic effort” to address interlinked crises in the region. Thirteen months and two envoys later, it is fair to question whether that commitment to leadership persists, particularly in Sudan. Meanwhile, the political dialogues underway in Ethiopia and Sudan inspire little confidence that the region is climbing out of crisis toward the peace and prosperity the United States wishes to promote.