Food insecurity will worsen in 20 “hunger hotspots” this year through a combination of rising conflict and climate change, putting a record 49mn people in 46 countries at risk of famine, key UN food agencies forecast.

Some 750,000 people were already experiencing “catastrophic” famine including starvation and acute malnutrition in Ethiopia, Afghanistan, Somalia, South Sudan and Yemen, the World Food Programme and the UN Food and Agriculture Organization said in the latest report. “Climate shocks will continue to drive acute hunger in the outlook period from June to September 2022 and we have entered a ‘new normal’ where frequent and recurring droughts, flooding, hurricanes and cyclones decimate farming, drive displacement and push millions to the brink in countries across the world,” the report said.

Conflict and organised violence were the main sources of food insecurity in Africa and the Middle East, specifically in northern Nigeria, central Sahel, eastern Democratic Republic of Congo, Ethiopia, Somalia, South Sudan, Yemen and Syria. The war in Ukraine has also exacerbated the food crisis by driving up the price of agricultural commodities. Russia and Ukraine together account for around 30 per cent of the global wheat trade. New countries added to the “hotspot” list include Ukraine, Sri Lanka, Zimbabwe, Benin, Guinea and Cabo Verde.

La Niña, a climate pattern that changes ocean surface currents and brings cooler water up from the depths of the Pacific Ocean, has also exacerbated weather conditions.

The phenomenon has been present since late 2020 in a “twin” seasonal occurrence that has brought severe floods and below-average temperatures to Australia and drier than usual conditions to Africa. This has contributed to food shortages in some areas, including Afghanistan and eastern Africa.

Scientists are monitoring temperatures to determine whether the conditions are in place for a “triple-dip” La Niña, affecting a third season.

In Afghanistan, below-average harvests and the dire economic situation after the national upheaval last year has caused acute levels of hunger. In the central Ghor province, 20,000 people face catastrophic conditions due to limited humanitarian access. The FAO-WFP projects acute food insecurity numbers in the country to increase by 60 per cent from last year. 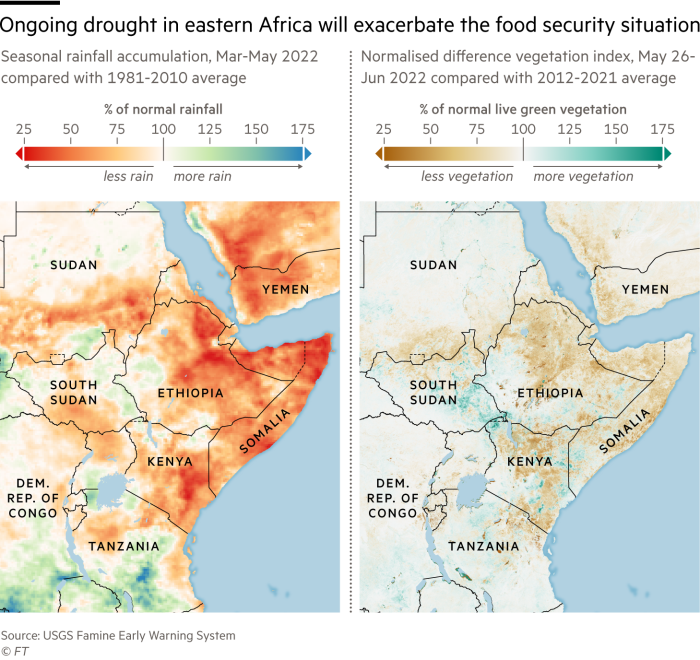 A drought alert for the Horn of Africa in April noted that rainfall across most of the region was not sufficient for planting crops. Some areas are experiencing an unprecedented fourth consecutive drought since late 2020, worsening food security in the arid and semi-arid parts of Kenya, southern and eastern Ethiopia. More than a million livestock have perished in Ethiopia’s south-eastern Somali region alone.

Domestic food prices are approaching levels seen during the 2011 famine and are expected to continue rising, compounded by the reliance on disrupted wheat imports. The 2011 famine is thought to have killed a quarter of a million people.

“Somalia is facing famine conditions as a perfect storm of poor rain, skyrocketing food prices and huge funding shortfalls leaves almost 40% of Somalis on the brink, a joint FOA-OCHA-Unicef-WFP statement has warned.

By Leslie Hook and Chris Campbell