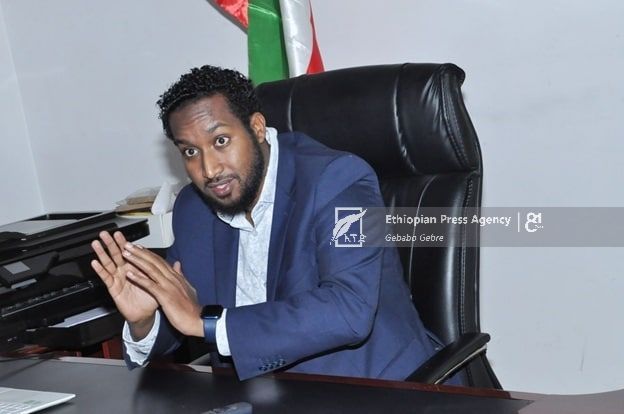 It is pertinent to note that the bilateral relations of the Federal Democratic Republic of Ethiopia and Somaliland in terms of political, economic, and trade ties have been progressing along the right lines more than ever before.

As things stand at present, Somaliland is metamorphosing with great success into an important hub of trade on account of its geopolitical location in the Horn of Africa.

Of late, The Ethiopian Herald had sat down with Ambassador of Somaliland to the Federal Democratic Republic of Ethiopia Mohamed Ahmed Mohamoud (Awad), intending to bring to light the existing bilateral relations between the two nations as the Ambassador touched upon many issues revolving around the trade relations of the two nations, such as the Port of Berbera, peace, security, and other things of a similar kind. Ambassador Awad has been in the position for the past eleven months, and earlier, he was the former Minister of Investment and Development in Somaliland.

The Ambassador is committed to taking the relations of the two nations to a higher level in connection with people-to-people, government-to-government, and other areas of cooperation sooner rather than later. In the general run, he emphasized the need to improve the relations between the two nations by any means whatsoever.

What is your reflection on the relations between Ethiopia and Somaliland?

Somaliland has been moving forward in the right direction by entering into bilateral and multilateral deals with various nations. In consideration of the foregoing, many regional states and the broader international community bear witness to the democratic credential and tranquility unfolding in the country.

On the heels of our commitment and hard work, the relations between Ethiopia and Somaliland have been moving forward along the right lines. As Ethiopia is a strong ally of Somaliland in significant aspects of development, we have been progressing in the right direction to take the two nations in every part of growth to a higher standard.

Amongst other things, it would not be an exaggeration to say Ethiopia is a firm companion of Somaliland in major growth aspects. Needless to say, all Somalilanders irrespective of age and gender, know the reality on the ground like the back of their hand.

Apart from emphasizing living in peace and coexistence with surrounding countries, we have good working relations and collaboration with a diverse range of nations in the Horn of Africa and beyond. Unlike other nations in the vicinity, there have never been pirates in the sea of Somaliland.

Speaking honestly, what the two nations have been sharing in common cannot be expressed in a few words. They are beyond words. To my knowledge, we are interdependent regarding trade, people-to-people, culture, and other major economic issues. By way of illustration, we have something the government of Ethiopia and the people of Ethiopia needs. Alternatively stated, what Ethiopia possesses is something that we necessitate.

When it comes to trade, scholarship, medicine, and other related issues, the first choice of Somalilanders is, without a second thought to go to Addis Ababa at the earliest possible time. To cut a long story short, the relations between the two nations are rich, deep, and intense. While on the subject, let me make one thing perfectly clear—nobody can set apart Ethiopia and the Port of Berbera by any means whatsoever.

It is rumored that the federal democratic republic of Ethiopia and Somaliland concerning the port of Berbera is in the doldrums. What’s your say on this?

As Ethiopia is an overpopulated country and one port is not an adequate amount, it needs more than ten ports beyond the shadow of a doubt. I think Ethiopia is one of the fastest growing economies globally, and its population will reach two hundred million within ten or twenty years.

It is worth mentioning that before the law enforcement operation was put into effect in the northern part of the country, Ethiopia was experiencing double-digit growth.

Coming back to the point, we have been in the present climate attaining the sought-after goal as per the fact that the Port of Berbera has been developed magnificently. Speaking of which, as it is one of the world-class ports that add extra sea outlet to Ethiopia, it plays a paramount role in mushrooming the import-export business, creating employment chances, and smoothing the progress of the two nations to play a part in balanced trade.

In the present climate, almost 95 percent of the Berbera corridor has been accomplished. It is expected to serve multiple functions and play an indispensable role in boosting regional economic ties. Ethiopian people can go wherever they think is competitive in Somaliland. We are ready to serve Ethiopians in various ways. Our tariff is very competitive. I have invited a lot of Ethiopians to Somaliland, and they are amazed by everything they have seen there.

Our people are amiable like that of Ethiopia. I would even go so far as to say there are gaps to be bridged regarding people-to-people relations between the two nations.

How would you describe Somaliland in terms of peace and tranquility?

To start with, Somaliland is a democratic country. We always have a very decent power transition. I would go further and say we have reached to unattainable level in the context of giving rise to peace and security in every nook and cranny of Somaliland. For example, suppose one goes to Western countries. In that case, everything on the subject of theft and other criminal offenses act is monitored by CCTV cameras. But when one comes to Somaliland, one cannot find CCTV cameras and police officers controlling theft.

What should be done to take the relations between the two nations to a higher level?

There can be no doubt that Ethiopia is our neighbor. They are brotherly people. As we are in a good relationship with Ethiopia, we are progressing in the right direction.

In the same way, the two nations have trade, traditional, cultural, historical, and people-to-people relations. I understand that we are Ethiopia’s foremost companion in the context of trade and security.

As long as the relations between Ethiopia and Somaliland are robust, we need to lay stress on people-to-people links bringing into play quite a lot of fruitful approaches that can take the two nations to the next level. The people of Somaliland are keen to be part and parcel of Ethiopia’s development. Some signals show Ethiopia will grow fast over time, without a doubt.

What are the areas in which Ethiopia and Somaliland can work together for a common cause?

Although the two nations possess a vast number of resources, they are underdeveloped yet, but there are areas in which we can cooperate. For instance, regarding industrial parks, Ethiopia has a lot of experience, but Somaliland does not have that kind of involvement. When it comes to athletics, Ethiopians are good runners who know the nuts and bolts of the discipline that help them achieve the desired goal on the world stage. On the basis thereof, the facts as mentioned above would be some of the areas in which we can cooperate.

The other thing is rather than using only ships all the way, why don’t we develop our port? If we sit down and think, we have much to offer to other African countries and beyond. The two nations’ leaders can go a long way and beyond to buttress a diversity of common goals.