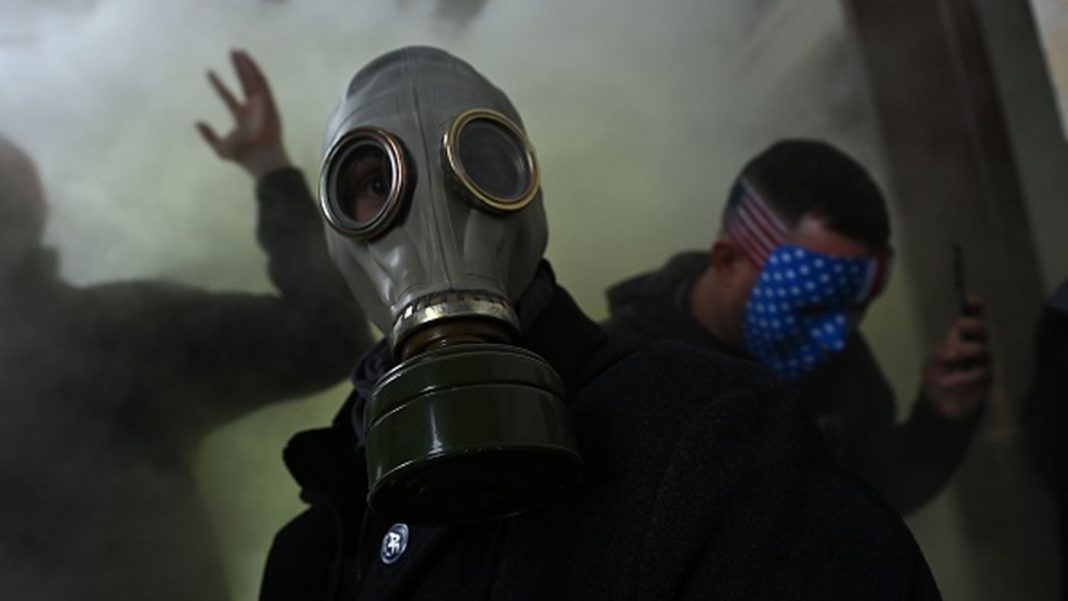 Chinese president Xi Jinping is expected to visit Saudi Arabia, Martin Chulov reported. Plans are underway for a gala reception for Xi next week to match that given to former President Donald Trump on his first trip abroad as president: “China made no public comment about Saudi Arabia’s invasion of Yemen, its boycott of Qatar, or the murder of dissident, Jamal Khashoggi, which led to strong condemnation in the U.S. and Europe.”

There are fragile democracies everywhere one looks today. Here’s a run-down.

TAIWAN — CHINA ISSUES NEW WHITE PAPER: This is the third policy paper issued by Beijing on Taiwan since 1992. (English language version here.) The first sentence: “Taiwan Is Part of China – This Is an Indisputable Fact,” and the paper goes on to assert that China’s “national rejuvenation is driven by an unstoppable force.” As Speaker Nancy Pelosi said during her recent visit to Taipei: “Whatever China was going to do, they’ll do in their own good time.”

How China is outmuscling Taiwan among Washington media: Taipei has survived in Washington with a cautious public messaging strategy for years. There’s no “wolf warrior” reaction or flooding the zone when China acts out. You have probably never heard of Taiwan’s de facto Ambassador Bi-Khim Hsiao, and maybe that’s not necessary for Taiwan to survive and thrive. But will this low-key approach still work if Chinese Ambassador Qin Yang is going all-in to make sure Beijing’s messages are heard from Georgetown dinner parties to CNN to the global conference circuit? Phelim Kine investigates.

A warning from Berlin: We passed the first half of 2022 marveling at Germany’s dependence on Russia, and how that shaped European policy-making for decades. The German economy’s dependence on China is even greater, writes POLITICO’s chief Europe correspondent Matthew Karnitschnig.

Chancellor Olaf Scholz on Thursday dodged questions about whether Berlin would sanction Beijing in the event of a Taiwan invasion. Norbert Röttgen, a former minister and longtime chair of the German parliament’s foreign policy committee, is more direct: He calls the China relationship “a dependency that leaves us helpless,” and doubts sanctions would be possible.

Baltics stand up to China: Estonia and Latvia have followed Lithuania’s lead, and left a club China set up for engagement between Beijing and Central and Eastern European capitals.

ITALY — MELONI SAYS SHE’S NOT FASCIST, JUST A REPUBLICAN: Italy’s most likely next prime minister, Giorgia Meloni, who leads the Brothers of Italy party, which has fascist roots, has pushed back on the comparison. In a video message in French, Spanish and English, she said she’s simply a conservative and “shares values and experiences with the British Tories, the U.S. Republicans and the Israeli Likud.”

KENYA — RUTO WINS, MAYBE: The Kenyan Electoral Commission warns its audience to verify election results before sharing, but it’s anyone’s guess where those results are. The official count shows less than 1.5 percent of votes counted, though the Commission said it has received 99 percent of reports from polling stations.

You can’t find the results yet on the Commission’s website, but Google will tell you Deputy President William Rutois leading Raila Odinga and other candidates with 52 percent of the vote.

First vote-rigging claim: “Late on Thursday, the chairman of (President Uhuru) Kenyatta‘s Jubilee party, which has backed Odinga, issued a statement alleging “massive subtle rigging” and claiming the “electoral process was highly compromised” after Ruto’s new party made a strong showing in an area traditionally dominated by Kenyatta,” Reuters reported.

But the IRI/NDI statement noted “concerns about last minute changes to the Election Day procedures, and about the security and timeliness of the transmission and announcement of results.” The mission was co-led by Joaquim Chissano, former president of Mozambique; and included Donna Brazile, an NDI board member and Randy Scheunemann, IRI board vice chair.

BRAZIL — TENSIONS RISE WITH BOLSONARO BEHIND AND SPREADING CONSPIRACY: Former President Luiz Inacio Lula da Silva leads in opinion polls, sometimes by double digits. But that has many Brazilians worried — leading to a massive public protest in defense of democracy. That’s because President Jair Bolsonaro has said repeatedly he won’t go (he has claimed “only God will remove me”), even if he loses the Oct. 2 vote.

A loss for Bolsonaro may also mean criminal charges for his shambolic handling of the Covid-19 outbreak in his country, which health specialists agree contributed to the country’s high death toll of 681,000.

Sen. Bernie Sanders (I-Vt.) plans to introduce a resolution once Congress returns from its August recess, to call on the U.S. to break ties with Brazil if it’s led by an illegitimate regime. “It would be unacceptable for the United States to recognize and work with a government that actually lost the election,” Sanders told my colleague Alex Ward. He underscored that if Bolsonaro, Lula or someone else wins the presidency lawfully, then there’s no need for a change in the U.S.-Brazil relationship.

The judge who signed the search warrant of Trump’s Mar-a-Lago mansion is facing death threats. Christopher Wray, head of the FBI, described escalating threats of violence against his and other law enforcement officials as “deplorable and dangerous.” An armed man accused of trying to break into the FBI’s Cincinnati office on Thursday morning exchanged gunfire with law enforcement officers, entered an hours-long stand-off, and was eventually shot and killed by the Ohio State Highway Patrol.

Conspiracy, everywhere: “Go to a gun show. Visit a right-wing church. Check out a Trump rally. No matter the venue, the doomsday prophesying is ubiquitous — and scary,” writes long-time GOP-watcher Tim Alberta.

These audiences believe in plots to sabotage a second Trump campaign to steal a second election (2024) from them, after the supposed theft of the 2020 election.

Some congressional GOP voices are fermenting this conspiracy-driven worldview. “No one is safe from political punishment in Joe Biden’s America,” the House GOP Judiciary Committee team tweeted this week.

The idea that every arm of government is out to get you, is an extraordinary message from a major political party. Tax collectors at the IRS are not the second incarnation of Stalin — but brutal political point-scoring against them can turn into a cover for political violence.

Cheney 2024: All signs suggest Cheney is working to turn a likely congressional primary defeat on Tuesday into a 2024 presidential run, writes John Harris. She’s cashed up with Democrat and Never Trumper money, not exactly denying her interest, and rhetorically ready to wreck Trump’s 2024 chances.

Another form of political violence takes place every day in America’s prisons, often directed at Black men. On Thursday in Geneva, the United Nations Committee on the Elimination of Racial Discrimination began hearings on whether the U.S. is complying with its international treaty obligations in prisons.

A panel led by South African, Jamaican and German delegates is questioning U.S. officials for the first time since 2014 (the Trump administration refused to show up), and there’s plenty of tension in the U.S. delegation, civil society members of that delegation told Global Insider.

The NGOs tore into administration officials at an internal consultation in Geneva on Wednesday — angry at what they feel is cursory consultation and the State Department presenting an inaccurate representation of problems in American prisons.

The U.S. delegation is led by Desirée Cormier Smith (the State Department’s Special Representative for Racial Equity and Justice) and Michèle Taylor (U.S. Permanent Representative to the U.N. Human Rights Council) and includes figures such as the Mayor of Atlanta, Andre Dickens.

The Southern Poverty Law Center presented a report from a coalition of NGOs to the U.N. investigators, highlighting repeated failures in American state prisons to meet the U.N.’s Standard Minimum Rules on treatment of incarcerated people, and the impact on Black populations, who are five times more likely to be incarcerated in those prisons.

Walk versus talk: “Anyone who works in the international advocacy space has to be accepting of incrementalism. You hope to chip away at things,” Borden said. “But President Biden has made a pretty big deal about his intention to return the United States to a position of leadership on human rights. Unfortunately, although I do believe that the Biden administration’s intentions are good, there’s been a lot of talk and not a lot of walk.”

Where’s the Treasury? “In Alabama, right now, the governor and state legislature are planning to use hundreds of millions of dollars in COVID relief funds to build new prisons. This is the kind of thing that the Treasury Department could prevent. They don’t need Congress. They don’t need the DOJ, they don’t need the Supreme Court. There’s regulatory and executive steps that could be taken to prevent that.”

LEGISLATING FOR CARBON TRADING: India’s lower house of parliament passed a landmark energy bill on Wednesday. There would be renewable energy requirements for businesses in addition to a carbon trading system.

WAR PRACTICE IN THE HIMALAYAS: The U.S. and India will conduct high-altitude combat training from Oct. 18-31, in the state of Uttarakhand bordering Tibet, Nikkei reported. Coming on the heels of China’s Taiwan intimidation, the location is unlikely to be a coincidence.