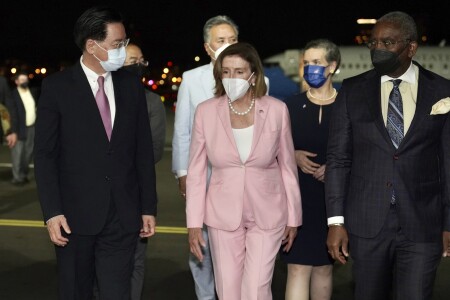 House Speaker Nancy Pelosi, (D-CA), defied White House wishes to visit Taiwan. Arriving on the island, she declared , “The world faces a choice between democracy and autocracy.” Pelosi was right to go . Taiwan is America’s 11th largest trading partner and a thriving democracy. China sabre rattles and seeks to crush Taiwan as it did Hong Kong because Taiwan’s democracy and freedom show mainland Chinese that they need not sacrifice liberty for development.

Pelosi’s visit was important for another reason: It reminded the White House that Congress is a co-equal branch of government. When White House priorities are skewed and when the State Department is sclerotic, prominent Senators and Representatives are correct to jumpstart a debate about what a proper U.S. foreign policy should be. On China, at least, Pelosi has been consistent and willing to stand up both to Republican and Democratic administrations. The only unfortunate aspect of Pelosi’s trip was that she did not include Republicans in her delegation. True bipartisanship would have greatly amplified her message, especially in the face of Beijing’s challenge.

Taiwan is not the only democracy threatened by revanchist neighbors and dictatorships, however. Now that Pelosi has reasserted the power of her perch, she might consider other trips to refocus American policy in favor of freedom and liberty.

Consider Somaliland: Briefly independent in 1960, the country entered into a failed marriage to form Somalia but then broke away as Somalia descended into dictatorship and state failure. Somaliland is the only democracy in the Horn of Africa, with some elections decided by less than 100 votes out of more than a million cast. It was the first country in the world to secure election registration with biometric iris scans. Whereas the State Department once respected Somaliland’s de facto autonomy, in recent years, first Ambassador Donald Yamamoto and then his successor Larry André, have deferred to Somalia’s bluster and populism. Just as Beijing manufactures a crisis over Taiwan to distract from President Xi Jinping’s mismanagement of the Chinese economy, so too does Mogadishu whip up anti-Somaliland sentiment to distract from Somalia’s sorry situation.

The issue, however, is not just support for Somaliland’s democracy. The world has dozens of democracies, all of which deserve more support. In Somaliland, there is also a strategic imperative. The position of the U.S. military base in neighboring Djibouti is tenuous as China tightens its grip over that country, but the Somaliland port of Berbera is a turnkey alternative. That Somaliland allies with Taiwan is a bonus. U.S. Africa Command, the intelligence community, and many in Congress seek a formal relationship with Somaliland, but the State Department resists for reasons arcane and increasingly contrary to U.S. interests. For Pelosi to visit Hargeisa and Berbera — cities safe enough to walk around with security — would further American interests and remind the State Department that Congress makes American policy, not Mogadishu.

Another analogous situation is Artsakh, the unrecognized state formed in Nagorno-Karabakh by that region’s Armenian population. While Artsakh is democratic and Nagorno-Karabakh’s history as a polity long predates Azerbaijan’s, Azerbaijani President Ilham Aliyev who increasingly channels his inner Xi, seeks to overrun the entity . Aliyev likely would not stop there, however. Just as Saddam Hussein once talked about Kuwait, so too does Aliyev speak about all of Armenia. Azerbaijan also increasingly pivots to Russia , even as it tries through its caviar diplomacy to maintain a moderate, pro-Western image. Pelosi has always sought to acknowledge and honor Armenian history. She should visit the Armenian Genocide Memorial in Yerevan and then take a helicopter to Artsakh’s capital Stepanakert to signal that the United States will not allow renewed genocide on her watch. Azerbaijan might bluster, but it will not shoot down the Speaker’s flight any more than China would.

Kudos to Pelosi on her Taiwan trip. Let’s hope she and her colleagues on both sides of the aisle make it her first rather than final step.