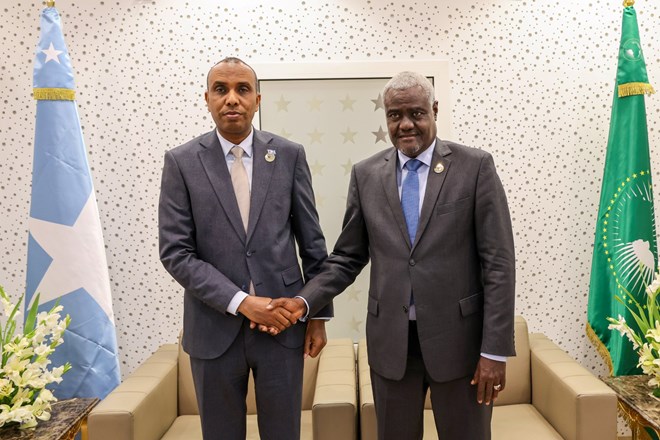 Mogadishu – Somali Prime Minister Hamza Abdi Barre met with the chairperson of the African Union Commission, Moussa Faki Mahamat, in Tunis on Sunday, where they discussed the relationship and cooperation between Somalia and the African Union.

Last April, the chairperson of the commission of the African Union, Moussa Faki Mahamat, expressed concern about the decision by the former Somali Prime Minister over the expulsion of the AU envoy to Somalia, Ambassador Francisco Madeira.

Roble accused Madeira of engaging in acts incompatible with his diplomatic status.

However, Ambassador Madiera has not worked in the country since then, and the African Union has not replaced him.

Somalia’s new Prime Minister Hamza Abdi Barre, who is attending the Tokyo International Conference on African Development (TICAD) in Tunis, said during his speech that security and stability are non-negotiable to reach social development and economic self-sufficiency.

During his stay in Tunis, he also met with the Minister of Foreign Affairs of Japan, Yoshimasa Hayashi and the Prime Minister of the Republic of Djibouti, Mr. Abdoulkader Kamil Mohamed, on the sidelines of the Tokyo International Conference on African Development (TICAD).