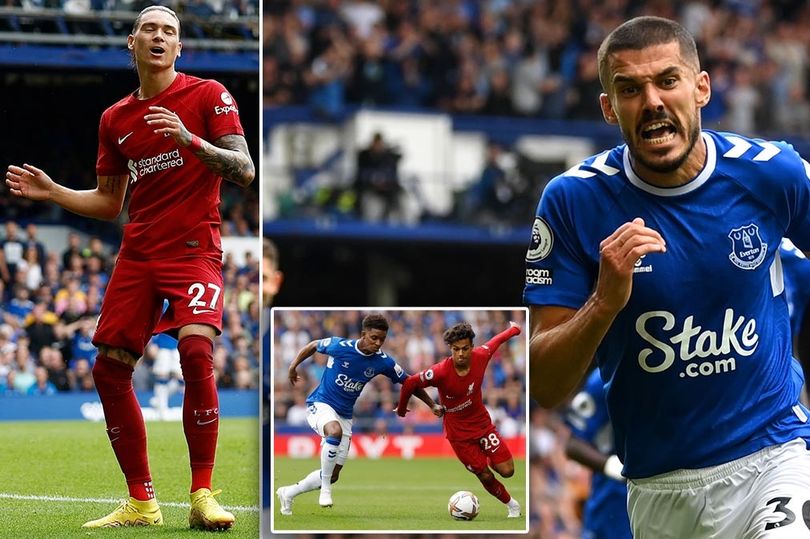 Liverpool continued their winless start on the road this season as they were held to a 0-0 draw with Everton in the Merseyside derby on Saturday afternoon.

In a frantic encounter at Goodison Park, both sides had chances to win the game but were denied by two world-class performances from Jordan Pickford and Alisson, who were superb on the day.

Ex-Red Conor Coady saw a goal ruled out by VAR midway through the second-half, after Neal Maupay squandered the best chance of the game. Liverpool created more opportunities but were unable to beat Pickford, who won the Player of the Match award for his efforts.

Here are six talking points from a pulsating encounter in the North West.

Liverpool’s pursuit of another title charge took another hit with two more dropped points. It’s the third draw they’ve had already this season, having already been held against Fulham and Crystal Palace.

They could be seven points behind Manchester City by the end of the weekend if Pep Guardiola’s side manage to beat Aston Villa in the late kick-off. That is a huge margin after just six matches, with Arsenal, who are the only side to win all of their games to date, playing on Sunday against Manchester United.

Jordan Pickford and Allisson stole the show as the goalkeeping duo made a number of world-class saves throughout the game. The Everton shot-stopper, in particular, was outstanding at the start of the second-half to deny Firmino on two occasions and Fabinho’s effort that took a deflection off Coady.

It was then Alisson’s turn to produce an excellent stop as he denied Neal Maupay from point blank range after a rapid Toffees counter-attack. Meanwhile, Pickford waited until the 95th minute to produce his best stop as he tipped Mohamed Salah’s goalbound effort onto the post.

The Toffees lined-up with a 4-3-3 formation, rather than their usual three at the back shape. This meant Conor Coady and James Tarkowski were used as the two centre-backs, with Michael Keane dropping to the bench. Neal Maupay was handed his first Everton start and led the line, with Anthony Gordon out wide.

They looked a lot more dominant in midfield, especially in the first-half. Tom Davies looks a player reborn since the start of the season and performed superbly. He almost gave Everton the lead in the first-half but his effort struck the post and rolled to safety.

It was a mightily impressive performance from Everton as they created chances and looked good out of possession, too. Although they haven’t won a game yet, drawing four of their opening six matches, it was a display to build on moving forward.

After missing the last three matches through suspension, Darwin Nunez was thrown straight back into the starting XI for the trip to Everton. Roberto Firmino, who scored against Newcastle and twice in the 9-0 rout over Bournemouth, was named on the bench and Jurgen Klopp revealed the reason behind the change. He said: “Bobby is in top shape but came back from injury and played a lot. Darwin is fresh. That is the reason for the change.”

Nunez cut a frustrated figure throughout the majority of the first-half, but came close to opening the scoring just before the break. The Uruguayan latched onto a long ball over the top, before unleashing a powerful volley that struck the top of the bar via a deflection and a smart save from Jordan Pickford. In the second-half, Nunez had a couple of half chances but wasn’t able to effect the game as much as he would’ve hoped.

Liverpool have had rotten luck in recent weeks with injuries and it continued in the Merseyside derby when Fabio Carvalho was taken off at half-time. The 20-year-old was struggling with a knock after a heavy challenge from Onana and couldn’t continue, with Firmino coming on in his place.

The extent of the injury is unknown at this stage, but Carvalho could join a number of Liverpool midfielders out injured. Jordan Henderson, Naby Keita, Thiago and Alex Oxlade-Chamberlain are all absent at the moment – a crisis that forced Klopp to sign Arthur Melo from Juventus on deadline day.

A round of applause was heard around Goodison Park in the ninth minute in memory of Olivia Pratt-Korbel. The nine-year-old was residing inside her home in Kingsheath Avenue in Dovecot on Monday, August 22 when a gunman barged into the Pratt-Korbel’s family home and opened fire, hitting Olivia’s mum Cheryl. Olivia was taken to Alder Hey Children’s Hospital, where she later died.

The two sets of supporters took part in a minute’s applause, while also signing “Merseyside” as they all united after the death of Pratt-Korbel in their own city, with a picture of the girl shown on the big screen. It was a touching moment and showed how football can come together in tough times.