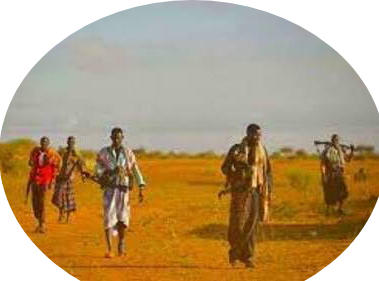 Somalia’s president, Hassan Sheikh Mohamud is in his final quest for government victory against the al-Qaeda-affiliated militant group al-Shabaab in the country.

President Mohamud instructed his security and defence ministers to mobilise local militias in various regions.
President Hassan Sheikh Mohamud and his prime minister, Hamza Barre have asked the security minister, Mohamed Sheikh Doodishe and the defence minister, Abdukadir Mohamed to accelerate a new strategy to fight al-Shabaab insurgency through clan militias in various regions in the country.
“The new approach tends to put militias on the frontline in Hiiraan, Galgaduud, Gedo and Bakool regions and it involves mobilising – and possibly arming – clan militia. This will increase successes and might lower the casualties,” said a senior government advisor who spoke to Horn Observer on condition of anonymity.
According to insiders, the new approach to use local clan militias was influenced by the recent fight in Hiiraan region where local militias containing herders and farmers overpowered al-Shabaab in several localities in Hiiraan. In June, Saleban/Habargedir clan militia fought and destroyed al-Shabaab power in Baxdo town in Galmudug.
But many risks lie ahead if the untrained militias are not well coordinated and without an exit strategy after their use for the insurgency fight.
Horn Observer