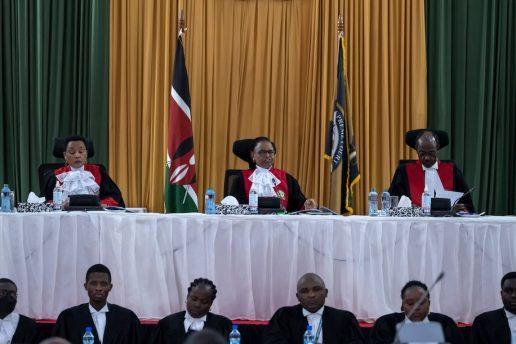 Kenya’s Supreme Court on Monday upheld the election of William Ruto as the country’s president-elect in a unanimous ruling that sharply rejected arguments made by opposition candidate Raila Odinga and his supporters, who had sought to overturn the election results.

The verdict marks a likely final blow to the presidential ambitions of Odinga, a 77-year-old veteran opposition leader, and means that Ruto, 55, the country’s populist deputy president, will in coming weeks be inaugurated. In an opinion read by Chief Justice Martha Koome, the court lambasted allegations made by Odinga’s legal team as “just another red herring” and “hearsay.”

Odinga, who was on his fifth bid for the presidency, had personally delivered boxes of evidence to court following Ruto’s narrow victory in the Aug. 9 election.

In a statement Monday afternoon, Odinga said he found it “incredible” that judges had ruled against his petition on each of the nine counts raised, using language he described as “unduly exaggerated.”

“We respect the opinion of the court although we vehemently disagree with their decision today,” said Odinga, who served as a political prisoner in the 1980s and helped usher in Kenya’s multiparty system. “This judgment is by no means the end of our movement.”

Ruto, for his part, applauded the judgment, praising the independent election commission and its chair, and describing the judiciary as “the hero for our democracy and the rule of law and constitutionalism.”

The election, which pitted two of Kenya’s most powerful politicians against each other, had been closely contested, with the chair of the independent election body announcing Aug. 15 that Ruto — who pitched himself as a “hustler” who would best represent Kenya’s poor — had won about 50.5 percent of the vote, compared with Odinga’s 48.5 percent.

Minutes before Wafula Chebukati, the committee chair, read the results, four of the seven members declared they could not stand by the results because of the “opaque nature” of the process.

Odinga’s legal team argued that Chebukati had allowed the electronic voting system to be infiltrated by foreign agents and that he had overstepped his authority by announcing results without the consensus of the commission. Koome said the court found “no credible evidence” of the first claim and determined that the four commissioners provided little proof for their claims and in fact participated in the process until the “11th hour.”

“Are we to nullify an election on the basis of a last-minute boardroom rupture, the details of which remain scanty and contradictory?” said Koome. “This we cannot do.”

Koome also criticized Kenya’s election body for its dysfunctionality, saying the commission needs “far-reaching reforms.” But she said that the infighting had not affected the body’s ability to carry out the election according to the standards laid out by the constitution. She dismissed claims made by Odinga’s team that there were significant differences between paper tallies at 46,229 polling stations and those uploaded to the online portal.

The election and its aftermath have been closely watched within Kenya and abroad, including Washington, where Kenya is considered a beacon of stability in East Africa and a key partner on counterterrorism efforts.

International and domestic election observers gave the process generally high marks, which legal experts said meant that Odinga, who successfully challenged his loss to the incumbent president, Uhuru Kenyatta, in the 2017 election, had a higher bar to prove this time around. He had framed his legal fight as “a do-or-die battle for the corruption cartels who have everything to lose to the forces of democracy.”

Although this election has generally been peaceful, some feared that a ruling against Odinga could trigger unrest among his supporters, since the campaign was largely viewed as his last shot at the presidency. Post-election violence following the 2007 election loss to President Mwai Kibaki left more than 1,000 dead and 600,000 displaced. The period following the 2017 election was also marred by violent street protests and human rights violations.

Ahead of the ruling, Kenyan police heightened security in parts of the country with histories of election violence. In Nairobi on Monday, some schools announced they would be closing early.

After the ruling, massive celebrations broke out in Ruto strongholds in central Kenya and the Rift Valley. On Kikuyu Road in Nairobi, Mary Wangari, 35, said that she stopped deep-frying her potatoes for a minute when she heard the ruling.

She and two sisters had fled the Rift Valley city of Eldoret in 2007 amid post-election violence. Wangari said she hoped things would remain calm and could not understand Odinga’s decision to challenge the results.

“This election was different,” she said. “Everything was put out there for all to see. Why are they not accepting?”

In Kisumu, Odinga’s hometown in western Kenya, Charles Olongo said the streets were unusually calm after the verdict.

“People know that they have to move on with life,” said the 39-year-old taxi driver.

By Rael Ombuor and Rachel Chason
The Washington Post