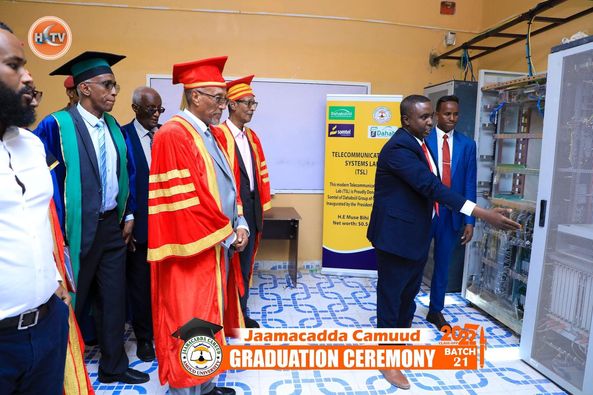 SOMTEL Telecommunications International, one of the leading companies of the giant Dahsbhiil Group of Companies, has today unveiled the most expensive, single donation to Amoud University.

The TSL equipment is estimated to have cost the company a whopping US$700,000.

His Excellency the President of the Republic of Somaliland, Musa Bihi Abdi, who was there to attend the university’s yearly graduation ceremony, cut the ribbon off the site.

CEO Mohamed Nouh Duale, SOMTEL’s top leader, briefed the President, the University Rector, and a bevy of faculty deans, central government, and regional leaders on how the system worked and what far-reaching benefits it held for the university’s telecom teaching/learning activities.

Dahabshiil Group, which also incorporates the remittance and banking wings as well as automotive dealing, electricity, industry, oil terminal and general trading. The Group has never failed to deliver in a timely manner, according to records, where a helping hand was absolutely necessary not only in Somalia and Somalia but across the region both in the Horn of Africa and East Africa as a whole.