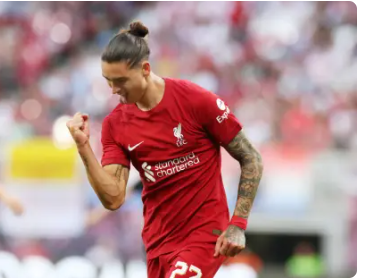 The Uruguayan striker has come under some pressure from fans and pundits during his time on Merseyside.

The arrival of Darwin Nunez from Benifca was always going to be a big shock for the Liverpool dressing room and present new challenges to manager Jurgen Klopp.

A reported fee of £67.5 million was always going to increase the expectations for Nunez after his move was completed.

A goal in the Community Shield followed by a goal and an assist on his Premier League debut against Fulham only increased the hype around the Uruguayan.

However, not all was plain sailing for Nunez after he was sent off against Crystal Palace for a headbutt on Joachim Andersen, ruling him out for three games.

Following this difficult run for Nunez, a report from El Pais has claimed that Liverpool officials have labeled the striker as Klopp’s biggest mistake as a manager.

According to the report, officials believe that the striker was not worth the fee that was paid for him, given the ability that he has shown in recent games.

Nunez was uninspiring when the Reds faced off against Everton, eventually drawing 0-0 with the Toffees.

With the nature of how the Liverpool board do their business, it is unlikely that a leak like this would have happened.

It is also FAR too early to judge a player when he has only appeared four times for the club and the board most likely know it.