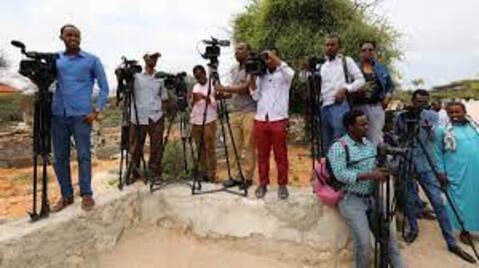 Raid on Somali Journalists Syndicate Seen as ‘Attack’ on Media

The Somali Journalists Syndicate is coming under pressure from the government, with authorities trying to enter its offices in Mogadishu and arresting the organization’s secretary-general.

Analysts think the actions may be related to a government order banning media coverage of militant group al-Shabab.

Security agents had been caught on camera trying to gain entry to the offices of the syndicate, known as the SJS. Then on Tuesday, authorities detained the group’s secretary-general, Abdalle Ahmed Mumin, at the city’s international airport.

The actions rattled Somalia’s media members. Mohamed Ibrahim, syndicate president, said, “On behalf of Somali Journalists Syndicate and entire Somali media fraternity, I condemn the arrest in the strongest terms possible and call for the Somali government to release him immediately. Also, this attack represents an attack to all Somali media.”

The raid came shortly after the SJS and three other media organizations jointly protested a government directive against publishing content from al-Shabab.

The Ministry of Information has said media should not publish content from the militant group. It also blocked access to 40 social media accounts and websites deemed to be affiliated with al-Shabab.

Journalists warn the directive could be used against independent media.

Authorities on Wednesday said Mumin had been detained on a “security-related charge,” but Ibrahim questioned whether it could be linked to the joint statement protesting the order.

“The government has not consulted the Somali media stakeholders at this directive and also it represents and also shows how the Somali government is trying to manipulate and silence independent voices,” he said.

Neither the police spokesperson nor the Ministry of Information responded to VOA’s requests for comment.

Many journalists are dismayed at the government order, which they say could endanger them and curtail the freedom of expression and the public’s right to know.

“Al-Shabab immediately issued a warning against those who obey the order,” he said. “So you can feel [at risk] because the reporter is not driving a bulletproof car and is not armed.”

Security analysts argue that the Somali government is caught in a difficult situation, trying to balance the rights of journalists with securing victory against al-Shabab.

Abdiaziz Hussein Issack, a security analyst with the Hamad Bin Khalifa Civilization Center, a cultural and research center in Denmark, said, “I think that the government’s decision is a double-edged sword. If the decision is used and implemented well, it would be a good thing and productive. Terrorist propaganda can be stopped and freedom of speech can be protected. But if any party tries to use it for its own interest, it will be dangerous.”

According to Issack, journalists must avoid sensationalizing terrorism. “The journalists and the media should report what happened but avoid exaggeration or propaganda issued by the terror group,” he said.

Al-Shabab has proved adept at using online platforms and social media to spread its propaganda.

President Hassan Sheikh Mohamud declared last week that there was no neutral position in the war against al-Shabab, saying, “You are either with the government or the terrorists.”