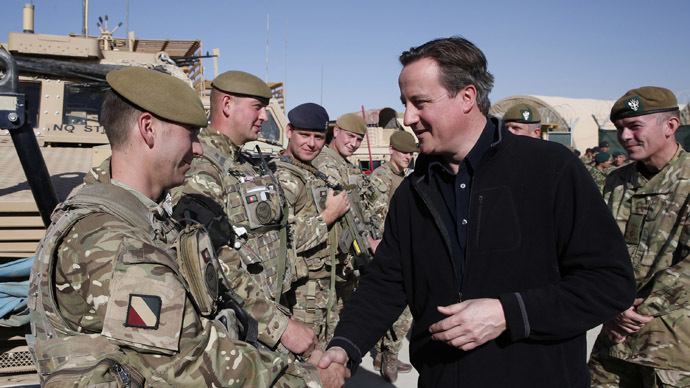 UK Prime Minister David Cameron has made a name for himself when it comes to supporting yet more wars abroad, including events in Libya, Syria and now Ukraine. But more often than not, such warmongering has come back to bite Britain.

Back in 2010, Cameron stated that Iran has a “nuclear weapon,” when asked about why he was backing Turkey’s bid to join the EU.

He responded that Turkey’s accession could “help solve the world’s problems, like the Middle East peace process, like the fact that Iran has got a nuclear weapon.” This comment was followed by a staged apology during a meeting with Pakistani President Asif Zardari.

Cameron also attempted to pressure the American Congress over sanctions on Iran right ahead of his visit to the US, but Republicans called it an unproductive move.

Cameron had to give some explanation during his joint conference with President Obama, saying he was not telling “American Senate what it should or shouldn’t do,” but was only advocating the UK’s position.

“So I am clear: taking action in Libya, together with our partners, is clearly in our national interest,” he said at the time. “Anyone who thinks Gaddafi has any role [in ruling the country] should forget it.” Back in 2011, Cameron visited Tripoli with France’s then-President Nicolas Sarkozy to declare victory over Muammar Gaddafi’s regime in what turned out to be premature celebrations with the rebels.

He faced heavy criticism after his visit, as the fighting in Libya was still in full swing. Cameron came in for greater disapproval after ISIS attacks that killed Coptic Christians in Libya last week.

“The actions we took there and the decision to intervene was an international one,” he said in a recent interview, while noting that Libya shouldn’t become a “safe haven for terrorists.”

Cameron, while advocating attacks against the Syrian government, admitted he was not “100 percent certain” that Assad was behind a recent chemical attack, but that it was “highly likely.”

“This is not like Iraq, what we are seeing in Syria is fundamentally different … We are not invading a country,” he insisted.

“This is not like Iraq and it’s different to Libya as well. This is a bloody civil war. The idea we can provide a unilateral British military solution to this is fanciful,” Clegg said when criticizing Cameron’s push for military involvement.

Cameron has been calling for the international community to engage more closely with the Syrian rebels from the early stages of the conflict.

“Every effort should be made to secure a [UN] Security Council Resolution backing military action before any such action is taken,” Cameron said in the speech to the House of Commons in 2013. “We have a summary of the Government’s legal position, which makes it explicit that military action would have a clear legal basis.”

But Cameron’s attempts proved futile, as British MPs effectively ruled out UK’s involvement in a military campaign in Syria. The Libyan mistakes were apparently fresh in everyone’s minds. Cameron made his position towards Palestinians clear when he abstained from the British Parliamentary vote to recognize Palestine.

Following that ballot, Cameron resorted to criticism of Israeli boycotts.

“We oppose boycotts,” he said. “Delegitimizing the state of Israel is wrong, it is abhorrent – and together we will defeat it.”

Cameron also encountered heavy pressure from senior Liberal Democrats to implement a total ban on arms sales to Israel after hundreds of Palestinians were killed in Israel’s ‘Operation Protective Edge’.

“Throughout this coalition government, the Conservatives have adopted a less forthright approach to the Middle East conflict, in a way which I believe risks decreasing British influence in the region,” coalition partner Clegg said.

With conflict brewing in Ukraine, Cameron has announced that UK troops will support Kiev with tactical intelligence, training and logistics.

“Where we can help a friend in non-lethal equipment, we should,” Cameron said. “Over the course of next month, we will be deploying British service personnel to provide advice and a range of training from tactical intelligence, to logistics, to medical care, which is something else they have asked for.”

UK will also “be developing infantry program with Ukraine to improve the pure ability of the forces.”

On top of that, Cameron called for more sanctions against Russia, in addition to those implemented during the past year.

Cameron’s stance defies the actions of French and German leaders Francois Hollande and Angela Merkel, who are trying to push for a peaceful and diplomatic solution to the conflict. “We should keep up the pressure [on Russia],” Cameron said, noting that “in this respect the interests of the United Kingdom and democracy do go together.”

The PM’s most recent comments come after the Minsk peace talks, in which a ceasefire was agreed upon by the leaders of France, Germany, Russia and Ukraine.