The United Nations representative in Yemen has said that the Saudi-led coalition is bombing “effectively, trapped civilians”. 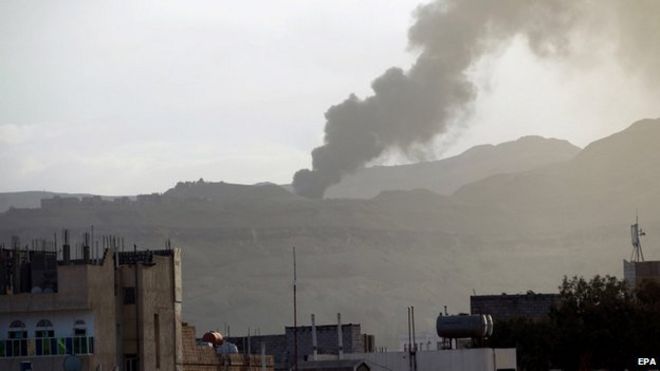 The UN also warned that the indiscriminate bombing of populated areas is against international law.

Air strikes have killed at least 1,400, more than half civilians, the UN says.

On Sunday morning air strikes in Sanaa targeted the home of former Yemeni President Al Abdullah Saleh, according the Yemeni news agency Khabar. The report adds that the former president and his family are unharmed.

Mr Saleh is allied with the Houthi rebels and has been accused by the coalition of destabilising the country. 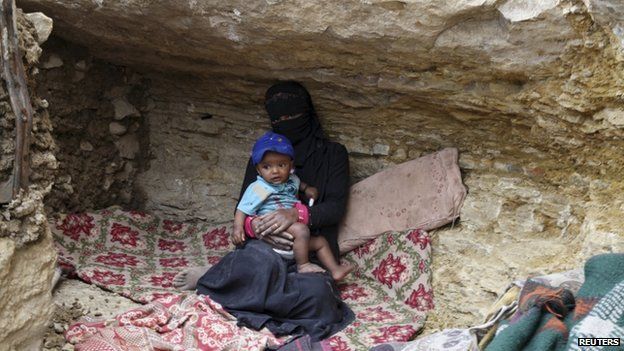 Some of Saada’s residents have sought shelter in caves

The UN’s humanitarian coordinator for Yemen, Johannes Van Der Klauuw, said he was “deeply concerned” by the impact of the latest air strikes on northern Yemen.

“Many civilians are effectively trapped in Saada as they are unable to access transport because of the fuel shortage,” he added.

The medical charity MSF, say that shortages mean many people can only flee on foot.

The Saudi-led coalition says it consider all of Saada a “military zone”. On Friday it dropped leaflets warning residents to leave.

Mr Van Der Klauuw said that the decision to target the entire province “will put countless civilians at risk”.

In a statement he added that many of Saada’s residents were effectively trapped due to a lack of transport and that the leaflet warnings did not absolve the coalition of its responsibility not to target civilians. 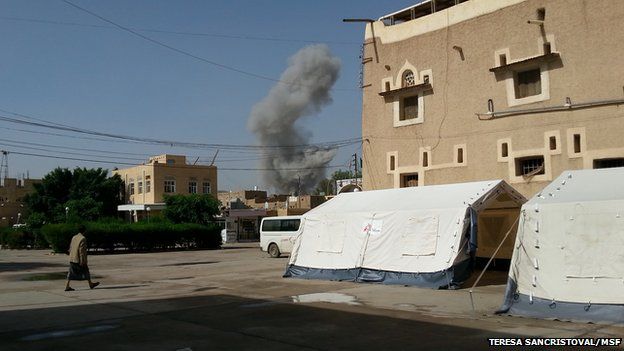 Teresa Sancristoval, the emergency coordinator for Doctors without Borders (MSF) based at Saada’s al-Gumhary Hospital, described intense bombing overnight, with reports of up to 140 strikes hitting the city in total.

She said her team had been treating seven pregnant women who were in labour, but five of them fled due to the intensity of the air strikes.

“The population that remains is very scared and worried… The market, storage facilities and government buildings have been destroyed and many civilians are suffering the consequences,” she said.

Up to 130 strikes took place across the country on Saturday targeting rebel buildings, weapons stores and camps, a coalition spokesman said.

A spokesman for the Saudi-led coalition, Brig Gen Ahmad Assiri, said it was in response to Houthi rebels firing shells into Saudi Arabia earlier this week, killing 10 people.

However, the Saudis have accused the Houthi rebels of hiding troops and weapons in civilian areas to prevent them being targeted by airstrikes.

The UN has called on all parties not to locate “military personnel and assets in densely populated areas, thereby endangering civilians.”

Saudi Arabia on Friday offered a five-day truce, which would start at 23:00 local time (20:00 GMT) on Tuesday.

But senior Houthi official Mohamed al-Bukhaiti told the BBC that the ceasefire had not been formally proposed and the Houthis would not respond until a plan was properly laid out.

Sunni Muslim Saudi Arabia has accused Shia rival Iran of arming the Houthis, a charge Iran and the Houthis deny.

The Saudis have been sheltering the internationally recognised Yemeni President Mansour Abdrabbuh Hadi, who fled there in March.