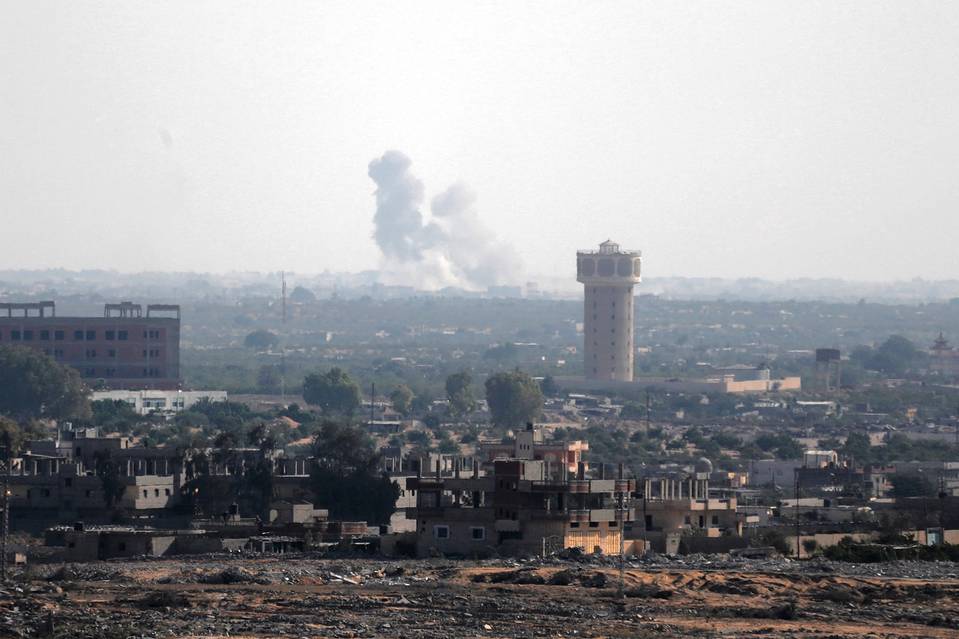 Fierce fighting between Islamist militants and Egyptian army forces in the northern Sinai Peninsula on Wednesday left at least 117 people dead, state media said, in the bloodiest clashes between the two sides since Hosni Mubarak was forced from power in a popular revolt four years ago.

The violence, which erupted two days after Egypt’s top prosecutor was assassinated in a suspected militant bomb attack in the Cairo suburb of Heliopolis, underscored the government’s vulnerability in the arid, thinly populated Sinai, where the army’s stepped up counterinsurgency operations have so far had little success in quelling Islamist rebel groups, Western officials and analysts say.

The Islamist group Sinai Province, a local affiliate of Islamic State, said it carried out three suicide attacks and battled Egyptian security forces at more than 15 sites in the northern Sinai, according to a statement distributed by the SITE Intelligence Group, which monitors and verifies global jihadist activity.

In a sign of the fighting’s intensity, Egypt’s air force deployed F-16 fighter jets and Apache attack helicopters to Sinai to reinforce ground forces, who Egyptian officials said were slowed by improvised explosive devices planted along roads by Islamist fighters.

Seventeen government soldiers were killed and 13 wounded, said a statement late Wednesday by the armed forces on late Wednesday, as the fighting subsided by nightfall and security was beefed up around the Suez Canal. More than 100 militants were also killed, the statement said.

The statement didn’t explain the discrepancy with earlier official statements indicating 60 soldiers had been killed and wounded in combat. None of the casualty tolls could be independently confirmed, as the government maintained a two-year restriction on media access to the northern Sinai.

Smoke billowing from explosions was seen across the border in Israel, where Prime Minister Benjamin Netanyahu condemned the attacks as acts of “vicious terrorism” and extended his condolences to Egypt’s government, its people and the victims’ families.

Israel also closed its border crossing with Egypt in the northern Sinai in what it said was a security precaution.

In Washington, the White House also condemned the attacks on Egyptian security forces.

“The U.S. stands resolutely with Egypt amid the spate of terrorist attacks that have afflicted the country and, in the context of our long-standing partnership, will continue to assist Egypt in addressing these threats to its security,” said Ned Price, spokesman for the National Security Council.

Egypt’s military has been the focus of antigovernment anger in Sinai since it led the coup in 2013 that forced President Mohammed Morsi, a top Muslim Brotherhood official, from office. Mr. Morsi became Egypt’s first freely elected leader in June 2012, some 15 months after mass protests that became emblematic of the Arab Spring swept Mr. Mubarak from office. 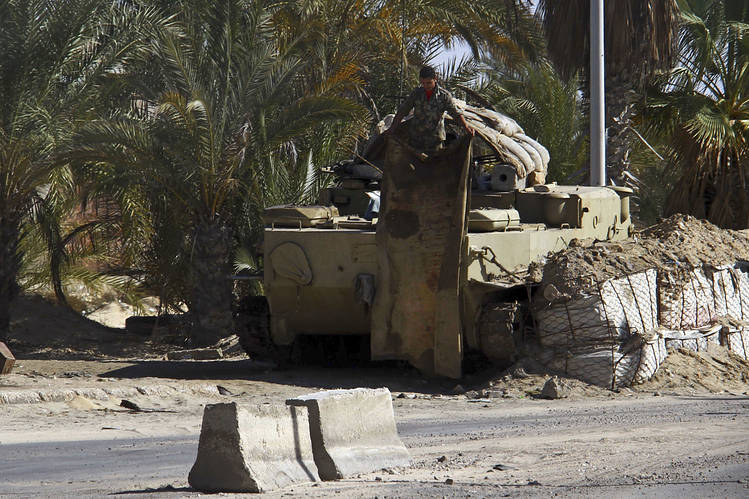 An Egyptian soldier stands on an armored vehicle in el-Arish, north Sinai, Egypt, in a file photo from January.PHOTO: ASSOCIATED PRESS

The government has regularly accused the Brotherhood of being responsible for the wave of militant attacks on police and military installations in Sinai and elsewhere in Egypt that followed the coup, allegations the Brotherhood has denied.

Although there has been no clear claim of responsibility for Monday’s killing of state prosecutor Hisham Barakat, the government blamed it on the Brotherhood. Rights groups say thousands of supporters of Mr. Morsi and the Brotherhood have already been killed and jailed in a crackdown by Egyptian authorities.

As the fighting raged Wednesday in the Sinai, security officials said police officers killed nine armed members of the Muslim Brotherhood in a Cairo suburb. The police officers came under fire as they attempted to arrest the men, the officials told state media, and returned fire “liquidating” the threat.

In a statement issued by their London office, the Brotherhood said the victims were unarmed group and had been meeting to coordinate support for the families of detainees. The group included a former Muslim Brotherhood member of parliament and several senior members of the group, the statement said.

Egypt’s cabinet backed also calls by President Abdel Fattah Al Sisi in the wake of Mr. Barakat’s death for tougher antiterror laws, approving legislation that will enable the country’s judiciary to expedite terrorism cases through the courts. The law is expected to be ratified by Mr. Sisi, who holds exclusive legislative authority in Egypt in the absence of a parliament.

The Sinai clashes underlined the increasing strength of Islamist militant groups in Egypt and the ineffectiveness of the country’s military, Western diplomats and analysts said.

A Western official familiar with the government’s security operations in Sinai said the effort, which has included house demolitions and the forced relocation of thousands of residents, has fallen short. “If you’re a state and you’re in a stalemate, you’re losing,” the official said.

Khalil al-Anani, a Middle East scholar at the Johns Hopkins School of Advanced International Studies in Washington, said the fighting was a setback for Mr. Sisi.

Together with Mr. Barakat’s assassination, Mr. Sisi will face an uphill battle persuading the Egyptian public and foreign governments that his promise to return security and stability to the Arab world’s most populace country is on track, Mr. Anani said.

“Sisi is very weak right now,” he said. “These attacks reveal how vulnerable his regime is despite his professing and projecting strength. He was a military leader, and he’s failed to prevent these attacks.”

Since emerging in 2011, Sinai Province’s growth has been aided by the government’s difficulty in controlling such a vast and inhospitable swath of territory, which eases weapons smuggling from Libya and the Gaza Strip, according to Egyptian and Western analysts.

The group’s recruitment of fighters has also been helped in northern Sinai by long-running political and economic grievances against the central government.

After the mass protests that forced Egypt’s longtime ruler Hosni Mubarak from office in 2011, Sinai Province claimed responsibility for sporadic bombings on gas pipelines in the peninsula that are linked to Israel and Jordan.

Sinai Province pledged its allegiance to Islamic State last year and although it views the Muslim Brotherhood as apostate, it has criticized the military-led coup against Mr. Morsi as a return to a Mubarak-style authoritarian government and declared war against Mr. Sisi’s government.

What is the U.S. Military Doing in Africa that They Are Not Saying?

Rishi Sunak and the Curious Arc of History

US Militarily Trying to Shoo Away China, Russia From Africa